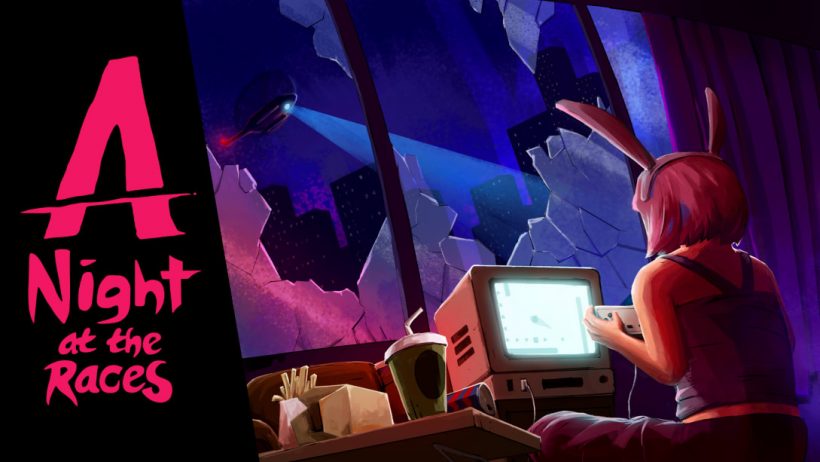 Life lesson number 432: don’t change horses midstream. The idea being that it’s inadvisable to try to make changes to a situation that is already underway. Going for a large straight in Yahtzee? Don’t reroll all the dice on your third, and final, attempt. Playing in a video game tournament? Don’t let a shootout, riot, or societal upheaval stop you from competing.

A Night at the Races, a game within a game, shows just how much dedication to a course of action one determined gamer can have.

Placed in a dystopian world that, as all dystopian worlds go, is an easily-imaginable parallel to our own, players are plopped into the small apartment of the protagonist. There is no dialogue, so all there is to go on are infrequent messages you can check in-between intense gaming sessions.

Storytelling in A Night at the Races is the opposite of dramatic irony: we know next to nothing about the main character other than what might be gleaned from the aforementioned messages. A note slipped under the door, warning of an imminent eviction, informs players that they are desperate for money, but there is no explanation as to what happened to create these financial woes.

Gameplay consists of two different styles: a simplified point-and-click adventure when we are in the real world, and a very fast paced and precise action platformer akin to Super Meat Boy called No Berry Left Behind.

No Berry Left Behind is where the majority of the gameplay in A Night at the Races comes from. With 200-ish levels to plough through, you are a squishy, squashy, square white berry who must bounce around each level collecting every other berry before reaching the exit.

Controlling the berry is easy to say but difficult to do. Use A to jump; the length of time you hold A for will determine the length and height of the jump. R or ZR will make the berry dash. Being very precise with these controls will turn you from frustrated newbie into an accomplished hardcore gamer.

The difficulty curve is steep and levels can become frustratingly hard, especially if you are not a fan of games like this. Caution: this game may induce controller-throwing rage. Thankfully, you can go into the settings and adjust the speed at which your berry moves: anywhere from 60 to 100%. This is a serious saving grace for people who aren’t great at platforming.

The extremely interesting main story of A Night at the Races is somewhat locked behind No Berry Left Behind. Only after you’ve completed each stage in a level will you be taken back into the troubles of the game’s real world. This is mildly frustrating, especially since the story is so intriguing. Thankfully, you can simply hit + and skip any berry levels that are giving you too much trouble.

Graphically, the game’s real world setting uses a dark and dreary pixelated palette that really evokes a not-so-distant dystopian future. That’s juxtaposed with the brighter, more colourful world of No Berry Left Behind. It’s full of bright blues, pinks, and greens, but there is still a hint of bleakness in the backgrounds that the berry quickly bounces past.

The amazing techno-sounding chiptune music that plays while you’re a berry is the best tasting ear-candy. It contrasts nicely with the grim silence and sound effects in the real world. Two thumbs up.

To top it all off, there’s an online leaderboard to keep competitive types coming back for more. If you like challenging platform action, then A Night at the Races is a game for you.

A Night at the Races is a challenging arcade platformer that will put your fine motor skills to the test. If you’re a fan of the genre, definitely pick this one up as the story is quite juicy.