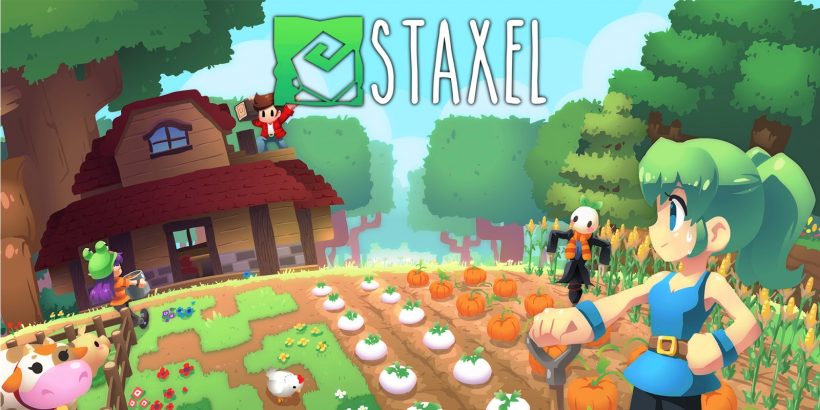 Will Minecraft have to moo-ve over, or is this game a load of old crop?

Staxel is a building/farming simulation set on a cute, colourful island. You start out on a small farm with a rundown house, but before long you’ll be able to turn it into a fully-fledged home with your own array of crops and cattle to tend to.

Visually, it’s obviously inspired by Minecraft, with the same basic blocky aesthetic we’ve all grown used to seeing over the years. The gameplay feels like a blend of that game, Harvest Moon, and Stardew Valley, with a dash of Animal Crossing sprinkled in too. In fact, Staxel takes ideas from these titles like they’re an all-you-can-eat buffet, resulting in a game which tries to do a lot but doesn’t quite manage to perfect any of its features.

The farming is the most enjoyable component of the game. Planting crops, watering them, and expanding your farm creates a nice gameplay loop, albeit one many players will have experienced before. Animals like cows and cats are a cute addition, and it’s fun to see them mooching about your farm throughout the day. You can sell your crops or produce for currency or use them to bake certain dishes in the kitchen, though you’ll need various cooking stations to chop, boil, or bake your items.

Providing a very relaxing feel, fans of more laidback titles will appreciate the vibe that Staxel aims for. There are no enemies or hunger meters to contend with and no way to die or lose progress. You can play at your own pace, and the music is pleasant too. You can also play with up to three friends, which can be fun if you’re able to find people to share your village with.

Building is a little less enjoyable, and the way it’s executed feels needlessly convoluted and irritating. You have to use different work stations depending on whether you’re sawing, assembling, carving, or constructing, which is a pretty big over-complication for something many games have done better in the past. A simple crafting menu would have made more sense, but, as it stands, you’ll have to move between these different stations constantly every time you make a new item, and this gets tiring fast.

Inventory management and menu navigation are both needlessly frustrating too. It’s less intuitive than Minecraft, and it takes far too many steps to find what you need in each menu. This leads an otherwise relaxing game into disappointingly-annoying territory. Crafting items is just too fiddly, and I was uninterested in building as a result. Certain things like animal pens or new homes require you to place markers which limit the area you can work with. It feels like the developers were overthinking it a little when designing the building/crafting mechanics, and Staxel fails to stack up to its competitors in that regard.

Thankfully, the game offers other ways to spend your time. There are bugs, fish, and fossils to collect, and a neat section in the journal showcases everything you’ve found. However, collecting them can be pretty menial. Fishing is basic, and all the fish I sold were far less valuable than the bugs (which are easier to catch in comparison). There are bugs all over the island, but strangely they don’t seem to react to the change in weather or time of day. Butterflies will still be everywhere at night, or even during a storm, which feels a little strange.

Exploration is generally limited, and the island you inhabit is extremely small. The village is bustling and there are lots of things to buy, and sometimes special events like festivals will take place there. You can grow bonds with your villagers, build homes for new arrivals, and take on delivery tasks for them. None of this was particularly exciting, but it helps the game world feel a lot more alive.

New areas can open up as you play, and more things to collect become available over time. However, it was difficult to get truly invested in Staxel compared to its main influences. Some players will appreciate the interactions between villagers and the new discoveries you can make, but other games have already mastered all the things Staxel sets out to achieve, meaning it feels like a game we’ve all already played.

Staxel does have a creative mode where you’re free of the restrictions the main game places on you, but this ditches the gameplay loop of buying and selling crops to make a living. If you like building, this is a nice way to make sure you can create anything you feel like, but I prefer the standard mode because each day feels a lot more meaningful. Expanding your farm is more enjoyable if you don’t take the easy route, but if you’re not fond of the standard gameplay the option to speed things up is always there.

Ultimately, Staxel isn’t a bad game at all, but it doesn’t offer much in the way of originality. Everything here has been done before, and done better, so the game doesn’t really leave much of an impact. Staxel is worth a try if you’re a huge fan of farming/crafting games, but most players will find more enjoyment in the classics that inspired it.

Staxel offers some fun gameplay, but it retreads a lot of familiar ground in the process, and nothing about it stands out as unique or exciting. Fans of the genre might like it, but don’t expect any innovation here.