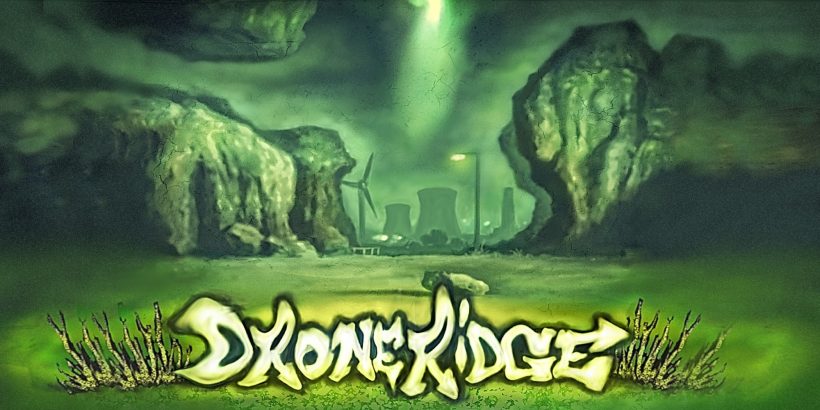 Ah, gravity. Where would we be without you? Well, we could be anywhere, quite frankly, but gravity keeps us grounded in much the same way it would your spacecraft in DroneRidge, were it not for its thrusters. If you want to go anywhere, you’ll need to use them with a careful eye on not exerting too much speed and colliding with a cavern wall. Yes, this is a skill-based arcade game in which – through 20 levels – the player must collect objects and reach the landing pad while a tight time restriction counts down, and careful control is essential.

Refreshingly, z80Dayz have opted to offer up all 20 levels from the beginning of the game, allowing for them to be attempted in any order that you wish. Each level is labelled Easy to Very Hard, typically allowing less than two minutes to reach the landing pad. Get stuck on one, and you can try another. Your craft can steer left and right and thrust, while also coming equipped with a front-firing blaster that can be used to eliminate certain obstacles. Before reaching the landing pad, stars or balloons must be accumulated. The stars must be touched by your spacecraft, while the balloons alleviate the pressure a little as they can be shot from a distance. But without amassing the required number of either, you won’t be able to settle on the landing pad and complete the level. This basic set-up is tweaked for some of the challenges however: one level limits your vehicle to spinning right only, while another doesn’t allow you to shoot. One of the hardest levels has your thruster on at all times, which means that your only means of reducing your inertia is to spin.

There are two important gameplay elements that need to be in place for successful thrust-based spacecraft control: fluid controls and pixel-precise collision detection. DroneRidge achieves both. An unexpected end with a cavern wall or a missile never feels unfair; defeat is always down to human error. This is important, because it’s this state of fair play that lures you in for just another go; another attempt to beat that level (there are halfway checkpoints that alleviate the pain a little) and gain a better score. There are bronze, silver, and gold medals to claim too.

The action takes place on a barren industrial landscape, almost ethereal in appearance. There’s a simplicity to sprite design which lacks a little character, although the rocky landscape, punctuated with occasional graffiti and derelict mechanical structures, serves up a unique look. Sonically, DroneRidge is lacking. Sound effects are sparse, although those that can be heard — most often the whirr of machinery — manage to create a sense of foreboding amongst the silence. This feels like a game that would benefit from a soundtrack, to immerse players into the challenge more fully.

DroneRidge is a neat package of gravity-defying encounters with a simple but effective goal structure. There’s little replay value, unless you’re tempted to shave seconds off your completion time (you’ll get a rather pleasant rainbow over your spacecraft if you manage to land perfectly), and there’s nothing particularly new to experience in the concept. There’s no attempt to provide a story either; you just select a level, hunt down those stars and balloons, and reach the landing pad. If you like the idea of testing your reflexes — in space! —  against the clock, DroneRidge will provide entertainment for a couple of hours.

Generous enough to offer all 20 of its challenges from the outset, DroneRidge is a test of reflexes through a distinctive landscape. There’s little original content in this short diversion, but it’s worth it for the rainbows.