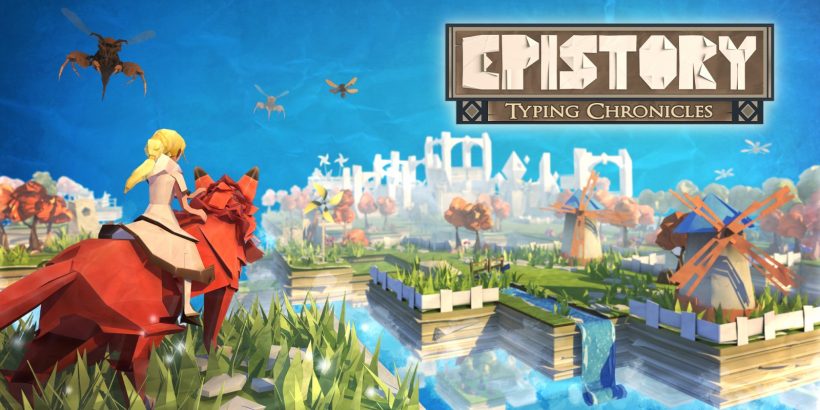 I wasn’t sure what to expect from Epistory – Typing Chronicles before playing it. Looking through screenshots, it reminded me a lot of Lost Words: Beyond the Page, which I adored. But this game differs on so many levels and they can’t really be compared. They’re both special in their own ways.

In Epistory – Typing Chronicles you play as a girl riding a giant fox in a world where the story is initially untold. As you make your way through its origami world, the story literally unfolds in front of your very eyes. It’s said to be a tale of somebody experiencing writer’s block, and using their muse to help them through it but, honestly, I didn’t pick that up from playing.

Epistory – Typing Chronicles is totally unique in the way that it can be played. Typing games aren’t a new thing, at all. But they are for the Nintendo Switch, understandably. Upon first loading up the game, you’re greeted by a message stating that the preferred way to play is by plugging a keyboard in. It’s not a problem if you don’t have a keyboard though, as you can still use the Joy-Con to play, though I would say you’re not getting the intended experience this way. Instead of being given words to type out, you will be given a sequence of button presses.

At first, you’ll learn the ropes wandering around some quiet countryside, only having to destroy logs. Anything you do in Epistory – Typing Chronicles, apart from your movement, is controlled by typing words with your keyboard. It’s simple: the more words you string together, the more points you will gain and the more points you gain, the more EXP you will gather. EXP is used to power up your muse, in many ways.

The game will gradually throw more things into the mix as you unravel the world, introducing different enemies and allowing you to unlock more abilities to cross into new territory. Epistory prevents you from travelling to newer areas too soon by displaying words in unknown languages; only when you’ve learned each language will it change to English.

Power-ups can be purchased pretty early on in the game but only a few will be available to upgrade straight away, with others unlocking as you progress through the game. These come in the form of your fox’s walking and sprinting speed, improving magic, and even having more time to type out words, just to name a few.

One of the most interesting things about Epistory – Typing Chronicles is that it has an adaptive difficulty. If you’re typing words faster, it will make the words more difficult. It works the same if it notices you’re a slower typer. All words are somewhat related to the item you’re working on too.

The World of Epistory – Typing Chronicles is a pretty one. But, at times I felt like it could have been sharper since some of the features (trees, rocks, even enemies) look quite jagged. It’s wonderfully narrated, though, and just like Lost Words: Beyond the Page, the words are sprawled out as you walk by, which is a nice touch.

I didn’t really encounter any performance issues whilst playing, but I did notice one thing that bugged me quite a lot. When moving my fox, it would randomly stop still every few seconds, as if I was bumping into invisible walls. This happened even when sprinting, which meant I had to press the sprint button a second time, making the feature almost meaningless.

This wasn’t an issue that ruined the experience for me though, it just frustrated me slightly. This is absolutely a game you should experience.

Overall, Epistory – Typing Chronicles is a beautiful and touching experience that also doubles up as a way to improve your typing skills. Though it can be played with Joy-Con, keyboard is absolutely the way to go.