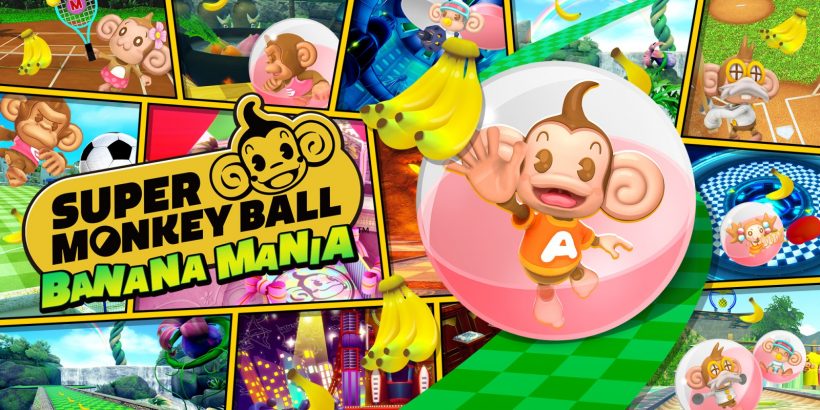 The classic Super Monkey Ball games have finally been re-released on modern consoles in a new content-rich collection from Sega.

Super Monkey Ball Banana Mania combines Super Monkey Ball 1, 2 and Deluxe into one package, offering tons of monkey-rolling action, and fans of the originals will be pleased to know they’re mostly faithful to what came before. Each level has been remade in a new engine, and the physics and course design manage to replicate the original action pretty well. However, despite the amount of content here, it’s not quite the perfect collection fans have been hoping for.

The main draw here is the smorgasbord of remade levels available to complete. There’s a story mode straight out of Super Monkey Ball 2, all the original stages from the very first title, and an unlockable DX mode which brings in extra levels from the Deluxe version. Certain stages have been rebalanced, but the experience is pretty similar to those original games.

Naturally, rolling monkeys down different wacky courses is a blast, and the simple control scheme is easy to learn but difficult to master. Some levels are a breeze, and others will test even the most seasoned gamers. In fact, the spikes in difficulty can be incredibly jarring, with certain levels feeling more cruel than challenging.

Thankfully, Banana Mania has a lot of accessibility options to assist you when you get stuck. This is a nice addition, and anyone who’s really struggling can always fall back on features like Helper Mode where you can slow down time to tackle a particularly tough trial. However, many players will find some levels much harder to complete, especially if you have any kind of controller drift. The controls are extremely sensitive and some courses require a surgeon’s precision with the joystick, so be prepared for some painful moments.

Overall though, the game is a lot of fun. The developers weren’t afraid to get crazy with the course designs in these games, and many of them are as bizarre as they are enjoyable. Bonus modes add even more variety to the mix too. Golden Banana mode sees the player collecting all the bananas in a series of courses, while Dark Banana mode forces you to avoid them as you head towards the goal. The former was pretty nice to play, but the latter was absolutely punishing.

There’s even a mode where you play through stages in reverse, and all these modes are unlocked through easily-acquired points in a shop (along with a plethora of other bonuses). You can get costumes for your monkeys and visual filters, but most exciting is the array of unique characters you can purchase. Sonic, Tails, Kazuma Kiryu from Yakuza and Beat from Jet Set Radio are all unlockable, and you can get them really quickly too. I ended up playing most of the game with Sonic and Tails, but unfortunately you can’t take these characters into the multiplayer modes.

Party games from the originals are available here, and you can play with up to four players in local multiplayer or simply head in alone. Sadly, these modes aren’t playable online, which feels like a missed opportunity. For a game that feels like a celebration of all things Super Monkey Ball, limiting multiplayer to local play is disappointing.

Some of these multiplayer modes are a lot better than others. For every good minigame there’s a pretty forgettable one. For example, Monkey Target is a classic, but Monkey Soccer controls like a group of drunks kicking a ball around an alleyway. Monkey Shot is a basic on-rails shoot-em-up with nothing compelling to speak of, but the race and billiards games are quite fun to play.

Still, Super Monkey Ball Banana Mania has plenty of solid content that makes it worthwhile, if rolling around in a ball is your thing. There’s a mode that challenges you to complete worlds from story mode as quickly as you can, and this is one of the more replayable modes on offer. Chasing new high scores is addicting, even if playing the same levels over and over might eventually get stale. The music is worth mentioning as well, because there are some genuine jams here.

For a game that brings in so many levels and minigames from Super Monkey Ball’s history, it does still feel like something’s missing. Some odd restrictions on which characters can be used in certain modes and the lack of online functionality hold it back from being as good as it can be. The unlockable modes like Golden Banana are limited to ten stages only, which turns them into more of a brief bonus than a fully-fledged mode.

Super Monkey Ball fanatics will probably find certain parts of this collection disappointing, but by and large Banana Mania succeeds at remastering the original levels and putting a fresh spin on those classic titles. Adding new characters from Sega’s catalogue was a great move, and there’s certainly a good amount of replayability here. If you’ve never played the series before, this is a good place to start. And if you loved the originals, Banana Mania is a great way to revisit them.

Banana Mania takes the best Super Monkey Ball games and combines them into one solid package. Frustrations from those original games remain, and the lack of online play is a disappointment, but new options allow for a less stressful time.