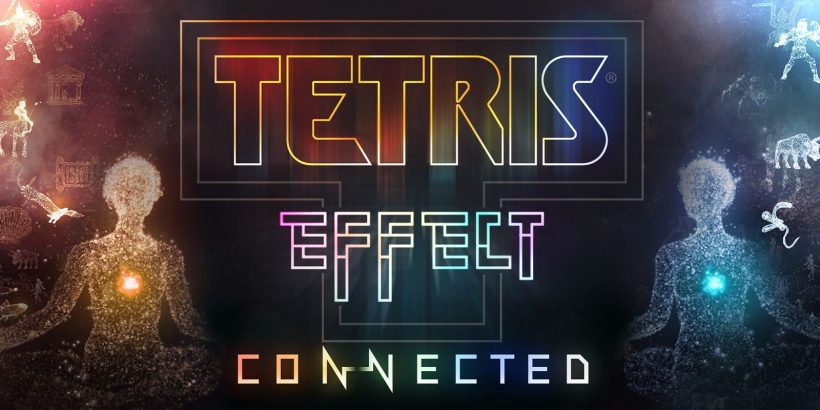 Tetris is one of those games that everyone has heard of. Its dominant release alongside the Gameboy, followed by subsequent outings in various forms, has made it synonymous with gaming itself. However, in all this time, no Tetris game has quite captured the magic of the original. Different modes and mechanics have come and gone, offering unique ways to play, but Tetris is Tetris. Its effect (wink, wink) comes from its innate simplicity. Tetris Effect: Connected realises this, bundling that core Tetris gameplay with psychedelic light and sound presentation that makes for an unforgettable experience.

Tetris Effect was originally released for PlayStation 4 in November 2018, and whilst its journey to Switch has been a long one, it’s most certainly been worth the wait. Tetris just feels at home on a handheld. Its short levels lend themselves perfectly to the pickup and play routine, bitesize blasts of fun perfectly filling those small pockets of time where you don’t want to commit to anything longer. That’s not to say the substance isn’t there, however. If you’re a Tetris virtuoso, there’s plenty of different modes to fill your time, ranging from calming to challenging, but it’s the Connected mode that sets this instalment apart.

Brand new to this version of the game, Connected mode sees you team up with two other players to take on an increasingly challenging gauntlet of AI bosses. It’s a mode not for the faint of heart, as your skills not only affect you but your teammates as well, and the AI soon ramps up in difficulty. Add to this random effects that significantly impact your ability to clear lines, such as preventing you from spinning your Tetrominos, and you’ve got one of the most complex yet rewarding modes Tetris has to offer. For much of the playtime, you’ll be focused on your own screen, clearing lines to fill up the Zone meter that, once full, combines each screen into one. During this time is where the cooperative nature of the mode comes into play, as you work together to clear your combined Tetrominos. It’s a more complex process than it seems, with a wrong move by one player causing a cascade of problems. It’s an exhilarating multiplayer experience, with the collaborative nature offering a refreshing change of pace.

If you wish to hone your competitive skills, however, this game can still bring the goods. A myriad of modes allows you to test your mettle against the rest of the world, as well as your friends, and a ranked mode provides plenty of reason to keep progressing. Speaking of progression, a levelling system throughout these modes works to scratch that itch, yet to middling effect. It’s certainly nice to see that progress bar increase as you tackle various challenges and events. However, the cosmetic rewards really don’t add much to the game, and it feels like a more superficial approach to increasing longevity than actual reward.

What makes this game shine, quite literally at times, is its visual presentation. This is the best Tetris has ever looked, and whilst it’s arguably not a game that needs standout graphics to be enjoyed, the way they have been blended here alongside the music makes for a sensory feast. Gameplay is tied to the beat of the music, with your very moves dictating the pulsing beats of rhythm and colour. What could easily be seen as a messy distraction from the core gameplay in a lesser game, instead feeds into the excitement and thrills of this one. Colours pop and flare to the rhythm of a stunning soundtrack, the intensity building as you progress through each stage, ever encouraging your puzzle-solving abilities. Mere words really don’t do this game justice; the effect only becomes clear as you play through its dazzling array of levels.

The soundtrack can’t be understated here either, it’s unique blend of styles ensuring each stage you play feels unique. Whether it’s the original vocals, the upbeat, exciting tracks, or those designed to evoke a sense of calm, every different style attempted complements the game perfectly. This is most notable within the game’s single-player mode. For anyone new to the series or simply looking to brush up on their skills, this is a good place to gradually improve your abilities. It’s by no means a lengthy campaign, but it’s a service that helps enhance all the game’s other modes, and its “Journey” title is truly befitting. As you travel through its many stages, the sensory mastery of this game becomes truly apparent, and by the end, you really will feel you’ve gone through an exciting and, at times, surprisingly emotional journey.

Tetris Effect: Connected is the ultimate way to experience Tetris. What was once simply an addictive puzzler has become a masterclass in presentation. The tying of the game’s music and visuals to the players’ very movements creates a stunning level of immersion that further enhances the varied and exciting gameplay modes on offer. This is core Tetris fun wrapped in a flashy but substantive shell, and the result is a game for the ages.

Tetris Effect: Connected is the puzzler as you’ve never seen it before. The whole experience is amped to the max, producing a game that dazzles not only the brain but the eyes and ears as well.