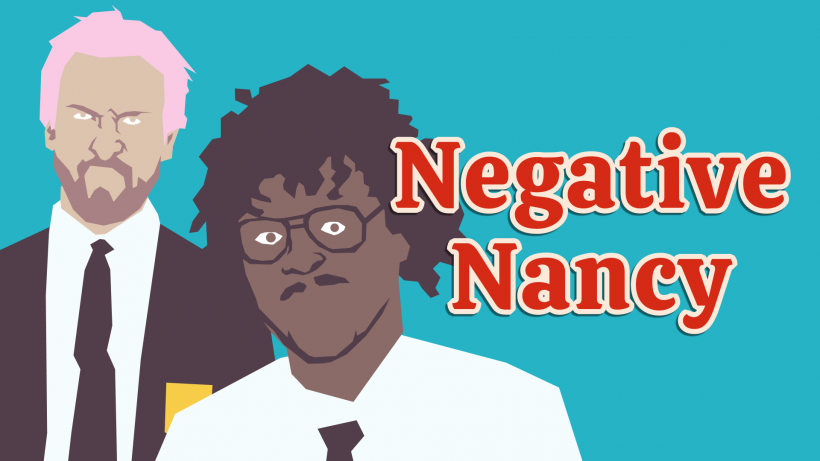 I think we’ve all been called a negative Nancy at some point in our lives, haven’t we? I know I certainly have. Just how negative is this particular Nancy, though, and is the experience as a whole a positive or a, well, negative?

Negative Nancy is a short visual novel game that sees players assuming the role of Nancy, a character who only has the word ‘no’ in their vocabulary. Nancy works an awful job at the Megamart with her best friend, and seems to make it her mission to annoy as many people as she possibly can by simply saying ‘no’. If you have ever worked in retail before, you will be wishing you could have reacted the way Nancy does in these situations – Nancy is my retail hero.

As is the case with most visual novels, the gameplay is minimal. The only options you have throughout are saying no – which you can say in response to pretty much everything –  or keeping quiet and not saying anything at all. Depending on what you choose, the outcome of the story will alter, slightly.  There are times where staying silent proves better for everyone involved, and others where it can be fun to repeatedly say no to someone in order to rile them up even further – an annoying ‘Karen’, for example.

Where Negative Nancy really shines is in its comedic writing and multiple branching storylines. It reminded me a lot of my own experiences within retail, and the characters you come across – while annoying at times – are certainly memorable. The story is set across four separate chapters, displayed as VHS tapes (which I found pretty cool), and these can last anywhere from ten to thirty minutes, depending on your choices. All four can be completed within an hour, making the game a little on the shorter side, but they are incredibly entertaining.

Nancy finds herself in some pretty unique situations, to say the least. One chapter has her working in a store arguing (or not arguing, depending on your choices) with some very rude, annoying customers, with another putting her in the hot seat and being interviewed by the police for murder.

There’s a little bit of replayability in Negative Nancy, both through trying out the various story branches, and also collecting ‘mementoes’ during each episode. There is a number to collect in the different segments, relating to the choices made throughout, and so you’ll have to play each a few times in order to collect them all – if that’s something that interests you.

Where Negative Nancy falters slightly is with its pop-art like graphics. Characters faces aren’t filled out, and the backdrop used in certain areas is often reused multiple times, making it feel a little lazy. There’s not a whole lot of detail within the characters or the areas you inhabit either, which dampens the impact of the experience.

Audio-wise, given that the only word Nancy utters is ‘No’, I would have liked there to have been a few more recordings of it. There are only around ten, and if your playthrough is anything like mine then you’re going to be saying that dreaded word a lot. What I also found strange was that every other character speaks in a jumbled way, so that you can’t make out what they’re saying. It’s strange that Nancy can enunciate ‘No’ so clearly, but none of the other characters talk that way.

Overall, if you’re a fan of short, easy to pick-up-and-play games with whimsical humour, Negative Nancy will be for you. It’s basic, but provides many laughs from simply saying the word no – and not having to deal with the repercussions of it…

While simple and a little on the short side with only a couple of hours of playtime, Negative Nancy is a fun and entertaining visual novel that thinks of some creative ways to say the word ‘No’.