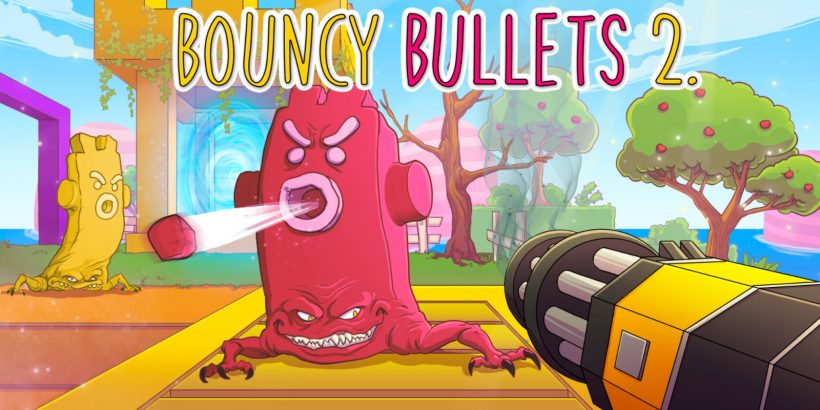 When you can experience all a game has to offer within a couple of hours, the question must surely arise as to whether it is worth it. Some games can achieve a lot in this time, whether it’s by forming attachments to certain characters or showcasing an exciting new gameplay mechanic, but the experience is still limited.

Shorter games have the difficult task of making you a part of their world quickly, teaching you the important things you need to know while also including enough content to let core mechanics breathe. Unfortunately, Bouncy Bullets 2 doesn’t manage to strike the right balance, resulting in an experience that never truly delivers on its central premise.

The core idea of Bouncy Bullets 2 is an incredibly interesting one. You make your way through a number of levels, facing different obstacles and enemies along the way. Said enemies are differentiated through colour; Red and Yellow foes are taken out by the corresponding bullet shot by your left and right triggers, whilst enemies in Black can only be destroyed by bouncing your bullets off surfaces.

It’s a clever mechanic that in theory should have you employ a thoughtful approach to combat, but in reality, feels completely underutilised and at most times redundant. I found the more complex enemies rather sparse throughout the game, and as such you never spend enough time with the gameplay techniques to master them. Even then, the game’s combat as a whole feels rather inconsequential.

This is a game clearly built around speedrunning, so as a result, each level can be powered through rather quickly. This being the case, the enemies rarely pose an actual threat. Most can be rushed by without incident, and the few times they need to be engaged, they don’t require any kind of skill.

Speedrunners are likely the only ones who are going to get any sense of satisfaction from Bouncy Bullets 2. A dedicated speedrunning mode allows you to challenge each level against the clock, so you can measure your best times. The bitesize levels lend themselves well to this kind of gameplay, but even then, it feels like a hollow experience. The lack of any sort of leaderboard means unless you spend the time actively searching online, you’re essentially just playing against yourself.

This can be fun for a time, but the process soon becomes stale. Furthermore, this emphasis on speedrunning comes at the expense of the levels themselves. Many have some interesting ideas on show, whether through design or their use of certain mechanics, however, their potential is never fully explored. Some levels play with verticality in an interesting way. Others contain sprawling mazes with hidden surprises that might test your reflexes. They often contain design elements that, while intriguing, are never really expanded upon.

Bouncy Bullets 2 has so much potential, so it’s a real shame that it misses the mark. Its titular mechanic isn’t utilised nearly enough, impeding what could have been a puzzling and unique take on the first-person shooter. Whilst its levels with their popping colours and funky soundtrack offer a glimpse at something exciting, taking them in is counterintuitive to the game’s speedy design. The game can’t seem to decide what it wants to be, and despite the clever ideas behind it, the whole experience simply falls flat as a result.

Bouncy Bullets 2 fails to deliver on its premise. The central mechanic is never fully utilised and the game is far too fleeting for anything to have any sort of lasting impact, despite the unique concept behind it.