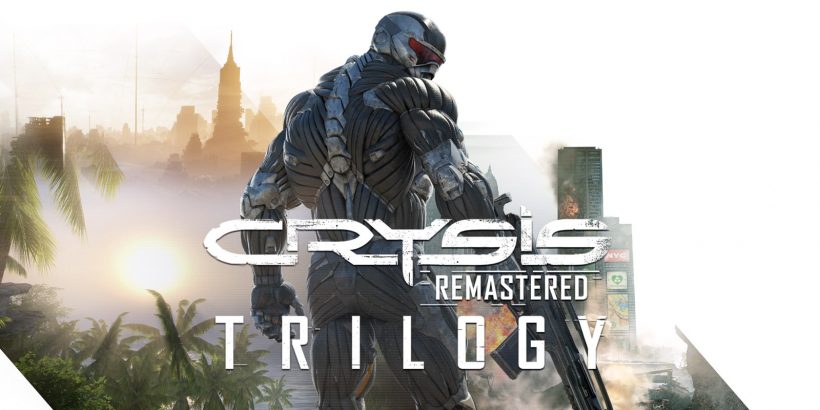 The Switch has an impressive library, but one area where it somewhat falls short is the first-person shooter genre.

Sure, we’ve seen great titles like DOOM on the system, and other games have tried to make an impact. Still, it’s not exactly anyone’s go-to console for FPS gameplay.

With that in mind, it’s interesting to see the Crysis trilogy make its way onto the console. Crysis Remastered, an enhanced version of the original game, was released on the Switch last year. Now, the whole trilogy is here, and Switch players can experience the full Crysis story from beginning to end.

But how does it hold up on Switch? Well, there are lots of ups and downs. On one hand, all three games manage to be solid additions to Switch’s FPS library. They’re not particularly outstanding, but all three are well-made shooters deserving of any FPS fan’s time. On Switch, though, performance issues come into play almost immediately.

The frames are locked at 30, the graphics are lacking in quality, and the controls are more difficult to get to grips with than other versions. All of these issues are alleviated on other consoles, and they hold this version back from being a game I can recommend. If performance problems don’t bother you it might still be worth a shot. If you have another console, it’ll be a much better experience on that instead.

The biggest issue comes in long-range encounters, where enemies become so hard to see it’s nearly unplayable. Enemies that are far away become indistinguishable blobs and hitting them is way harder than it should be. Some guns feel inaccurate and the recoil is too intense sometimes. When a lot of things are happening at once, the action becomes disorienting and blurry.

Close quarters combat is still fun but the low frame rate holds it back from being the high-octane shoot-em-up it clearly aims to be. Most of my time with Crysis 2 was spent running around punching enemies or blasting them with a shotgun. Faced with a wide open space, I avoided the sniper rifle the developers kindly laid out for me and tried to stealth my way through it instead. It’s nice that the game gives you these options – if it didn’t, this would have been a far worse experience on the Switch.

The choices you have in each encounter make Crysis a step above the average shooter. Whether it’s using your cloak to sneak through enemy lines or going in guns blazing, you’ll always have a number of options in your engagements. However, the AI can be troublesome at times. In Crysis 2, stealth was a bit more difficult as the AI seemingly spots you the second your cloak runs out. Crysis 3 is a nicer experience if that’s your preferred approach though. The AI seems less obnoxious and the levels are more stealth-oriented. The added bow weapon is also a great addition to the game.

One issue with the Crysis series is the enemy variety. It’s better than some FPS games where your only foe is the same mindless soldier copy-pasted a thousand times, but it still feels a bit bland. When the aliens are first introduced, it’s a cool moment. But soon they start to feel repetitive, and there aren’t enough variations to keep you surprised as you play.

The narrative told here is surprisingly enjoyable. Alien invasions and super soldiers aren’t original concepts at all, but Crysis does a good job with what it has. Crysis 2 in particular is very cinematic, and the score across the trilogy is phenomenal. The soundtrack is way better than it has any right to be, elevating cinematic moments to new heights. It’s a shame the graphics on Switch can’t quite keep up with the scale of the action on display here. Still, impactful moments manage to hit the mark regardless of the lower performance.

There’s a lot to get stuck into here as well. Crysis Remastered Trilogy has three decently-sized campaigns with an interconnected storyline, and it offers a lot of bang for your buck. There are hidden collectibles and story details to find, and even gyroscope controls if that’s your thing. It’s clear the developers put effort into the Switch version, even if the performance is lacking.

I hate to keep bringing it up, but it really does prevent this from being one of the best action experiences on the system. In an FPS game, it’s important that the action doesn’t constantly leave you feeling confused or frustrated. The difficulty in Crysis on Switch doesn’t come from the challenge of the level design or enemies, but rather your own inability to execute actions the way you’d be able to on a different system.

When the original Crysis was released on Switch, we gave it a rather unfavourable review. This trilogy is an improvement, though it’s tough to shake the feeling that the experience would be far better on another system. Gaming has changed a lot since the Crysis games first came out, but they still manage to hold up today as solid shooters. Just maybe consider buying them on another platform if you have the option.

The Crysis Remastered Trilogy is a solid set of shooters with a lot of fun action and an amazing soundtrack. On Switch, the performance unfortunately holds them back from reaching their full potential.