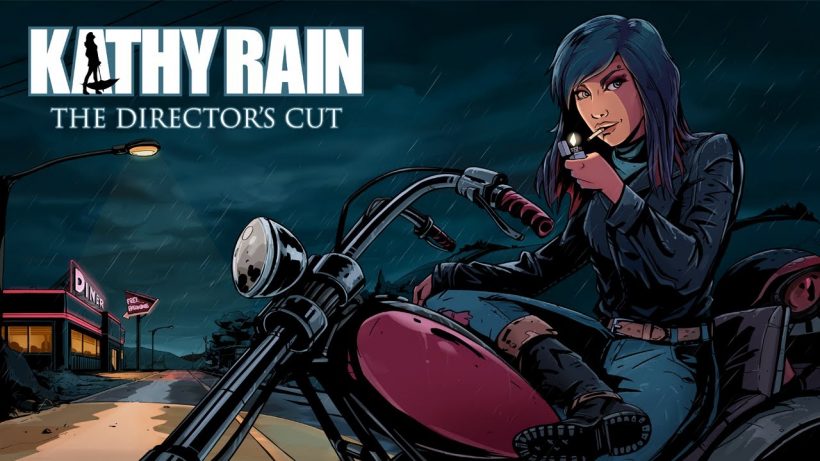 You generally know what to expect when you pick up a point-and-click adventure game. There’s going to be a mystery that kicks things off, rooms full of items to interact with and pick up, puzzles that will take more than a few attempts to solve, and a colourful cast of characters to speak with. Kathy Rain: Director’s Cut delivers on all of this, and even feels like one of the better point-and-click games you can play on the Switch.

Kathy Rain launched in 2016 for PC and it’s as great now as it was then. The Director’s Cut includes a few improvements such as extra character animations, new stories and locations, and even a remixed soundtrack. While you won’t notice these improvements without playing the original, it’s still good to know that the game could have been displayed at an awkward ratio but instead, you’re playing what equates to the definitive version.

The game feels right at home on the Nintendo Switch, even when played on the OLED Model. The colours are just as vibrant and engaging as any modern release, making it feel much more up-to-date than it really is. This is backed up by the gameplay, making for a timeless experience.

In Kathy Rain: Director’s Cut, you take on the role of Kathy, a young girl who has returned to her hometown so that she can investigate the mysterious circumstances surrounding her grandfather’s death. The story is interesting and gripping, taking you to several unique locations where you’ll interact with a fantastic cast of characters. If you know what you’re doing, you could smash through the whole thing in about eight hours, but I’d advise you to take your time and soak up the atmosphere. You never know where the story is going from one beat to the next. The end of every chapter throws your theories out the window.

Kathy is a superb protagonist that you can identify with from the word go. She’s sassy, rude, and sticks up for herself in every situation. Playing as her feels like a projection of your own motivations in the same situation. For example, under normal circumstances, you almost certainly wouldn’t hack into the computer system of a medical facility so that you can identify where a patient is, but Kathy would. Kathy doesn’t hesitate, and it makes progressing through each puzzle or conversation feel that much better because you know you’re onto the next step.

Most of the situations that Kathy ends up in feel a lot more realistic and tangible than other point-and-click adventures too. While suspending your disbelief for a few hours and imagining you’re trapped on an island with monkeys and pirates is great, this game offers a far more grounded experience that feels like it happened in the recent past. It’s a great blend, combining the nostalgia of Stranger Things and the absurdity of the X-Files.

There are so many elements in this game that are worth playing for individually, and having them all together only enhances the experience. The visuals pop, particularly on the Switch OLED Model. The classic retro visual style that suits the genre so well has been almost perfectly implemented here, though there are a few occasions where perspective makes Kathy look a bit funny, and a chair appears to sink into the butt of one, particularly large character.

The environments are always stunning, and the fast travel system has a lovely link with the rest of the story that sees weather consistently carried throughout. This system takes place in its own screen, with Kathy riding her motorcycle, for which you can unlock new skins. It’s a small touch, but it sets the game apart from other point-and-click titles because the mechanic has been incorporated into both the story and character.

This all goes without mentioning the audio, which is almost always fantastic. Every character and interaction is fully voiced, and outside of a few lines that feel as if they don’t match the tone of the situation, it’s all perfect. This ascends the game from standard point-and-click fare to an experience that you’ll remember long after you’ve finished it. However, the game isn’t without its flaws. The control scheme is a definite low point for the title. While understanding what items interact with each other is far easier to work out than other games in the genre, making those interactions happen can be a nightmare. The game offers no tutorial to settle you into the controls, so you’re left blinding pressing buttons until you stumble up which one selects an item, which one opens your inventory, and which one insults Kathy’s grandmother.

Kathy Rain: Director’s Cut doesn’t do anything massively important that you can use to pinpoint it as a phenomenal game. It’s the many little things that are present here that make this an excellent game, though, even if you’re not normally a fan of this genre. If you love the nostalgic aesthetic of any media set in the 90s and adore anything from that time period even more, you’ll have a fantastic time playing as Kathy.

Kathy Rain: Director’s Cut is a short but sweet point-and-click adventure game that provides attitude and challenge in equal measure, without either wearing on you so much that they become annoying.