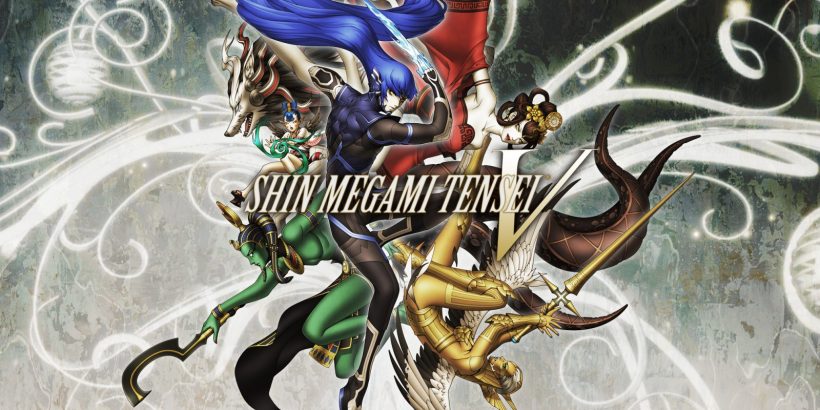 The Megami Tensei series has been around for many years now, and it’s one that is, unsurprisingly, incredibly popular in Japan. Shin Megami Tensei V was the first of the series I’ve played, not including its much-loved Persona spin-off, and so I was incredibly excited to get a taste of this expansive RPG.

Shin Megami Tensei V is set in the city of Tokyo and you play the role of an unnamed school student who finds themselves in a very unsafe and peculiar situation, caught in a battle between good and evil, angels and demons.

When your character is mistakenly teleported to what appears to be an alternate-and-destroyed version of Tokyo, known as Da’at,  you encounter some of those pesky demons. With no weapons (or experience) to defend yourself, it seems you’re a goner. That is, until an unknown being called Aogami appears and saves you by quite literally merging with your body, creating a Nahobino—an accursed being with the ability to battle or even befriend demons. This is where your journey begins. Gone is that innocent student, replaced with an extremely powerful being.

Shin Megami Tensei V features a turn-based battle system. You can choose between using physical attacks or coded magic to do some major damage. Similar to Pokémon, each enemy you come across has various weaknesses that you must learn and use to your advantage to succeed in battle. You will need to use a variety of attacks before an enemy’s fragilities are revealed to you, though. By hitting an enemy with an attack they are vulnerable to, you will gain an extra turn. Super handy. Be warned, though, turns can be taken away from you if your enemy hits you with a move you’re weakest to, so be careful.

During the game you are able to make deals with the devil, so to speak, as you can actually recruit demons to your team that will fight by your side. You must persuade them to do so first, though, which can be a bit of a challenge. Some demons will join you simply to avoid the confrontation of battle, others may need to bought out. It all depends on the demon. You can recruit a total of three demons to battle by your side, and you can switch them out at your will.

The ruined city of Da’at has four main sections for players to explore, each of which contain ruined relics relating back to Tokyo. You are free to explore these areas as you see fit, defeating enemies (or recruiting them) and finding secrets hidden around the area.

In addition, you will also come across some 200 Miiman which are the closest thing to collectibles the game has. Gathering these will lead to rewards in the shape of special gifts from the shop when you hit certain milestones, as well as some Glory — a currency used to purchase new skills for your character. So, there’s a lot of things to keep you busy while exploring the city.

Enemies will be spread out in the open for you to see and encounter as you please. We all know how annoying it can be to be thrown into a random battle every five steps, and it was nice to see that’s not an issue here. Although, you will find yourself wanting to enter these battles just to gain EXP from them because, trust me, you will need it. This game does have a steep difficultly spike, so you’ll need to prepare accordingly.

Not to forget, though, engaging in combat is completely optional in Shin Megami Tensei V because you can choose to engage in a conversation beforehand. These characters can, and will, be useful to you, in many ways — you just have to talk to them nicely! Who knows, you might even begin to like some of them…

‘Demon Fusion’ plays a big part in Shin Megami Tensei V and it’s an incredibly useful feature. This is where you can combine several of your existing demons to create an entirely new one. These can be extremely powerful demons that you won’t find elsewhere. You are also able to reverse a fusion if you make a mistake, like fusing a strong demon which you wanted to keep, for example. This is a great feature and also helps to provide a more stress-free approach to the gameplay.

Essences are also a huge part of the experience as you are able to transfer them from demons you collect to your Nahobino to alter their proficiencies and skills, giving you much greater control over the type of character you’re going to play. It’s a relief to not have to reset skill points just to alter your play style; again, there is no risk here.

I’m also glad to say that I encountered no problems, glitches, or bugs with my time in the game in both handheld and docked modes. It performs extremely well on the Nintendo Switch, which was great to see.

Shin Megami Tensei V is a huge game, exceeding well over 80 hours play time and, after spending a lot of time with this game, it’s clear to see why the series is loved by many. It really does tick all the boxes: intriguing story, interesting characters, in-depth but not complicated combat system, and a good-looking yet linear world to explore. What more could you ask for?

If you’re a fan of Megami Tensei or just a RPG fan in general, you can’t and won’t go wrong with Shin Megami Tensei V. It offers players so much without the ‘heavy’ feeling that usually comes with many RPGs.