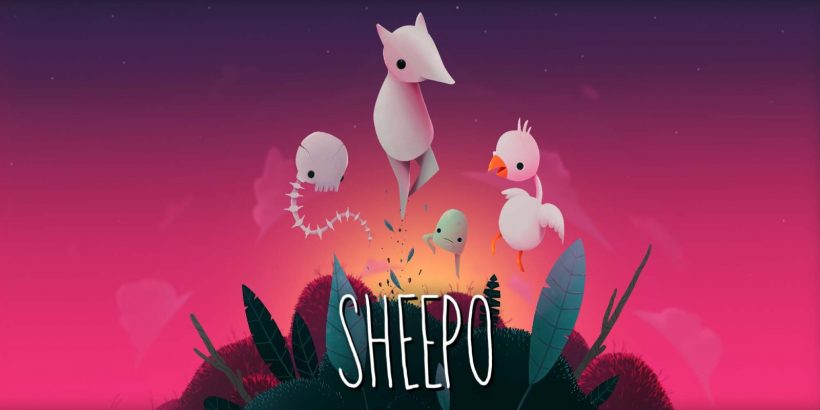 I came very close to liking Sheepo. An indie Metroidvania, created around the concept of no combat, really appealed to me. Sadly, Sheepo has better competitors, and it fails to really set itself apart.

Possibly timed as a consolation prize for anyone unable to splash out on Metroid Dread—or cope with its difficulty—Sheepo is everything Dread is not: friendly, easy, minimalist. It looks a bit like Evergate crossed with LIMBO, although it lacks the latter’s sense of looming terror. I found the style quite appealing, even though it wears a bit thin eventually.

Sheepo doesn’t so much “lack” combat as proudly wear its combat-free nature as a badge of honour. Your task is all about preservation of species, which helps set up a friendly plot line alongside the excuse to avoid combat.

There are still plenty of hazards, naturally; spikes, toxic water, and buzzsaws must be avoided. The game also compensates for the lack of combat with puzzles and minigames, and this works to some extent. Your character—a sort-of armless goat crossed with a Moomin—has a jump with a lot of momentum and not a lot of height, which makes some of the platforming quite tricky. Starting off with both wall-jump and double-jump helps a lot, though.

The first boss gives you the first real ability upgrade, and both set quite a high bar which, disappointingly, the game fails to reach again. An enormous bird-like creature chases you up alongside a tower you can scale, via a vertical series of minor platforming challenges. The bird spits some bad type of junk that you obviously have to avoid as you go. It’s really good fun, and a nice gentle first challenge that’s quite original.

And the power that boss grants you is even better: the ability to transform into a bird creature when you meet one. It’s basically Odyssey in 2D. These birds are strategically dotted around the landscape, positioned where flight will help you traverse dangerous flooring or near a hidden goodie that’s otherwise unreachable. This power adds a pleasing sense of freedom to the game.

But the bosses, and powers, that follow are just a bit ‘meh’ in comparison. Bosses are single-screen and often just require you to avoid them for a set period of time. The remaining powers are all very tied to the locations of their hosts and don’t feel especially fun to use. The lasting impression is of a game that starts off hitting all the right notes but fails to really maintain interest.

Sheepo’s landscapes are a bit barren and a bit uninteresting. Its areas have different background and offset colours, but the dominant colour is always the foreground black of the platforms, obstacles, and so on. Apart from standout area, the Gallery, these zones tend to merge into one and I found myself resorting to map lookup very often, considering the size of the game.

The removal of combat should set up some interesting constraints for the game’s design to work around, but those constraints are maybe just insurmountable. In a typical Metroidvania, combat provides a reason to upgrade, and it livens up backtracking by giving you something to do when retracing your steps. It turns out slaying enemies with progressively less effort is a lot more fun to relive than sections of precise platforming.

Sheepo is a weird contradiction. It feels as if it packs quite a lot into its small frame, yet too much of it feels barren. The no-combat approach adds some much-needed originality, but the design needs more refinement to make up for what combat usually offers.

On first impressions, Sheepo is a welcoming, inventive Metroidvania with slick aesthetics. But its stark environments and lack of combat result in a rather empty world which does little to establish the game in a sea of able competitors.