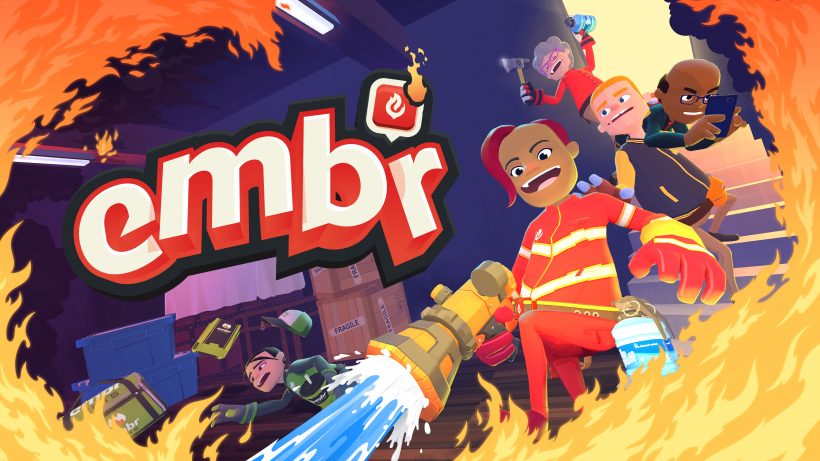 From Uber, to Just Eat, to Airbnb, there seems to be an app for just about everything these days. But what if you were to take this formula and apply it to the heroic act of firefighting? With their tongues firmly placed in their cheeks, Muse Games and publisher Curve Games (rebranded from Curve Digital as of October) have answered this definitely often-asked question in Embr. Unfortunately, whilst humorous presentation and a quirky premise offer some chaotic multiplayer fun with friends, the gameplay is often frustrating, with performance issues and multiplayer hiccups that could leave players feeling burned by the Switch edition.

Embr imagines the life of a firefighter through the self-employed ‘gig economy’ lens, taking clear inspiration from apps like Uber in its fictional in-game marketing, but with an air of sarcasm and disdain. The game establishes its humour as early as the Switch menu, both with a Tinder-esque parody icon and vowel-omitting name, and a clever app-based UI.

As a firefighter-for-hire signing up to provide your services through the Embr app, the premise is simple: Answering the call of the app’s rather desperate customers, you’ll hose your way through 25 varying levels, each with its own structures and hazards that you’ll need to navigate in order to get residents to safety. Puzzles and platforming challenges ensue as you dodge and restrain the flames – set on a timer before the entire building in question collapses – and you’ll get a rating with payment based on how successful you are in completing each objective.

Aside from simply rescuing your, well, customers, I suppose, you’ll also be given additional bonuses for safely recovering expensive items, or even delivering meals on wheels through the ‘Embr Eats’ app — serving fire from the kitchen to those wishing to evade fire from their kitchen. You can also decide to place money outside of the designated rescue zone and somewhere more ‘private’ (i.e. the boot of your own car) in order to earn a bigger cut to buy upgrades, but it’s better if no one sees you doing this.

As a hero for hire, you don’t need to worry about pesky regulations or standard-issue gear, and can instead choose to employ a variety of different items and tactics to help get the job done. These range from simple, expected procedures with axes, extinguishers, and ladders, to more experimental methods of evacuation involving trampolines and bouncy slides. Assigned a job in a particular location that contains more electrical hazards? Opt for an extinguisher that uses a safer foam rather than water. Need to reach a higher floor to recover precious valuables that you are most definitely going to return? Use a ladder, grappling hook, or even an experimental ‘jet hose’ to get into those hard to reach spaces.

This variety of options available for problem-solving makes for a bunch of sandbox fun, and when teaming up with friends you can mix and match items to create a tight-knit fire fighting squad. You even have multiple loadout spaces available before diving into each mission, allowing you to build a setup for different scenarios as you hone your craft with the aim of reaching that five-star Embr rating.

Combined with the bright, Overcooked-like visual style, Embr’s presentation and vibe are well crafted. It’s a shame, then, that unlike Going Under, a title that similarly takes an ironic influence from marketing apps and services, Embr‘s performance and gameplay isn’t as sleek or smooth as the on-the-surface premise. It’s to be expected at this point that a first-person, action co-op puzzle shooter may have trouble running on Switch hardware as well as it might on other platforms, but the game is all-too-often just unsatisfying to play.

As a firefighting game, you’d expect one mechanic done well would be the act of actually spraying and putting out fires, but the hose you initially start with is terrible. Blasting patches of flames with your hose on full blast will dampen a fire only momentarily, and while the objective is to escape rather than to extinguish hazards entirely, you often resort to flailing around in a panic when your tools are ineffective, tossing strategy out of the window along with the customers you’re trying to save.

The various hazards and obstacles you have to overcome when rescuing people from the buildings are also a little inconsistent. At points, I’d find my health bar nosediving when running through a few stray flames in order to reach escape, while in other moments I felt like I could soak up electric shocks and fires in order to just run out to safety.

Overall, Embr offers a zany, entertaining co-op experience that is better with friends – if you can find them out there in the isolated online lobbies. It’s a phrase that you’ve will have heard a hundred times at this point, but with the promise of better performance and also the addition of cross-platform play, you’re better picking this one up on a different console if you have the luxury.

Embr delivers on its promise of frantic firefighting chaos. However, with performance issues and multiplayer snags raining down on the Switch version, it’s a weaker experience compared to the crossplay-enabled counterparts.