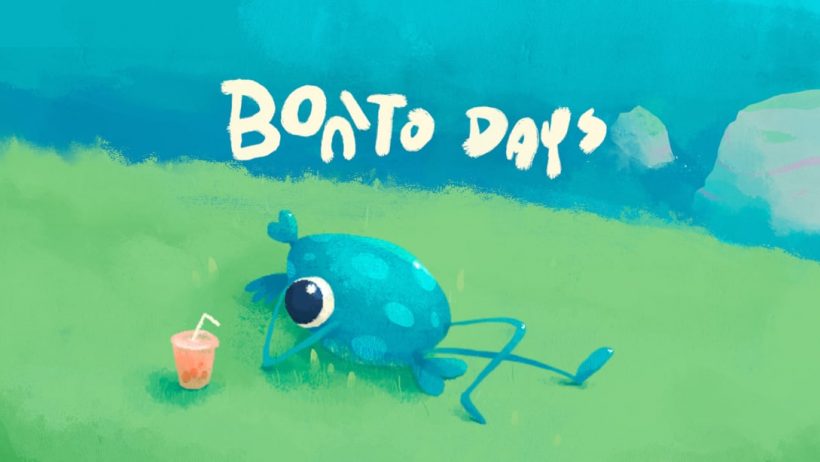 Above da sea! Above da sea! Fishies like me, with arms and leggies, we love da glidin’! Roll me up in a little ball, launch me off something high and tall! Bonito Days!

This alternate rendition of the song Under the Sea from Disney’s The Little Mermaid tells the story of a little video game titled Bonito Days. From developer/publisher Studio Somewhere, our controllers guide the actions of a colourful bonito fish; this particular fish is a bit unique, as it’s equipped with arms and legs! Appendages without feathers may not sound ideal for a life of gliding, but somehow this fishy makes it work.

The game flops you right into the action. You can “play” through the tutorial first, but it is just a bit of text to read that says most actions are done by pushing A: press A to start rolling, press A to launch yourself, press A again to land. This, combined with some handy dandy steering using the right Joy-Con, will have you gliding in no time.

What the tutorial doesn’t tell you is that the left Joy-Con is of absolutely no use, and it also fails to mention that the camera is controlled with the LT and RT buttons. This is a recipe for some pretty frustrating gameplay. Once you discover LT and RT, however, it does not get better.

The camera feels like you are trying to properly aim a bowling ball on a chain by spinning it around your head. It’s clunky, slow to start, and then if you hold the trigger buttons for too long it speeds up, causing constant over or under-shooting of the desired viewpoint. It feels like I’m always fighting, rather than playing, with the camera, resulting in useless neck-craning to try and see what’s around the virtual corners.

Single-player gameplay in Bonito Days is somewhat lacklustre. There are five different areas to glide through, but they blow by so quickly that the chill, relaxing vibe the game is aiming for is ruined because there are only about 45 seconds after launch before fishy runs out of gliding steam. The game is unforgiving, and any failed attempts still count as attempts: after three, it simply moves on to the next level. An actual tutorial level, rather than a tutorial wall-of-text, could have made a big difference in this regard.

Multiplayer is where the majority of the enjoyment in Bonito Days can be found. Getting a few friends together to compete at who can best glide a fish within a set time limit provides that silly party game vibe. The game doesn’t support online play, however, so local multiplayer is the only option.

Artistically is where Bonito Days really shines. The artwork is a deluge of soft pastel colours and interesting landscapes to launch off of and glide around. Should you successfully land your bonito, it will do a silly little wiggle dance that will bring a smile to your face. This fish may not have rhythm, but it sure has enthusiasm!

The soundtrack is also amazing. It gives off serious Katamari Damacy vibes, and each song is catchy and fun. You may find yourself jumping into a gliding session, despite the wonky camera, just to listen to the music.

The gliding is the best part of the game, so it’s a shame that your time spent in the air is so short-lived. The vibe and music tell you to take it slow, but then the harsh reality of the gliding timer screams in the middle of your screen that this isn’t an option.

There is a fun gem of an idea inside of Bonito Days, and neat multiplayer enjoyment to be had. However, gameplay that’s at odds with the presentation and aesthetic hold it back from being something truly great.

Bonito Days is a fantastic soundtrack with amazing artwork, wrapped up in a pretty okay game. If you’re looking for a chill-vibe party game to play with your housemates, the local multiplayer is an enjoyable and worthy experience.