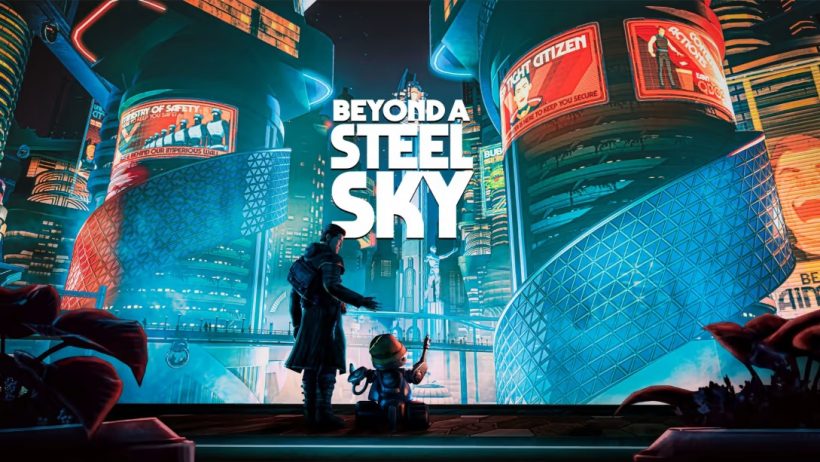 It was supposed to be a simple job: get the kid, get out of the city, then return him home. Little did Robert Foster know, however, that by venturing out of The Gap and returning to the commanding heights of Union City—now an outwardly extravagant Utopia full of opportunity—that he’d soon get swept up in a much deeper mystery. That word, “mystery”, is important for old-school adventure games of this ilk, and it’s one of the main ways Beyond a Steel Sky pays respect to the point-and-click stylings of its predecessor, while modernising most other aspects. True, the perspective may have changed and visuals updated, but this is still very much a classic, puzzle-solving adventure with a good story, now available to enjoy on Nintendo Switch.

One of the most striking things about Beyond a Steel Sky is just how fully formed its location is. Does it present you with a vast open world to explore, brimming with sectioned-off hubs and several side stories? Not really. It says a lot, though, that Revolution Software has made Union City (and its surrounding areas) feel like a real place, one that you’re guided through linearly but still given several opportunities to dig deeper into. In many ways, it shouldn’t be surprising at all. At almost every turn you’re reminded that Foster has been to this place before; that legacy of the original Beneath a Steel Sky serving as a constant reminder of how Union City used to look and feel prior to an AI takeover.

That said, no pre-existing knowledge of 1994’s game is required to enjoy Beyond a Steel Sky to its fullest. As Foster, you must visit the various pre-determined areas that make up Union City in the hopes of finding Milo, all while unravelling a potentially more sinister plot. This means a lot of your time is spent engaging in conversations with characters, using the correct item from your inventory to solve puzzles, and employing your hacking device to make the technology around you suit the current situation.

Many adventure games fall down by making their puzzles and conundrums too obscure. After all, it’s extremely hard to have fun or feel as smart as the game needs you to be when you’ve seemingly tried every avenue using the tools around you. Beyond a Steel Sky never suffers that problem, however, mainly due to a built-in hint system that can be accessed from the menu at any time. Picture the scene: you’re trying to get from one area of a museum to the other (as the plot demands) but you can’t work out how to do so. If it gets too much just access a hint, of which many are available. Such a mechanic prevents your progress from ever coming to a complete standstill, and was a touch I came to use and appreciate more than once.

If you’ve exhausted all dialogue options and every interactable object and still aren’t getting anywhere, nine times out of ten the hacker tool will hold the solution. It essentially acts as your way to swap chips between different robot types, changing their function in the process. One scenario, for instance, requires you to change the posture of a bionic arm in order to call someone over. There’s no other way to do it discreetly than to switch its function with a nearby vacuum bot. Works like a charm! The hacker tool is perhaps relied upon a bit too much as a problem-solving crutch, if I’m being honest, but it doesn’t negate the need for you to work out the puzzle yourself first.

So it’s so far, so standard in terms of the gameplay. Luckily, Union City itself manages to keep you engaged as it continually opens up to you. Beyond a Steel Sky owes a great debt to the likes of Blade Runner and William Gibson’s Neuromancer in that it’s a built-up cyberpunk metropolis full of AI-influenced people and structures, yet the writing and art style (headed up by Watchmen’s Dave Gibbons) are both charming enough that you forgive a lot of this familiarity. The whole cell-shaded presentation mimics the idea that you’re flicking through a comic book nicely, even if the resolution and frame rate are a significant step down compared to other consoles.

From a pure story perspective, Beyond a Steel Sky sets you on a journey just as interesting and worthwhile as its mystery-driven destination. And it does all this whilst only clocking in at around 8-10 hours. In that short time, though, your visit to this idealised version of Union City is fulfilling, no doubt helped by memorable characters like Robert Foster’s robot buddy Joey. Will you miss certain references if you haven’t played the original? Yes. That shouldn’t dissuade you from taking this return trip, however, especially for Switch players in the mood for a classic-style adventure game with 21st century sensibilities.

Beyond a Steel Sky keeps its roots firmly in the past, but it’s accessible enough to avoid dissuading a modern audience. Some puzzles are basic, and this is far from the best-looking version, yet this is still a creative sci-fi adventure with solid writing and great world building.

Those craving a slightly more mainstream take on the classic point-and-click adventure games of old will have a good time with Beyond a Steel Sky. It doesn’t outright amaze, but is no doubt a solid piece of sci-fi made playable.