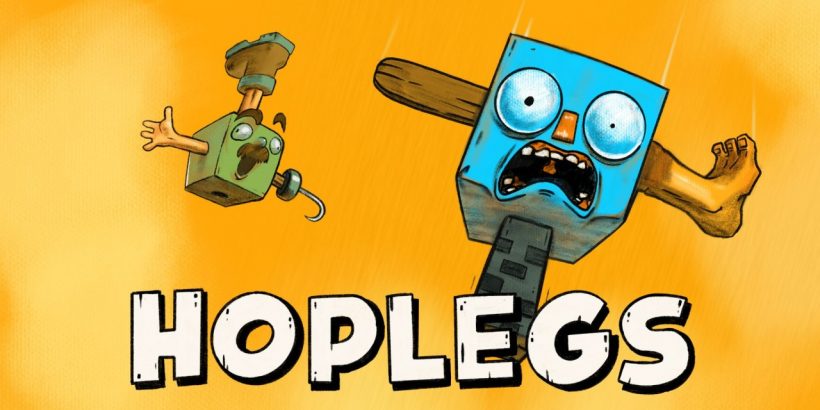 Frustration when playing a game is common. Many games are built to challenge us, push us to think of bold and creative ways to solve puzzles and conquer obstacles. Even the most relaxing games contain elements requiring you to pause and mull over, even if only for a moment, so it’s clearly something that is ingrained throughout the medium. Challenge is what helps us grow as players—heck, as people. Overcoming a challenge is fulfilling. It’s rewarding. In the case of Hoplegs, though, it just really isn’t worth it.

Hoplegs isn’t exactly a complex game. You play as a wizard who, through some hocus pocus hijinkery, has managed to turn himself into a box. Thus ensues a grand prophecy-defying adventure, where you assume control of said box and his four legs as you try to save the kingdom. That’s right, each of the gamepad buttons maps to a corresponding leg on each side of the box. Your goal: to traverse a series of increasingly challenging levels using this admittedly unique control scheme.

I don’t necessarily take issue with the idea behind the controls that Hoplegs employs, as it’s a truly unique and interesting idea that makes the game stand out. The moment you finally pull off a tricky manoeuvre can certainly lead to that sense of fulfilment mentioned earlier, but these moments are few and far between and much too fleeting to make a real impact.

It’s hard to feel as though you ever master Hoplegs’ controls. The moment you think you’re making progress, one seemingly minute detail will set you back. Your character’s movements are incredibly sensitive and gaining the level of precision required for certain jumps comes at the cost of time and sanity. Certain options in the game allow you to manipulate such things as jump height, but even these allowances don’t improve the experience all that much.

This isn’t to say the game shouldn’t be challenging, but that challenge has to mean something. When you defeat a boss in Dark Souls, for example, it’s all a matter of studying its movements and the timing of its attacks, and choosing that precise moment to strike. Through that study, you’ve made an informed decision and emerged successful, and Hoplegs should generate this same sense of progress. But, even though you’ll find yourself at certain points where you’ll know exactly what to do from previous experience, the controls are so haphazard that even executing the correct strategy can end in failure, over and over again.

Part of the seemingly airy nature of Hoplegs’ control scheme may come from the general tone of the game itself. The opening cutscene immediately strikes a note of comedy that carries on throughout the game, and the writing here is genuinely good. The very premise of the game is an absurd one, so leaning into it is a stellar idea. In fact, as you journey through each level, the toll of life as a box clearly makes itself known, your character making all manner of pained facial expressions as you fling him through danger. Unfortunately, the grin-inducing narrative isn’t enough to make up for the shortcomings of the actual gameplay.

Hoplegs is a challenging game, but that challenge feels more as a result of dysfunctional controls than tight gameplay mechanics and precise level design. For those willing to put in the time, there may be a fun experience to be had here through speedrunning and community features. But attaining the level of expertise required for these is not an enjoyable experience and is forever at the mercy of a control scheme that doesn’t quite hit the mark.

Hoplegs is a frustrating and challenging game whose control scheme, whilst unique and full of potential, is far too chaotic to gain any enjoyment from. Sadly, this holds back an otherwise intriguing title.