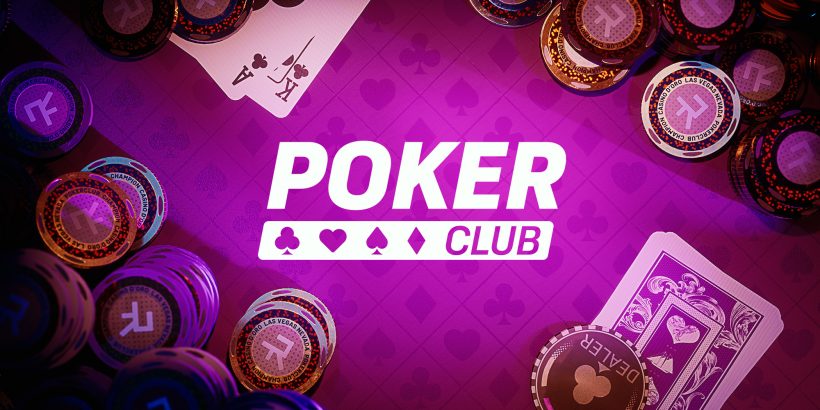 Becoming a poker pro is something that I’ve never aspired to; I crumble under the pressure and I don’t have a very good poker face. But I do love the thrill of the game. So Poker Club seemed to be the perfect way for me to become an ace player. Just how pro is this game though?

Poker Club is an immersive simulation game in which you play the very well-known card game, poker, to become a pro card sharp. Whether you’re a seasoned veteran, or new to the game completely, Poker Club is for everybody to enjoy.

In Poker Club there are many ways to play, despite the core game being such a simple premise. To start off with there is the PCC Campaign. You will work your way up from the bottom of the ranks, from the basement of Ralph’s Pizzaria to a huge arena with massive multi-player tournaments involving 228 competitors. This is a lot of fun, even if the prospect is slightly terrifying. I must say, though, there is no better feeling than beating real online opponents.

On top of that, there are also ten (yes, ten!) Texas Hold ’em modes that range from one-on-one games to bounties and ring games. You can also join online clubs that will easily allow you to link up with players and earn the right to enter exclusive events. If you want to play with a group of friends too, you can do so simply by creating your own custom game. Whatever you say goes here, they play by your rules.

The one aspect of Poker Club that I liked the most is the implementation of actual online tournaments which you have to sign up for. There are a range of these each day that you will need to buy into and be ready at specific times in order to play, which I found really enjoyable. It prompted me to keep checking back each day to join a tournament at a convenient time. However, be prepared: this is where the real pro players will gravitate. But you can get some good rewards for winning.

Now, you might be thinking “But I’ve never played Poker in my life!”, and that’s fine. Poker Club does come armed with a pretty extensive tutorial that will allow you to get to grips with the rules. You’re not going to pick it up immediately though so, instead, just learn by doing! It does also help that the game will automatically tell you what you have (high card, pair, three of a kind) whatever it may be, so you’re not completely playing blind.

Poker Club also allows you to—very briefly—create your character. Choose from a small range of options of hairstyle and you’re ready to go. Not only that, but you are able to purchase various character and table customizations to show off your wins. Want a cool new hat? Sure! What about some shades? We can make that happen! It’s all possible… for the right price.

The one thing I did happen to notice straight away in-game was that the graphics in handheld mode really aren’t the best. Everything aside from the cards in your hand looks really blurred to the point where I felt I couldn’t play this without my glasses on. This was not a problem in docked mode, though. For someone who mainly plays their Switch handheld, this was a real let-down.

I encountered no problems when joining online games, I’m very pleased to say. I expected there to be some errors or trouble finding matches, but that didn’t seem to be the case. I would consistently join games with full tables and I didn’t experience any lag or glitches between matches.

Poker Club is a fun and lightweight pick-up-and-play game that requires as much effort as you’re willing to put into it.

Overall, Poker Club is an enjoyable game that, for such a small price, holds hundreds of hours of gameplay. If you’re a poker fan then this is definitely for you.