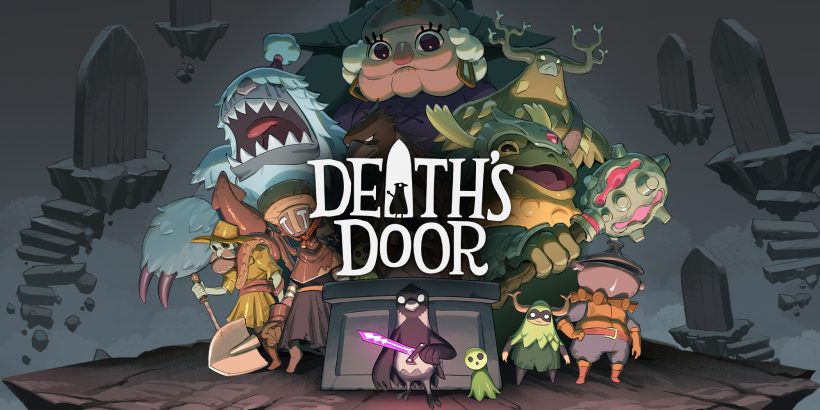 Crows get a bad rap. Despite being highly intelligent and playful, their popular image is a bit sinister, associated with bad luck and even death. They’re complex creatures, really, but as an emblem of transformation and destiny, they’re a perfect choice for the soul gatherers involved in this game.

Death’s Door is an isometric action-adventure, with an emphasis on combat. Although it doesn’t really look like anything in the Zelda universe, it evokes just the same kind of experience as a Link adventure. There’s plenty of puzzling, exploration, and the lightest of RPG mechanics. Above all, it’s the dungeon combat and platforming that brings back wonderful memories of A Link to the Past and its kin.

Beginning in a monochrome, isolated hub, you’ll learn the basic controls before quickly entering a connected overworld, thankfully bathed in colour. It’s at this point that you can really start absorbing everything the game has to offer: the gorgeous visuals, sublime orchestral soundtrack, and the basics of navigation and combat. It’s not long, however, before you face your first challenge. In context, it feels as if the game has thrown its first boss at you unnaturally early, but by the end of the game, with hindsight, you’ll realise the Demonic Forest Spirit is merely a gentle introduction.

The fight does, however, give the game an excuse to show off, with some stunning presentation setting the scene for everything that’s to come. The text used for each boss’s title screen, and the accompanying musical effect, lend a cinematic quality to these fights. And it’s a similar story when it comes to the game’s death screen, something you’ll be seeing early and often. That death screen is one of the nicest I’ve seen in an indie since Ape Out; it’s almost a pleasure getting killed!

Death’s Door is nothing if not ambitious. With several large environments connected to the hub world, and dungeons hosting some dastardly bosses, the game has plenty of optional nooks and crannies tucked into its isometric corridors. Puzzles add a cognitive element, but they’ll never stretch you so much that they become the focus. Balance and nuance are the order of the day.

Alongside health, you have a magic meter which indicates how many shots you can dispatch from your secondary weapon, supplementing your starting sword. Every hit with your main weapon on enemies—and selected objects strategically placed around the landscape—restores a magic point. You can also plant special seeds you’ll occasionally discover, then return to them later for health restoration. So, although there’s no shortage of undesirables lurking around every corner, you’ll have plenty of ways to mitigate the danger.

Your sword can be switched out for a range of substitutes, including knives, an axe, and so on. Many of these are hidden—I finished the game having collected four of five, but rarely made use of those beyond the sword and daggers. You might also feel like some of the game’s upgrades are too tucked away. Although there’s a health upgrade each time you collect four crystal shards, I only managed this once, quite near the end of the game.

Death’s Door makes the most of its perspective, which is zoomed out quite a way from the main action. It certainly differentiates itself from a slew of top-down Zelda clones released on Switch. Modern isometric games are much more playable now we have analogue sticks that map to the skewed view, far better than a D-pad does. The game occasionally nods at the nature of its fixed camera, rotating the viewpoint when you discover a secret around an out-of-view corner. It’s a functional necessity, but the reveal is a lovely little reward in its own right.

Although the view is fixed, Death’s Door isn’t afraid to make the most of all three dimensions. Its world is pleasingly vertical, especially on the build up to the crescendo. It frequently presents tantalising pathways on a higher plane, and navigating its catacombs and corridors often requires a combination of backtracking, key gathering, and lateral thinking. Many pathways are closed until you’ve gained certain upgrades.

You’ve got to take a minute to check out the soundtrack if you can—it’s available on Spotify and YouTube—although you won’t gain a full appreciation until you play the game, of course. Composer David Fenn, who also produced the music for Moonlighter, has done an outstanding job. The soaring themes repeat, but not in a way that you’ll get bored with them. The music synchronises with the action to magnificent effect, especially during boss battles.

The end result is something highly evocative of Link’s classic 2D adventures. It’s most likely a result of the dungeon-crawling action and the four main abilities you’ll pick up along the way: bow & arrow, bombs, fireball, and—yes—a hookshot! These ranged tools demonstrate one small element of the game that helps elevate it from merely great to outstanding. When lining up shots, there’s just the right amount of auto-aim: not too much, not too little. You’ll feel like a real badass taking down enemies from a distance, or nailing that tricky hookshot manoeuvre with ease.

The difficulty curve here, for me, was pitch perfect. Standard enemies litter the landscape, providing a variety of challenges which will task you with perfecting not just one style of combat, but several. As you upgrade your abilities and weaponry, you’ll discover that different approaches really do pay off. Rarely do I find myself using such a range of mechanics as I did here. Melee combat, ranged, and just plain avoidance can all lead to success in different circumstances, although you’ll find that trying to outrun your opponents is usually a bad idea.

The quality of combat can be best expressed via one single element: dodging. Your dodge—actually, a roll, but fulfilling the same purpose—is absolutely vital if you’re to make much progress. Close combat is utterly appropriate for the weaker foes, but many of the game’s trickier bosses have such a long reach, you’ll need to marry precision timing with split-second decision-making to defeat them. Death’s Door is an incredibly tactical experience. You can’t just rush into battles and tank your way out of danger, however tempting that might be. Patience is rewarded, but it also makes defeat to a boss all the more frustrating when you’ve spent several minutes, studiously avoiding their different attack modes.

And there certainly is a range of bosses. Some are presented in the overworld, as incidental: tackle them if you want, but you may prefer to return once you’ve levelled up and are prepared for the task. These bosses are fast, unpredictable, and hit very hard. In fact, your relatively low health—just four hit points initially—makes most encounters pretty nerve-wracking. Although there are checkpoints, and there’s no permanent penalty for dying, you’ll often restart quite a distance from the last point of action, so preserving that precious health takes on significant importance. The labyrinthine layout makes self-preservation even more vital, but overall this penalty is well-balanced.

Other bosses lie in wait for you, behind well-hidden doors, at the culmination of dungeons and, most spectacularly of all, at the very end of the game. The finale of Death’s Door is an unforgettable experience, one that wraps up everything you’ve dealt with up until that point and throws it at you all at once. The settings for these final battles are both stunning and familiar, but they’re pitched at a perfect pace and are truly rewarding in their own right.

It’s not as if there aren’t any flaws, though. The lack of a map rarely causes any issues, but returning to the game after a break can be tricky. The gameplay is linear but, at times, involves returning to a previous location to continue. If you don’t have the layout in short term memory or, worse, don’t quite realise where the game wants you to go next, you could be in for a protracted interval of wandering.

It’s also not the deepest of adventures that die-hard fans may be looking for. While the NPCs are engaging, original, and well-written, there isn’t a great deal of direct involvement from them. I would’ve liked to see more side-quests and additional uses for other characters beyond hints and setting up boss battles.

Minor faults aside, Death’s Door is a finely-balanced gem. It’s one of the most accomplished indies released this year, and anyone with a passing interest in combat-heavy adventures is bound to find plenty of enjoyment here.

Death’s Door feeds a nostalgia for Zelda-like adventures while sprucing up nearly every aspect. Graphics, sound, and—not least—combat mechanics are polished to near perfection. Despite some very minor flaws, the final experience is an extremely rewarding challenge.