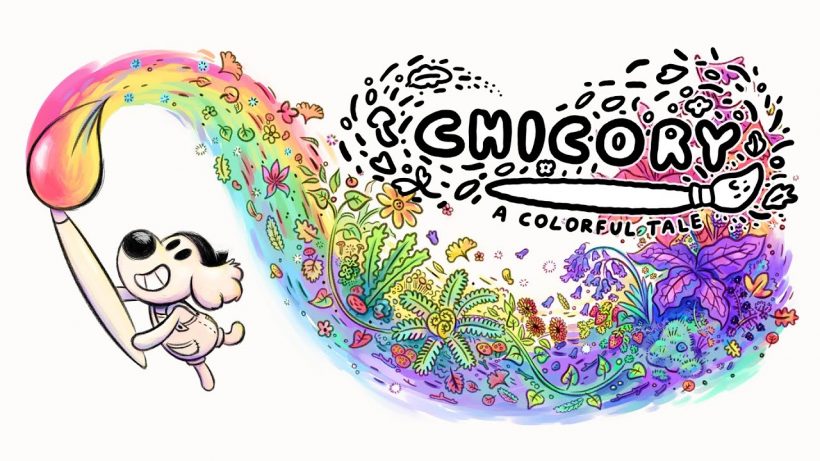 Chicory: A Colorful Tale is one of those games that doesn’t release to huge fanfare, yet it seems to resonate with anyone that plays it. There are many themes in the game that will hit close to home for pretty much anyone, but it’s the way the game wraps those themes up and has you interact meaningfully with them – without forcing you to do anything you don’t want to – that keeps you coming back for more until the final moments.

The game’s story follows a magical brush that fills the otherwise black and white world with colour and its wielder. This character is you, the wielder’s janitor, until you pick the brush up one day. You’re immediately besotted with this character because you name them after your favourite food, and from there you head out into the world to push back against a crisis that has not only removed all of its colour, but is a danger to anyone that comes near it.

Throughout the story you’ll encounter themes that affect everyone. That dread of someone looking at your work and judging it, the thought that you’re doing something wrong no matter your actions, and the simple fact that you just don’t feel good enough. These feelings run deeper the more creative you are, and the story hits harder for it.

At the heart of the story is a look at mental health, how we treat it, and the broad spectrum of reactions the world gives you. It’s an important story that never shies away from the subject matter, but it will hold your hand all the way through it.

I could not put Chicory: A Colorful Tale down. The gameplay resembles that of a The Legend of Zelda title, giving you a single brush and set of colours to start with, adding more brush styles, colours, and associated powers as you progress. The world lends itself to that progression, too. You can explore anywhere you can see, but you’ll need to unlock new brush styles or abilities to get into certain locations. Furthermore, you’ll have to solve puzzles in other areas to understand how to progress everywhere else in the world.

There’s almost no combat in this game, and I’d argue that what combat there is doesn’t count. This game is more about getting through the path in front of you, and once you figure it out, you’re free to move on. There are side areas and boxes to open for new clothes that you can go after, but the main story doesn’t require it of you.

Instead, you need to watch the world and learn how your interaction with it can help you move forward. For example, some trees disappear when you paint them, others grow. Similarly, you can’t explore caves until you unlock glowing paint, and then those caves present a glut of new mechanics for you to discover and master.

Each new step you make in understanding the game gives you something else to get your head around, creating a satisfying gameplay loop that feeds into your deep hunger to progress and do more.

You control your character using the left stick and move your brush cursor around with the right one. However, you can instead use any finger you like to paint the touchscreen of your Switch and interact with the world as much as possible. This is definitely the best way to play the game. In fact, one of the only criticisms I have about this title is that it feels slow and awkward to control the brush with the joystick at all, but I understand the necessity of that functionality for those who want it.

You can paint absolutely anything in the world, and that plays into the smaller side stories you’ll encounter as well. For some, you’ll need to paint a path for a character to follow out of a spooky cave. For others, you’ll need to paint and design a shape or copy a piece of art. No matter how poor your skills, really truly awful painting skills that not even a mother could love, the characters in the game won’t judge you.

This helps you feel confident in what you paint but also plays into one of the game’s core themes. If everyone thinks your work is brilliant just because you’ve been deemed worthy of using a magical brush, how good are you? Do people love your work, or the brush and its power?

The smaller side stories had me laughing out loud at the dialogue and more than a few insinuations. The writing is hilarious without needing to come out and shove something funny in your face. Rarely have I encountered better dialogue in 25 years of playing games.

Play it for You

Chicory: A Colorful Tale doesn’t need to be a deep title you play to realise something about yourself. It’s a fun adventure and that’s all it needs to be. However, for those looking for both a new Zelda-like with a unique twist on the genre and a game that can keep them busy with hours of side content on top of an engrossing story, this is all you need. True joy is often found in the little things, like a crisp morning or a bird singing in a tree nearby. This game is all of those things wrapped up into a lovely little bundle that you can take with you wherever you go.

Chicory: A Colorful Tale is an engrossing adventure that you won’t put down. The main story is enough to pull you in, but it’s the world that you’ll crave more of in the moments you’re unable to play, which is why it’s a good thing this game is finally on Switch.