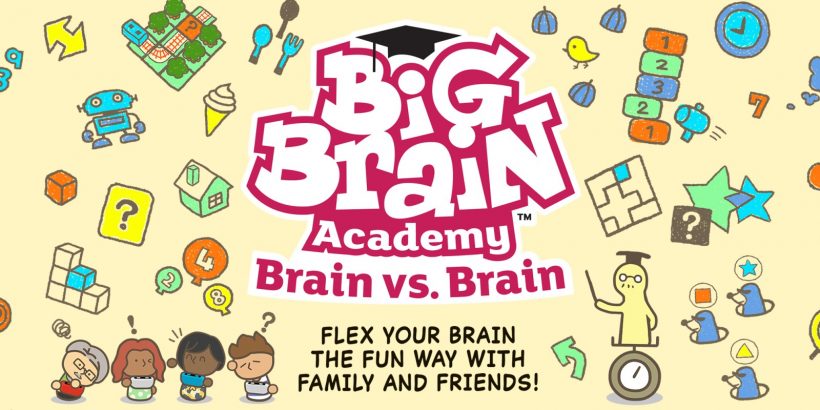 The first Big Brain Academy entry in nearly fifteen years, Brain vs. Brain graduates onto Nintendo Switch as the third in the series, this time going a different route with a focus on competitive, battle of the wits-style gameplay. With fun solo practice modes, competitive online clashes, and a local multiplayer component that uses Switch hardware in the creative ways we’ve come to expect from a first-party Nintendo release, it provides everything you need to get your brain shifted into gear going into 2022. New year, new me? New year, new game.

For the uninitiated, or those enrolling in the academy for the first time, the Big Brain games consist of a series of fun, quirky puzzle challenges, so get those thinking caps at the ready. With vibrant colours and charm, it’s an accessible alternative to Brain Training that leans more into the whimsy of an Animal Crossing title in its presentation than the average edutainment title. That’s not to say that Mr Kawashima isn’t good for a laugh every now and again, but if he’s your supportive parent, then Big Brain is the fun uncle.

Split across five core categories, each representing and working out a different part of the brain, minigames are all simple and easy to get to grips with, showing a little instructional splash screen before you jump in, similar to the Mario Party minigames. Those who have played previous entries in the series might recognise some returning challenges, but there are also some brand new ones to test your mental dexterity. With twenty in total, there’s enough variety to test all areas of your think tank, and each is brief enough to keep the gameplay fresh and exciting.

Practice modes are a great place to start, allowing you to get to grips with the demands of the different game types. You can also take a test that will sample a challenge from each of the five groups to give you a balanced overall score. From there, you can figure out where your strong suits are, and which areas you need to focus on in order to be the brainiest know-it-all on your friends list. And in Brain vs. Brain, the friendly competition for bragging rights will be the draw that keeps you coming back.

I suppose I shouldn’t have expected any less from a first-party Nintendo title, but the level of polish in Big Brain is astounding. The sounds that different buttons make, for instance, are so satisfying and well done that they almost feel tactile on the flat panelled touchscreen. The attention to detail — right down to the little things like showing you the controller configuration and Joy-Con colours your opponent is using — tie the experience up in a way that only Nintendo can do.

Character customisation is a welcome feature in Brain vs. Brain, with pretty much every task you complete earning coins that are then exchanged for clothing to dress your little avatar in. It’s another lovely touch that makes clashes with friends that bit more personal, particularly when you add in the catchphrases that you unlock as you go. “I am merely my cat’s servant” is the chosen line that I think summed up my avatar perfectly.

Big Brain’s local, party-style multiplayer is one of its focal points, but the asynchronous online multiplayer is also fantastic. Using ‘ghost’ data to record your performance across the many different timed tests in ‘Ghost Clash’, you can challenge not just friends and family, but anyone from across the world. Defeat anybody from a retiree in Japan to a university student in Sweden, and slowly climb a world ranking leaderboard, which resets each month.

I guess the only criticism I can throw at Brain vs. Brain lies in its overarching sense of urgency. Particularly in the online vs. challenges, where you’re racing to complete tasks as quickly as possible, it can be a stressful dash to the finish line, far removed from the more laid back vibe of a Kawashima sudoku puzzle. Minigames are intuitive and easy to pick up, but with the competitive aspect of the game favouring those dexterous with a touchscreen, it may alienate older or less familiar players somewhat.

This isn’t something that I’ve had a problem with, though, and the local multiplayer matches among families shouldn’t suffer. However, when the margins between victory and defeat are so close it could be an issue, given that titles like Big Brain have mass appeal, aimed at a wide range of people and not just the core Switch players that are familiar with the controller.

Overall, at an appealing price point that’s half that of a normal retail release (and one that you can actually find below the eShop price in UK retailers, if buying the physical cartridge), it’s extremely easy to recommend Big Brain Academy: Brain vs. Brain.

The online multiplayer is a novel way to get competitive with friends, the local multiplayer makes for intuitive fun with family, and the swathe of challenges on offer means that you can always find something to put your mind to the test, no matter what type of thinker you are. If you want something fun and different to play as we head into the New Year, then it’s a bit of a no-brainer.

With an extremely well-polished repertoire of challenges and a stellar asynchronous multiplayer component, Brain vs. Brain makes for quite the return on Nintendo Switch to the Big Brain Academy, and at an enticing price point.