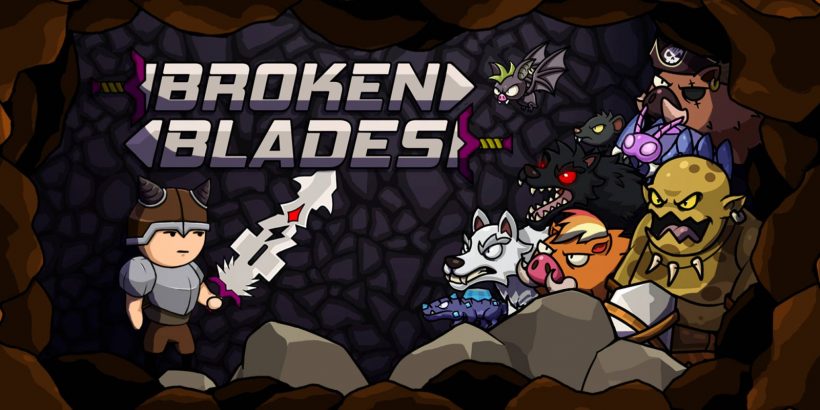 What happens if you bring together the punishing yet rewarding progression of Dead Cells, mix in a main, changeable weapon like in Mega Man, and finally sprinkle over a large, explorable area like Metroid? What if you then take this killer idea and give it to a ten-year-old to make? Congratulations, you’ve just made Broken Blades.

You know things are going to be a little ropey as soon as you open the game. The title screen has a typeface that wouldn’t be out of place in a Flash game from two decades ago. An option to start with Easy or Hard mode (and zero explanation of the difference) and you’re away.

Immediately, the second mental alarm activates as you start jumping around. There’s no sensitivity to the jump; it’s full power no matter how long you press the button. It wouldn’t be such a deal if a bunch of enemies didn’t float around somewhere in the middle of the jump arc and your blade didn’t start as a Fisher Price penknife. You either launch over the top or walk into them from below. As you can initially only stab forwards, you’ve immediately lost control. You pick up a power up. No explanation of what an “Insec slayer” (sic) is, so you just amble on choosing between obscurely named items, with no clue of whether they have any meaningful effect on your character.

The game’s gimmick is that the blade can be upgraded by finding pieces that have different effects. I’m either the unluckiest player ever or this simply doesn’t work. Every single blade piece that I found was just a standard sword piece that had no additional effect. Over and over again. In the game’s screenshots I see different shape blades that—I assume—do something. But four bosses in and I just kept picking up the same blade again and again.

The items and pieces are scattered around the most generic-looking cave you can imagine. There is no sense of where you are, or where you’re heading to. Just the same boring corridors ad nauseam. There are some caves you can eventually explore…  which look exactly the same as everywhere else.

So much is poor in this game. For starters, there’s no map, so you end up journeying through the game by rote. It’s the dire antithesis of exploration. The enemies don’t knock back, just continuing their same stale pause-attack-pause cycle. There’s unnecessary profanity used at the start of the game.

If you’re lucky, the power ups cause you to become so overpowered that you hack away at bosses without even caring about the battle. Just as well as the battles are not clear about what you have to do anyway. As you finally feel like you’re getting somewhere, the game trolls you with incredibly cheap deaths and you start over again.

It is really upsetting to review a game that objectively fails to deliver because of a lack of polish and attention to detail.

Broken Blades promises a blend of platforming, roguelite, and RPG. Sadly, behind its Scribblenauts-style cartoon sprites is ultimately a lazy game. It’s all let down by the individual pieces only ever being “good enough”. No love, effort, or creativity is infused to elevate it to something beyond a game I never, ever want to play ever again.