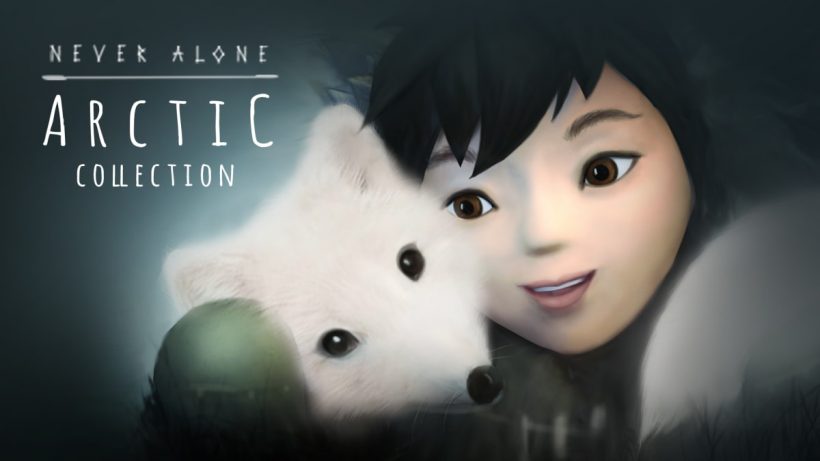 It’s always a refreshing experience when a game, or indeed any form of media, teaches you something about the world. Games are often seen as an escape, a chance to leave everything around you and lose yourself in an exciting new world, even though every game has its roots in reality. Said roots are usually just the basis for creating something new, but the educational opportunities that arise are plentiful, yet rarely fully utilised. Never Alone grasps those opportunities with both hands, providing a satisfying gaming experience, whilst also exploring the rich culture of the Iñupiaq people of Alaska.

Never Alone sees you follow the journey of Nuna and an extremely skilled fox, as they attempt to uncover the source of a terrible blizzard that threatens to wipe out their village. Through its puzzle-platformer gameplay, you traverse the world, encountering numerous dangers and surprises along the way. Never Alone isn’t a very long game, but that length is well suited to the story it tells.

Through the game’s sometimes hidden collectibles, you’ll unlock a variety of video clips featuring Alaska Native elders and community members, as well as historians, that detail specific aspects of the story. As a result of unlocking these, the game feels more well-rounded, the details and lore not explored through gameplay receiving their due in this supplemental content. With the option to watch these videos whenever you like as you unlock them, the player can decide for themselves how much they want to view. This provides a fine balance for those looking to simply play through the game, and if anything makes the clips more inviting as you’re not being forced to watch to progress.

The videos themselves are very well crafted, each a snappy yet well-detailed account of its subject. Featuring the Native people is an effective way of making each clip more engrossing. Through their words and experiences, you really feel the emotion tied to what may seem like even the simplest of things, as these are first-hand accounts of experiences very few of us will ever know. The clips lend further meaning to the gameplay too. Learning the spiritual connections behind phenomena such as the Northern Lights, or the links felt toward animals, presents the game in an entirely different manner. Each level you play through suddenly carries deeper meaning, and it’s a fascinating way of achieving such an effect.

Everything about Never Alone is incredibly atmospheric. Even the title screen presents a sense of cold foreboding, and this persists throughout the game. A dark border circles the screen, evoking a clear sense of claustrophobia, the threat of the never-ending blizzard literally clouding your view. Meanwhile, a slight blur over everything strengthens the effect. The sound design is subtle yet mesmerising. The environment takes the forefront here, each crunch of the snow under your boot, or the distant hoot of an owl accentuated by the game’s muted design. As a result, when the music does ramp up, during moments of beauty or tension, the effect is all the more powerful. The game is a true wonder to behold, effectively conveying the beauty and danger of its harsh environment all at once.

While Never Alone shines in its storytelling and art direction, its game design is unfortunately lacking. The puzzle-platformer nature of the game is well suited, but neither of those aspects feels fully formed. Both are often far too simplistic to feel rewarding in any way, which is a shame considering the potential behind its mechanic of controlling two characters. You’re able to switch between Nuna and her Fox, the latter gaining control of the spirits who serve to guide you through the game. It’s a brilliant idea and provides some puzzling challenges, although the best of them are few and far between, with the majority of your time spent simply lowering platforms for Nuna. This feels like it could have been expanded upon in some really interesting ways rather than ending up as it did, a missed opportunity.

I found the game also suffered from some rather intrusive bugs. Button inputs were frequently delayed, causing simple tasks to become frustratingly difficult. One section of the game saw the camera slide offscreen, and another caused a complete reset after becoming frozen. These are just a few examples that, sadly, take you out of what is an otherwise engrossing experience.

Technical mishaps aside, Never Alone is a stunning game that I would highly recommend people experience for themselves. This is a title where the gameplay serves the story, and it’s a shame that gameplay doesn’t reach any great heights despite the potential behind it. However, the world and the atmosphere and the history behind everything you experience more than make up for these shortcomings. The impact and importance of this game are clear in the culture it so proudly displays, and I hope it provides a foundation for other such ventures in times to come.

Never Alone falters somewhat where the gameplay is concerned, but you’re unlikely to mind as you learn more about the rich culture it portrays. Its stunning environments pair perfectly with the deep meaning behind every aspect of the world, making for a truly unique experience.