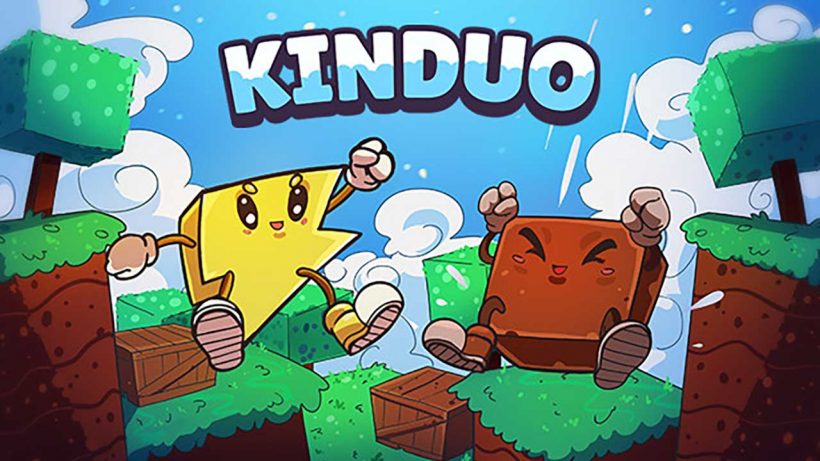 Puzzle games usually start out enjoyable but quickly become more challenging as new mechanics and more difficult levels are unlocked. The same is true of platformers, even more so in some cases. Puzzle platformers like Kinduo toe the line between these genres, and the good ones are enhanced through the unique blend of gameplay they allow for.

Kinduo is a short, simple title with a total of 30 levels and a secret bonus level for those who really like to push themselves to the limit. Players control two characters, individually in solo mode or together with a friend in co-op, to solve each level and reach the door to move onto the next.

The lightning bolt is more agile with a higher and longer jump, while the slower brown brick character can’t jump as far or high, but can push blocks into useful places. Over the first few levels, you’ll learn about how these characters interact with each other, uncovering new abilities such as a lighting spark, dash, and the power to hold down switches.

Each new ability is taught to the player through experience. For example, a signpost may show how to activate a dash, but you won’t really know how to use it until you’re faced with a level where mastery of it is essential. At times, Kinduo can be an unforgiving game, forcing you to restart the entire level if you’ve done one thing out of sequence, but that’s where it shines brighter than other small games of the same ilk.

The early levels of this game are deceptive. They lull you into a false sense of security, believing that you’ll master this first chapter and that there must be more beyond it. Around halfway through though, you’ll see the true nature of Kinduo. The game’s charming appearance is there to fool you into thinking it’s easy, while most of the puzzles in the second half of the game require you to sit and stare at them for 10 minutes until you can even begin to attempt them.

The secret here is that Kinduo has been incredibly well designed and masks its difficulty with its cute imagery. It continues to introduce new mechanics, even once you’ve discovered everything you need to know about its characters. New blocks appear and can be used in interesting ways, but many are red herrings. This forces you to try out multiple solutions before seeing through the fake puzzle to the solution that lies beneath.

A good example of this is TNT boxes being used to hold switches instead of regular boxes, or a key only being accessible before you do anything else in a level rather than the last item you pick up. The game constantly subverts your expectations, which helps to make up for how short it is.

While Kinduo does have secrets to unlock and hidden items you can find if you’re clever enough to grab them, it ultimately leaves you wishing there were more levels to it. What you get is just enough to master it, just enough to make you feel like you’re ready to be tested again, and then it ends. If you’re looking for a fun little game that can occupy an evening and freshen your tired palate after a long playthrough of Kirby and the Forgotten Land, then this is what you’ve been looking for.

Kinduo is a fantastic puzzle platformer, easy to learn and not too difficult to master. But it doesn’t present players with enough content to keep them engaged for longer than a single evening.