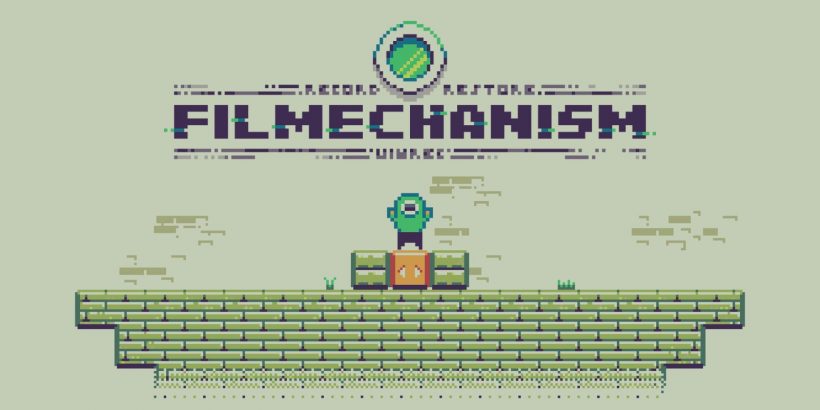 I shouldn’t get too hung up on the title of a game, but … FILMECHANISM? Really?! Thankfully, this clunky portmanteau in arrogant uppercase is not representative of the game overall. This is a tightly-honed, accessible puzzle-platformer, much more inviting than its name.

FILMECHANISM begins by introducing its main mechanic: time travel. Yes, it’s been done plenty of times before (The Gardens Between, Timelie, Braid), but for good reason: messing about with time is fun, and it screws with your brain just enough to create the potential for many cunning puzzles.

You play a one-eyed (-lensed?) creature that seems to be part-camera, but mostly humanoid. There’s almost no plot, so the game just sets up your ‘get to the flag’ goal across a series of 200 levels. 200 might seem huge, but they’re effectively divided into three sets, and—frankly—it’s not that many levels for a modern puzzler, anyway!

So, the time-travel mechanic works as follows. In each level, you can collect a number of batteries (1–3). Each battery allows you to take a snapshot of the level, which records the positions of certain movables. At any point, you can then restore the scene to a previous state, except your own character will stay wherever they were. That’s more-or-less the entire setup, modified only by what kind of level designs the devs can muster around it, and what additional mechanics they can introduce.

You’ll find yourself photographing a block, pushing it right two spaces, then restoring the image so the block’s now one space behind you, to the left. Now add in every combination of what you could do with that simple mechanic, using various contraptions like levers, switches, flipping platforms, and spikes. You can only clear one block with a jump, so much of the puzzle-solving involves figuring out how you’ll jump from one point to the next.

It’s quite a difficult concept to grasp at first, particularly when other objects come into play. The game does a lot of introductory hand-holding, maybe acknowledging that some players will find it difficult to wrap their heads around. But its real concession to managing difficulty is the presentation of three separate routes through each of the five worlds: easy, hard, and hell. This is quite a bold move, although it will no doubt cater for several different types of player, from completionists to those just dipping a toe in the water.

In terms of how it presents itself, the game is absolutely charming and wins in almost every aspect. The blocky, colour-muted graphics are an approximation of a simple GBC game, and the clarity of each single-screen level makes it perfect for hand-held gaming and focussed puzzling. The soundtrack is adorable: a catchy J-pop ditty that never grates despite its repetitiveness. And the transitions, menus, and so on are all put together so well; the game has a very nice polished feel to it that helps justify its not-totally-bottom-of-the-barrel price tag.

Besides the window-dressing, there are two real factors driving how well FILMECHANISM plays: the individual levels, and how they’re linked together. Since there isn’t an awful lot of variety in the gameplay, it’s impressive how well the game creates different experiences with its puzzles. Most hinge on exactly when you take your photos, but many are also focussed on the plain nature of moving obstacles and arranging blocks for your own benefit. The order in which you take on each level is absolutely critical, and you’ll encounter plenty of “of course!” moments as you play. Several levels have some sort of knack that makes the level obvious once you discover it, but impossible until then.

So FILMECHANISM gets all the basics right but, unfortunately, it lacks much beyond the straight series of puzzles. The devs have, apparently, tried to address this by introducing a speed run mode. In a puzzle game like this, that only really requires 1% dexterity against the 99% thinking, it’s a strange move. These levels just aren’t suited to speedrunning.

Once again, I find myself reviewing a game whose core gameplay is excellent, but fails to deliver any real additional value. Fine for an absolute budget title, less so for something approaching mid-range, though. Modern standouts like Baba Is You and Bonfire Peaks mix up the level formula far better than this and presenting levels in a linear format just doesn’t seem to cut it any more. I can’t help but imagine how this could’ve been done better — maybe a world map with different branches, shortcuts made up of much harder levels, etc.

FILMECHANISM is a very enjoyable puzzler, particularly suited to handheld play. Its central idea is implemented well, and helps to create a nice range of puzzle challenges. But there’s little of value outside that, and that core idea is not so original that it’ll grab you and refuse to let go. FILMECHANISM is a great ‘pick-up-and-play’ title to fill a few spare moments here-and-there, but it’s not really engaging enough to be much more than that.

FILMECHANISM is a series of excellent puzzles with minimal packaging. The look and sound of the game are fine, but the overall structure is a bit uninspired and there’s little beyond novelty to hook you in.