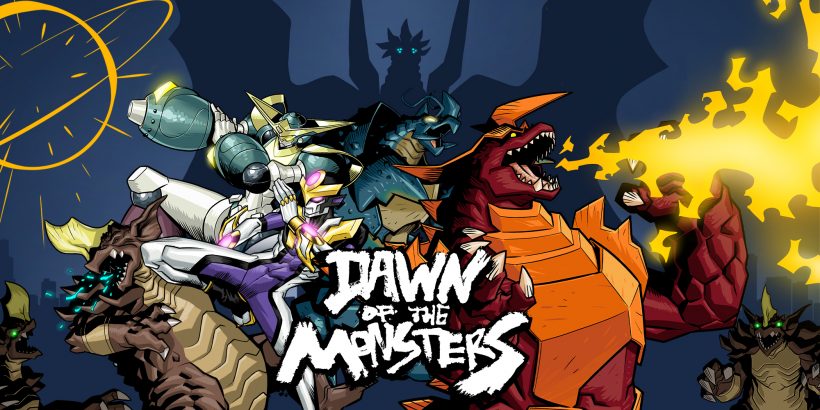 Dawn of the Monsters pays homage to the most iconic kaiju properties out there. It mimics not just the scale of the monsters, but the themes as well. Players stomp through cities and fight colossal beasts. The characters wield trains and buildings with one hand. It’s all punctuated with story beats about an “awakening” and climate disasters. It’s pretty much a love letter to the genre disguised as a 2D beat-em-up game.

That said, the game stands on its own two monster feet. There’s just something simple and satisfying about big monsters hitting each other, and Dawn of the Monsters offers that in spades.

The combat is slower than your average beat-em-up, which is probably expected thanks to the sheer size of the combatants. That doesn’t stop it from being fun though. Punches feel powerful, and stringing together combos never gets old. Each of the four characters is suited to this slower style of gameplay, with special moves and attacks that all work well with the pacing. I found myself gravitating towards Ganira, the Terror of the Seas, who can summon a crab minion to help her juggle enemies and split aggro. That little crab friend carried me through a lot of tough fights I might have lost otherwise. Thanks, crab friend!

The enemy variety is impressive, with new ones being introduced in almost every level. It starts a little slow, but by the end, you’ll be fighting dozens of enemy types in different hordes. These groups can shred your health swiftly, but weakening enemies lets you execute them for a quick heal. It was always satisfying to come back from the brink of defeat with a sneaky execution in the middle of a pack of monsters.

The variety extends to the numerous “augments” you can choose for each character too. Beating missions allows you to pick from a selection of randomised perks. These can be anything from damage buffs to supportive abilities and everything in-between. Eventually, I ended up with an augment that gave me a 5% chance to hit for 500 damage, which instantly kills most things on the field. Things can get pretty ridiculous with the right augments, and they really boost the replayability too. Trying different characters with new augments helps to make each mission feel more unique.

Overall, there isn’t much to see beyond the campaign (which can be played solo or with a friend). There’s a storyline weaved throughout, and some lore tidbits and unlockable skins for characters. But you’ll want to play this game for the gameplay, not the narrative. It’s pretty generic stuff, with a couple of interesting ideas locked away in the lore database while more standard story beats take center stage. One late-game twist is foreshadowed early on with the subtlety of a skyscraper to the face. I guess there’s only so much you can do with a story about big monsters slapping each other.

Regardless, Dawn of the Monsters is a solid romp for fans of beat-em-ups or monster-based action. Addictive combat carries this game, which is exactly what you want from a kaiju brawler. It’s flashy and fun, with enough meat on its bones to keep you entertained.

Dawn of the Monsters isn’t reinventing anything, but that lets it focus on what counts – punching big monsters in the mouth. If that sounds like fun to you, then you won’t be disappointed.