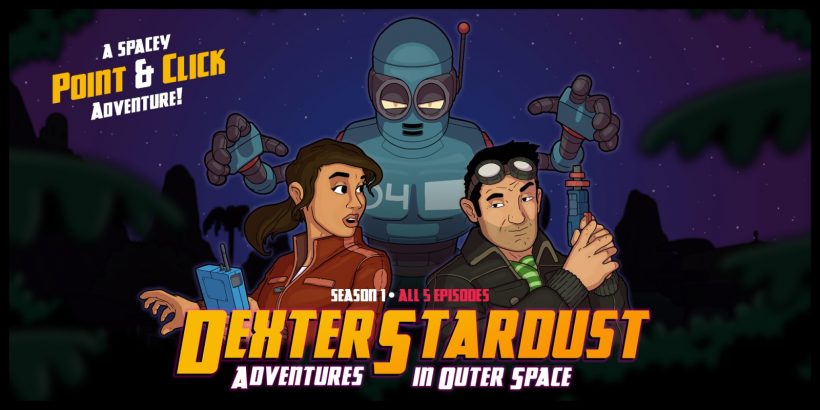 In all its promotional material, Dexter Stardust is described as a “classic point and click adventure for all” and I can’t disagree. All the parts of the formula are here: cheesy family-friendly humour, inventive-but-not-impossible puzzles, and characters with a dash of personality.

I was immediately taken by three things: the smooth and pleasing line-illustrated artwork, the fully voice-acted script, and the presentation akin to a classic 50s-era cartoon show. In parts, it even bears comparison with Futurama, and that’s high praise indeed! It’s all a lot more polished than you might expect for an indie, although there are some issues here.

Dexter Stardust, the character, voiced by the excellent Munk Alejandro, is a fairly basic, slightly sarcastic, pretty likeable dude. Nothing about this game is particularly challenging—not the storyline, not the puzzling—but it plays this to its advantage and we end up with a highly accessible and enjoyable, if short, adventure. During your mission, you’ll go from Ganymede to Mars and more besides. On the way, you’ll be assisted by practical friend Aurora, a robot, your uncle Jeda, and a full cast of supporting characters. The background story involves inhabitants from the tenth planet wiping out the Earth’s population, and the main plot builds upon it effectively.

Dexter Stardust is divided into five episodes with varying amounts of puzzling, storyline, and overall content. It’s quite nice to have the variety, and it fits into the overall theme of the game really well. It is a shame that only one episode really has anything significant in the way of puzzling, but at least the cut scenes are enjoyable, with everyone nice and sympathetic. It’s all fun-for-all-ages, and the game never suffers from puzzles that are obscure beyond all reason.

But the game’s main fault, as far as experienced adventure gamers are concerned, at least, is its difficulty level. Descriptions of puzzles almost always involve clues that heavily hint at the required object, if not just coming out and saying its name point-blank. To those wanting to stretch their grey matter, this can come across as rather patronising, and you may find yourself on autopilot at times. The only times I remember getting stuck involved missing a place I could walk to; the locations aren’t always totally clear.

Aside from that, a few minor faults: sometimes the game fails to register a target properly during motion, and the inventory’s UI is poor. There are also quite a few language issues and many cases where the voiceover doesn’t quite match the text. This is more-or-less forgivable, though, because the game does such a great job elsewhere. The way it integrates the storyline with the action and the episodic presentation all work very well together.

Overall, I still enjoyed Dexter Stardust, despite the low amount of challenge involved. It’s an easy-going storyline, with plenty of approachable humour and enjoyable tasks, and I’m invested enough in these characters that I’ll probably seek out the sequel, the next season.

Dexter Stardust is a short and straightforward adventure that plays on its charm. With witty moments, an enjoyable storyline, and great production values, this could be the beginning of a successful franchise.