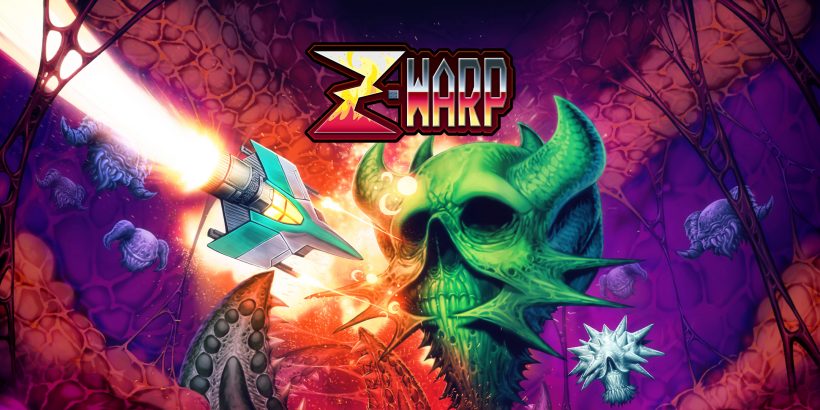 Ah, the mighty shoot ’em up. Prevalent in gaming since its humble beginnings, this staple of the medium may not hold the relevance it once did with games such as Space Invaders, but it’s nevertheless still going strong. The Switch alone is home to a vast number of these titles and, as such, it can be hard to stand out from the crowd. Z-Warp is an unfortunate victim of this, offering up some solid gameplay, but never quite doing enough to differentiate itself from all those games that came before.

If there’s one thing that definitely does stand out about Z-Warp, it is the setting. After a starship capable of space-time warping is lost to the unknown depths of the universe, it’s up to you to track it down and unearth the mystery surrounding its disappearance. This grandiose mission sees you travel to a truly nightmarish realm where everything wants you dead. This realm stands out as one of the more interesting parts of Z-Warp. With the seeming notion that you’re travelling through the body of one rather gigantic beast, the game plays into the grotesque, body horror imagery of your environment. Each boss you encounter stands as another major part of this “body” and becomes more twisted the further you venture. The standard enemies you encounter as you play get repetitive fairly quickly, but the inventiveness of the boss design and environments ensured the game remained memorable to me long after my time with it had ended.

As with most shmups, the story is more a catalyst for your adventure rather than holding any real weight, but it does at least segue nicely into the gameplay. Unfortunately, this is where it feels Z-Warp fails to live up to its potential. Z-Warp is, quite simply, another shoot ’em up game. This isn’t necessarily anything bad, but in such a crowded landscape it’s hard to recommend over something that experiments more with the genre, such as Ikaruga. With so many different games vying for our attention these days, it helps to have a hook, and the unique setting of Z-Warp just isn’t enough without the unique gameplay to back it up.

Depending on the difficulty level you choose, it’s also a very short game. I found the game to be a decent challenge, even on lower difficulties, but this is a title with substance for those looking to aim for high scores. Indeed, diehard shmup fans will likely glean a lot of enjoyment from the title through both its Story and Endless modes, but there’s little to aim for beyond increasing your score. Z-Warp definitely offers up some seamless, old school, shoot ‘em up action, but it’s potentially too old school to offer up any real thrills.

There’s a lot about Z-Warp that all just feels a little underwhelming. No part of the game is bad at all, there’s just not a lot to it. The experience is a relatively short one, with little incentive to replay, and the gameplay is just standard shmup fair. Z-Warp is quite simply ok. With a library as varied as the Switch’s, however, I would recommend seeking your shoot ’em up action elsewhere.

Z-Warp offers up some tried and tested shoot ’em up action but little besides. Those who enjoy amassing high scores should find a decent amount of enjoyment from the game, but its appeal is limited.