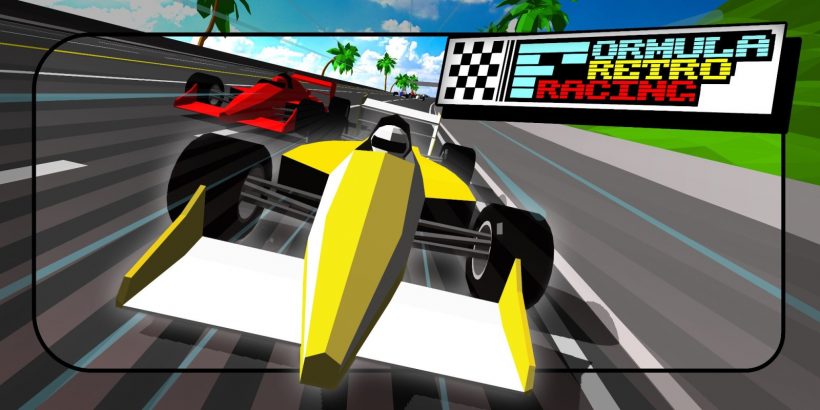 When racing is dominated by one plumber and his pals, does a bare-bones, old-school driving clone really stand a chance?

Formula Retro Racing is, first and foremost, a game centred around Formula One motor racing. This is not karting or rallying, this is—or should be—the ultimate competitive driving experience, with the fastest speeds and the most terrifying accidents. More specifically, it’s a tribute to a type of early-3D, polygon-based racer and, even more specifically, Virtua Racing. A huge success in arcades, Virtua Racing went on to wow Megadrive owners and those who played any of its re-releases across platforms. The original arcade version is even available on Switch, in a spruced-up version as part of the Sega Ages series.

So, how well does this homage work, and how likely is it to give Mario Kart a run for its money? The answers are “well” and “not very”, respectively. Formula Retro Racing demonstrates well that, however good an engine is, it needs a decent chassis with some attractive livery to succeed. FRR intentionally eschews hyper-realistic graphics for the sort of low-poly presentation that was ubiquitous in the mid-nineties. It’s an acquired taste, but one which is less relevant when you’re hurtling around a corner at a couple of hundred miles per hour. Sure, in screenshots FRR may look pretty ropey — not even quite up to the 1992 standards of Virtua Racing itself — but it manages to faithfully recreate a sense of speed very well, and that’s most of the job done.

‘Most of the job’ is, sadly, as high as FRR aspires. There’s car customisation, but only of the most rudimentary kind: pick from a preset list of 20 colours. There’s progression via points earned to unlock the three final tracks, but this resets each time you play the game, in true arcade-style. Multiplayer is supported, but only locally.

FRR does still get the main racing action right, which is no small mercy. Hurtling around Monaco (surely the definitive racing experience) is as much fun here as anywhere, all the spills and thrills captured, the gently rising straights leading to the tightest of hairpin bends, the claustrophobic scenery, the proximity of the crowd. That rush you get from overtaking at high-speed, with the narrowest of opportunities, is ever-present.

Where it succeeds most, perhaps, is its use of simple controls and carefully calibrated difficulty levels. On automatic, at beginner level, the game is chaotically entertaining: damage matters little, mistakes are fast forgiven. But at the hardest level, the timing checkpoints (in arcade mode only) are paced just well enough to generate a huge amount of challenge.

The problem is, there’s just not enough to grab you to keep you coming back for more. That smooth gameplay is certainly good for some repeat plays, and if you have another local player to compete with, there’s mileage to be had, even with a split-screen display. But the small number of tracks (eight, two of which are basic ovals), the lack of any upgrades, and a poorly implemented Grand Prix mode won’t sustain the enjoyment for long.

Formula Retro Racing is pleasingly accessible and will offer instant nostalgia to 90s arcade-dwellers. Yet its lack of depth, online options, and long-term replayability means that only the most dedicated petrolheads will persist for long.