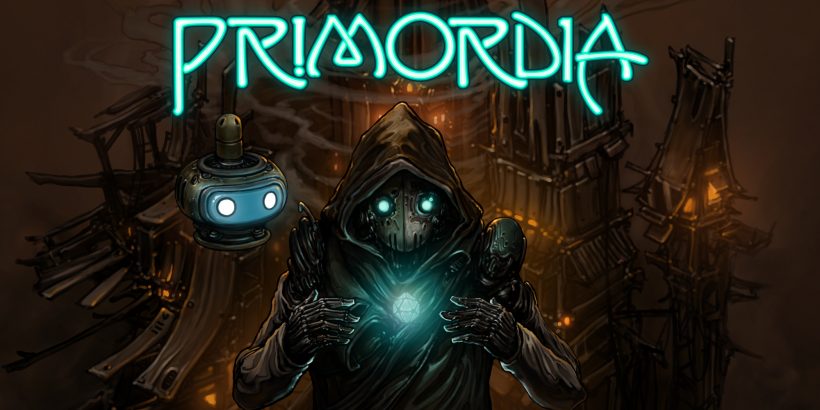 Classic point-and-click adventures have had their time, at least for the most part. While some titles can be dredged up from the past for a remake that attracts thousands of new fans, most see a quick burst of excitement and gather a cult following if they’re interesting enough. Primordia falls into the latter category here, but it’s still very much worth your time today if you enjoy logical puzzles, great writing, and a post-apocalyptic cyberpunk setting.

As you may have guessed, Primordia is a re-release, a point-and-click game that was initially launched in 2012. However, the very nature of these games means that it stands up today against anything in the same genre. This is mostly thanks to the fantastic writing, both in terms of the story and characters.

You take on the role of Horatio Nullbuilt and his floating droid companion Crispin in a world where humans are long extinct. Horatio and Crispin live a peaceful existence in an old airship until a droid pops along and steals their power core. The pair embark on a journey to reclaim their power core so that they can restore the airship and fly away forever. As you’d expect, the story gets much more complicated very quickly, and you end up spending more time moving between the various locations in the desert of this desolate world, solving puzzles or finding solutions to extremely niche problems.

The story is still great today because of its setting and brilliant writing. The story itself is good, but the characters around the world make Primordia shine in a genre that’s packed to the gills with similar titles. I found myself wanting to jump back in over and over because of the story or the characters, many of which are enthralling. For example, there’s one droid that worships an unexploded bomb and acts as a monk at a shrine, preventing anyone from getting close to the sacred object.

The crux of what makes the narrative and world so engrossing is the fact that humans are worshiped as gods. The closer you are to the original design that man first made, the better you are, and robotic society revolves around this ethos. If that sounds at all interesting to you, then this game is worth a go.

There’s little you can do to innovate in the point-and-click adventure genre, but Primordia still manages to offer something new despite it being a decade old. The gameplay is what you’d expect to see, static screens with moving characters and interactive objects. Mercifully, there’s a button to reveal all interactive objects so you don’t need to hover over everything on-screen, guessing at what to do next. A datapad contains a log of important numbers you’ve found, and you can fast travel between points at the click of a button. This is a refreshing way to play given that most other titles in the same genre would force you to memorise or write down things that are important, and trek through multiple maps to reach your point of origin.

What keeps puzzles intriguing is that you can interact with objects in three ways. You can either look at them, touch them, or send Crispin to interact with them. This opens up way more possibilities in every map, which can make puzzles seem overwhelming at first. After a while though, you start to realise that most puzzles have some logic to them, so you’re not going to get impossibly stuck for too long. A good example is that you must use a set of coordinates not on a map, but on a telescope, to scout out the area around you. Most puzzles have some twist like this, and they never feel dated, but they can be frustrating when you don’t get the answer straight away.

While you use a cursor to interact with objects in the game, it isn’t as awful as you might think. I definitely don’t enjoy this type of UI, but it works fairly well in Primordia. It’s far from perfect, but it’s much more serviceable than in other games. The saving grace for the controls is the addition of the touchscreen, through which you can do pretty much everything. Touch controls are instantaneous and transform the game, making it feel far more modern than it is. This is a tiny touch, but it goes a long way to improving the overall experience.

You may not have heard of Primordia before, but you’ve probably heard of developer Wormwood Studios, and that’s because the company is known for quality titles that have brilliant stories and worlds. This is no less true in Primordia, and it seems as though many of the elements in the developer’s later titles can be seen through this much older one. This adds another element to playing Primordia. You’re not just experiencing an interesting world filled with wacky characters who all have some central belief system guiding them, you’re playing a game with some historical significance. It feels akin to Nausicaa of the Valley of the Wind. Man has destroyed the world and you’re living through the aftermath. There’s nothing you can do and the answers of the past are just out of reach.

Primordia is a solid story with a point-and-click adventure built around it. A few unique mechanics keep things fresh throughout, whilst fantastic writing keeps frustration at bay when trying to solve the mostly logical puzzles.