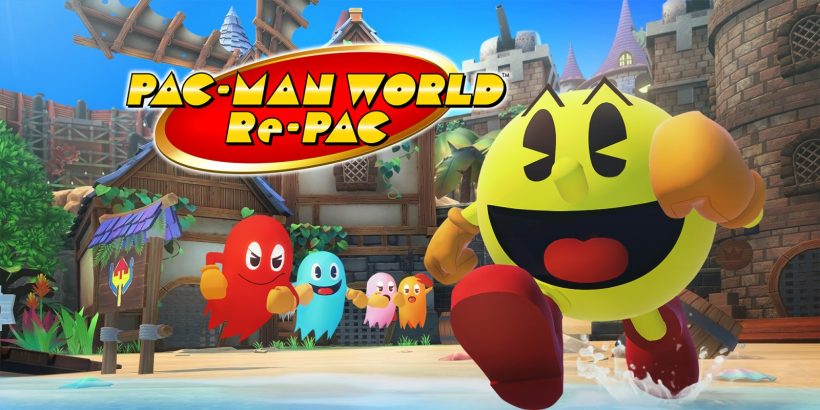 The Pac is back in Pac-Man World Re-PAC, a recreation of the original Pac-Man World game. Initially released in 1999 on the PlayStation, World has been brought back to life for modern systems. In it, the iconic spherical gobbler is tasked with rescuing his friends and family after they’ve been kidnapped. You take control of Pac-Man as he traverses a variety of locations in an attempt to bring them home.

As far as 3D platformers go, there’s a sea of classic titles still waiting to be remade. We’ve seen modern recreations of fan-favourites like Spyro, Crash Bandicoot and many more, but plenty of games are still waiting their turn in the spotlight again. Does Pac-Man World earn this new re-imagining?

Well despite being remade, World definitely shows its age. The platforming in the original was never quite on-par with its big name competitors, but it feels even less impressive over two decades later. It’s a pretty basic adventure across different themed worlds, and it doesn’t really offer up too many fun ideas through each of its levels.

The remake essentially brings the visuals and mechanics up to modern standards a bit, but it’s not a game you’ll wish had a camera mode. It’s not ugly, but it’s not as nice-looking as other games in the genre. Other improvements have been made to the UI and various small parts of the game, but for the most part this is the same game from 1999 with a fresh coat of paint. In fact, the new look kind of removes a bit of the retro charm the original game had.

But what about the gameplay? There’s a lot of emphasis on making precise jumps closer or further away from the screen, which can be frustrating due to the camera’s placement. It can be a bit clunky, and Pac-Man’s abilities don’t really add much to the flow of gameplay. He can bounce to gain a bit of extra height and attack enemies, and he can throw pellets at them – though they barely go anywhere unless you stand there and charge them up. The most fun move is the speed boost roll, but it’s easy to fall off the level using it when the camera’s close to the action.

As for the levels themselves, they’re a disappointing mish-mash of different themes and locations, none of which blend together to feel like an actual lived-in world. Perhaps we’ve been spoiled over the years by titles like Donkey Kong Country Returns and Rayman Origins, where each level feels like its own lived-in part of a wider whole, but the lack of cohesion in World immediately stood out to me. You’ll go from a pirate beach to an ancient underground ruin to outer space, each inhabited by fairly uninteresting enemies.

The highlights of these worlds for me were the bosses which capped them off. They’re nothing special, but they at least manage to mix things up. The boss of the space world almost made me wish I was playing a Pac-Man shoot-em-up rather than a run-of-the-mill platformer. Sadly, getting to the end of each world feels like a slog despite them only having three levels. World just doesn’t introduce enough fun ideas to make it worth your time.

There are lots of things to collect in each of the levels if that’s your thing. You can find each of the letters in Pac-Man’s name, similar to the “Kong” letters in Donkey Kong Country. Typically, these letters are lurking behind locked doors that can only be opened by finding certain types of fruit. I don’t know why fruit is able to open doors, but open them it does.

You can also find tokens which can be used in a post-level slot machine. Landing on three of the same fruit gives you some nice bonuses, but the way this slot machine showed up after every single level quickly grew tiring. It breaks up the pace of the game a bit and I eventually found myself skipping it despite the potential rewards.

Then there’s the hidden maze levels, which are also found behind certain locked doors. When discovered, these allow you to play a traditional Pac-Man maze collecting pellets and evading ghosts. You unlock some right off the bat, and these were a nice break from the gameplay — although they quickly get repetitive too. The ghosts also show up in standard levels, and you can find power-ups which grow Pac-Man to a gargantuan size in order to gobble them up.

Outside of that, Pac-Man World is a very basic platformer which doesn’t really do anything exciting enough to warrant a playthrough. Die-hard Pac-Man fans might want to give it a look, and kids may certainly enjoy it. But for everyone else, it’s not quite interesting or creative enough to stand out on a console already absolutely filled with top-tier platformers.

Unfortunately for Pac-Man World Re-PAC, there are many big-budget and indie platformers out there that surpass it in both value and quality. Namco is asking for close to full retail price for this relatively short and dated title but, sadly, I was mostly bored while playing it. Pac-Man has never been known for 3D platformers, and I hate to have to say it, but this platformer is best left in the past.

There are many platformers out there deserving of a remake. Sadly, Pac-Man World Re-PAC doesn’t do much to earn one. It feels dated, with uninspired gameplay and basic level design. A few fun bosses and Pac-Man mazes can’t save it.