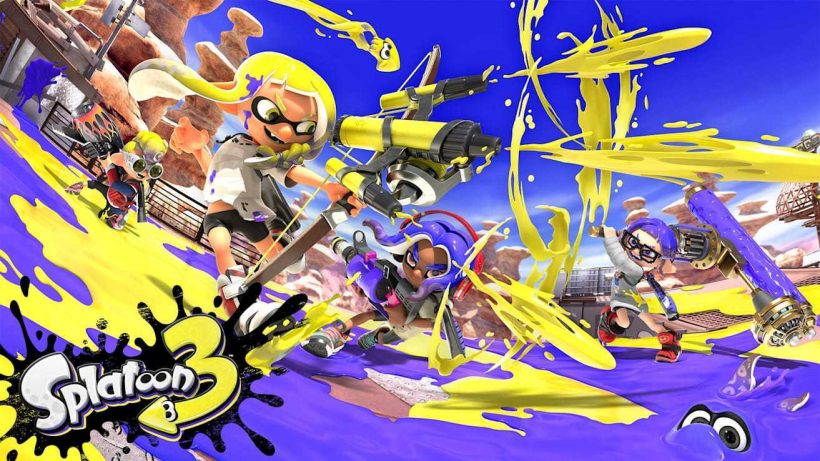 Splatoon 3 takes everything you loved from Splatoon 2, refines it, adds a few bells and whistles and quality of life improvements, then spits it back out, ready for you to cover it in brightly-coloured ink all over again. The game is packed with enjoyable content, but you’ll need to find which piece fits your preferred play style over time in this squid-tacular experience.

There are three main components to Splatoon 3; general multiplayer, Salmon Run, and the single-player campaign. All use gyroscopic controls by default, but this can be turned off in the menu. I didn’t love these to begin with, but I think the game is best played with them on because it brings to life the frenetic gameplay on-screen.

Multiplayer has been at the heart of the Splatoon series from its inception, and it’s never been more enjoyable than it is here. Everything has been improved upon from previous titles to make for an infinitely replayable experience you can get lost in. Grinding out matches unlocks new gear to purchase, which packs in power-ups to boost your Inkling in various ways. Nothing is more impressive than the new specials on each weapon, though. These range from a simple ink bomb to a Crab Tank that obliterates enemies, a shark you can ride through ink, and even a Zipcaster that lets you soar across maps to take more turf.

Salmon Run, the second major game mode, can be played solo or with a group of friends. The improved multiplayer lobby makes it easier to team up and hang out with friends because you’re no longer left hanging in a menu. While standard multiplayer is PvP, Salmon Run pits four players against enemy Salmonids. These grotesque fishy freaks bombard a small area in waves, and it’s your job to splat them with ink until they pop.

Boss Salmonids appear in increasing numbers as waves progress in this game mode, adding a tonne of variety to the gameplay. These enemies have unique mechanics and require you to fight them using specific methods before they drop their eggs, which you need to collect to progress. The massive variety of boss Salmonids pushes Salmon Run to the next level, as does removing the small window of time you had to play it in the previous game. Now you can load up Splatoon 3 and play nothing but Salmon Run if you want.

The best improvement to Salmon Run is the addition of a gargantuan enemy Salmonid that will only appear at the end of certain matches. It takes a lot to defeat this enemy, requiring you to use the eggs you’ve been collecting this entire time as weapons to deal big chunks of damage. The creature can cross the map in seconds and kill you as it moves, meaning you’ve got to be smart about dealing with its colossal health bar. Thankfully, you’re rewarded for the amount of damage you deal to this enemy even if you don’t kill it, though killing it does net you a nice bonus. The sheer panic this creature adds to a round is unmatched, bringing dynamism to the game mode that didn’t exist before. I can’t get enough of this mode because it’s about working together rather than against one another, but it’s great that Splatoon 3 has something to offer all fans of multiplayer titles.

Finally, there’s the single-player campaign. Splatoon 3 might not seem like a game that suits such a thing, but it’s been well crafted and fits with the world nicely. It starts out as a slow-paced tutorial but quickly dumps you into a large hub world that you can explore at your own pace. Strange furry goop has started overtaking the world, turning you into a fuzzy ball before dying if you touch it. Strangely enough, your tiny fish sidekick is able to chew through the goop when powered up enough, so it’s your job to take on missions around the six islands of the hub world, Alterna, to collect the power required to progress. Each clump of goop you remove opens up more of the path forward, but not necessarily towards the next island and the end of the story. It’s up to you if you want to remove all the goop on each island before moving to the next or smash through the story as fast as possible.

Exploration is rewarded with upgrades for your character, though I didn’t find any of them that notable, consisting mainly of cosmetics for your lockers, and cash to buy new items you can use across all game modes. Some of these rewards can be found by shooting glowing bulbs on the floor or simply by checking every nook and cranny. Most, however, come from missions, which make up the bulk of the single-player campaign. These missions don’t need to be completed in a particular order because they’re more short Splatoon-themed experiences rather than shooting galleries or action-packed set-pieces. Each one takes about 5 minutes to complete, which is about right. This brings the missions in line with a multiplayer match or Salmon Run round, meaning you can sit down with the game and take on any game mode without anything feeling like a massive time sink.

The single-player campaign is meaty, with dozens of small missions to take on. They make great use of the game’s plethora of weapons and their abilities which are pretty similar across every game mode. In Alterna, you get powered-up versions that last much longer and give you a better taste of the power they offer. Across all the missions, you’ll also be exposed to the powers enemies can use against you and find ways of adapting before you get too stuck into multiplayer. When you’re done, there’s even a final challenge to push you that bit further just when you think the single-player is out of the way.

There is a lot on offer in Splatoon 3, and though it may not all be for you, I think anyone that picks the game up will discover something they enjoy in each game mode. You might only like single-player games, but Salmon Run is a slippery slope once you get a taste of the level progression, as is the casual multiplayer offering.

Between each match or mission, you can spend your cash in shops to get new gear and weapons. As you earn experience in each mode, you’ll unlock more in each shop, allowing you to pick up an entire arsenal eventually. Gear and weapons have perk slots that you can tweak over time to create the best build for your play style. You might start out as a shrimp, but you’ll be a whale by the time you’re finished.

Nintendo plans to support Splatoon 3 for at least two years, so for that time, we’ll have Splatfests. These are engaging community events that last for a couple of days and ask players to pick one of three teams. Those teams then battle it out for supremacy in a flash multiplayer weekend. The first of these the game saw didn’t go to plan, but thanks to an early demo, we know that the main change Splatfests have received only serves to improve them. The event pits all three teams against one another in a three-way Turf War. These matches are a nice addition now and then that keep the game fresh.

The real benefit of Splatfests, however, comes in the way they energise the main hub world and get the community together to share their love for spreading ink. You’ll see players proudly sporting their chosen team and posting hand-drawn images showing their support. These images can sometimes be found spread around Splatsville, adding to the feeling that Splatoon 3 is a living, breathing game rather than a one-and-done package left to fend for itself. Players make it feel bigger and better, with something always happening for you to jump into when you load it up.

Splatoon 3 is a massive game that doesn’t alienate players by making them choose multiplayer or single-player. Each game mode is easy to understand and hop into solo or with friends, and the sense of progression will keep you engaged for years to come.

Splatoon 3 has something to offer everybody, regardless of what type of games you usually play. It excludes no one and keeps on giving long after the credits have rolled on its chaotic shooter action.