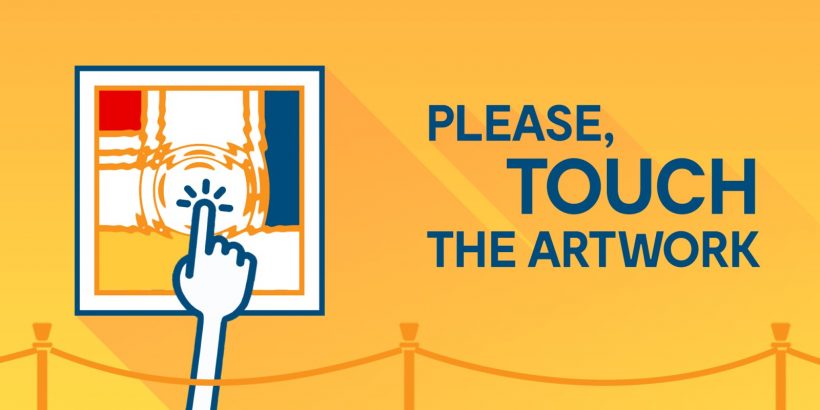 This game is so enamoured with its core concept, it locks out docked players altogether.

Please, Touch The Artwork (PTTA) does what it says on the tin: you’ll have to use the touch screen, so it’s handheld mode only. I guess this is to drive the point home, but whether you consider it pretentious or annoying or a welcome bit of originality is up to you. It does seem less justified when you consider the game is available on Steam; it’s not as if touch is a requirement here.

Aside from that minor issue, you’ll likely be impressed with the intro and opening stages of PTTA. Everything riffs on the instantly familiar style of Piet Mondrian, especially on the Dutch painter’s use of primary colours—red, blue, yellow—and grid lines. It’s a visual inspiration that’s not entirely original, but it’s done so well here you can forgive the cliché.

This beautiful visual style is accompanied by an appropriately jazzy soundtrack which makes for a fun experience. The game clearly invests a lot of its energy into looking and sounding the part, and this effort certainly pays off. But underneath all of this presentation, there needs to be a game worth playing.

Please, Touch The Artwork is a puzzler in three parts, with very different game styles. I found two of them more engaging than the third, but all are interesting novelties at the least. Each style has 50-60 puzzles, so there’s quite a lot of content on offer.

First up: The Style, based on pretty much the most recognisable Modrian artwork. Here, you’re presented with a grid of lines and need to fill in various rectangles within the grid in different primary colours. The challenge is the way the grid fills when you press on part of it: basically, outwards from the rectangle you press, but not including that one. Although there are many early levels that go through the motions, they get pleasingly harder later on, with twists to the format increasing the difficulty.

Next, there’s a game called Boogie Woogie. In this one, you’re sending cubes across another grid, to a destination. They’ll encounter certain powers on the way, including those that will rotate them, transport them, and so on. This tests forward-thinking and short-term memory, but it’s a bit more fun than that sounds! I didn’t find this quite as engaging as The Style, although it held my attention well for about half the puzzles.

Finally, New York City. This mode was my least favourite: it’s basically a big maze that you navigate to collect a bunch of squares. Although it has some of the most interesting graphics, zooming in and out of the playfield between puzzles, I found the gameplay here the least interesting of all, involving little more than autopilot.

The first two games suffer from a risk of deteriorating into trial-and-error, while the third is barely a game at all. Ultimately, for all its impressive packaging, the puzzles at the heart of it are a bit of a letdown. That’s not to say you won’t get enjoyment from them, particularly if you’re a puzzle fan with an open mind, but if ever a game embodied style over substance, I fear it might be this one.

Please, Touch The Artwork is a great experience, but it’s not a particularly great game. I found its puzzles fun and serviceable, but not very compelling. The execution is generally sound, except for an inexplicable handheld-only requirement.