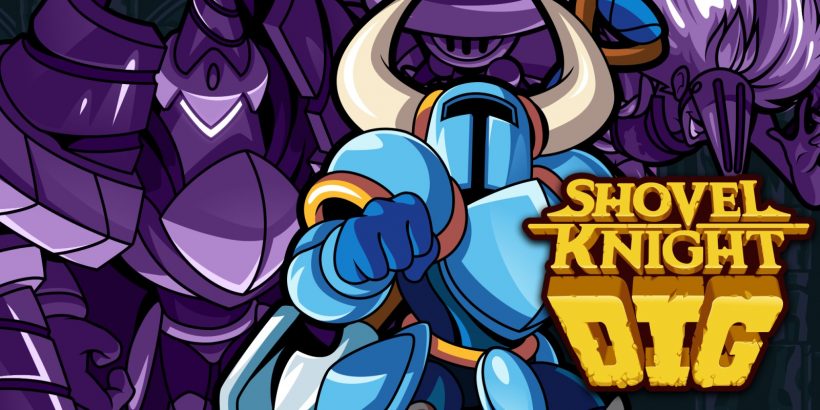 At this point, it is not an overstatement to say that Shovel Knight has become one of the most prominent indie characters of all time.

When you think about it, it is truly impressive to see how much of a reach he has. In addition to his superb trilogy of 8-bit-inspired platform games, he got his own range of amiibo toys, he’s appeared as a guest character in too many indie games to count, and he has even played a role in Super Smash Bros. Ultimate as an assist trophy. Not too shabby.

While Yacht Club continues to focus on the development of their The Legend of Zelda-inspired Mina: The Hollower, we get another chance to revisit the Shovel Knight universe with yet another spin-off. This time, Shovel Knight Dig offers an experience that feels closer to what we had in Shovel Knight: Treasure Trove. However, with a bigger focus on vertical traversal, and a rogue-like twist, Shovel Knight Dig manages to differentiate itself from other Shovel Knight experiences — in a great, yet challenging way.

Set in the oldest point of the Shovel Knight universe (confirmed by Yacht Club via their official timeline), Shovel Knight Dig shows us the conflict between Shovel Knight and the Hexcavators, a group of six villainous knights on a mission to find a mysterious treasure that is buried deep somewhere in the world. After watching an introduction where you see the Hexcavators’ leader Drill Knight stealing Shovel Knight’s precious bag of treasures, you must control the blue knight in his attempts to recover his belongings while he descends The Well, a weird underground dungeon formed by different biomes of ever-changing floors.

It’s on top of that basic premise that Shovel Knight Dig sets the overall structure of the game. Basically, Dig takes a more ‘classic’ approach to the rogue-like genre, in the sense that there are very few elements that persist between each run. This means that Dig is much more similar to games like Spelunky and Downwell than a rogue-light such as Rogue Legacy. In other words, every time you jump into The Well, you will restart your run from scratch.

When that happens, you will also be presented with an entirely different level setting, with unique configurations of platforms, hazards, and enemies. This doesn’t mean that Shovel Knight Dig is entirely random, though. On the contrary, as you progress through the game, you will start to learn what to expect from each biome. Dig is one of those games where your progress is not tailored by how strong the character becomes, but instead by your own improvements as a player, which involves both your knowledge about the game and your platforming prowess.

The few permanent improvements that Shovel Knight Dig offers take three different forms. You see, as you progress down The Well, you will collect gems — hundreds, if not thousands of them! Every time you die, you can take most of them with you to the surface, where you can choose to spend with a few different vendors. One of them will offer the option to unlock additional Relics for your runs, a form of temporary upgrade to the blue knight’s passive skill. A second vendor will let you open shortcuts to the deepest areas of The Well. And the blacksmith, at last, will offer you different armors that work as a kind of trade: they will give you a specific new power, but they also come with a limitation.

While Shovel Knight Dig comes with an overall rogue-like structure that is somewhat new to the series, the moment-to-moment gameplay is much more similar to the original Shovel Knight trilogy than Shovel Knight Pocket Dungeon was. In his natural state, the blue knight comes with the same moveset he previously showed in Shovel Knight: Shovel of Hope. As a consequence, long-time fans of the series will feel at home when controlling Shovel Knight on this new adventure. However, there is some novelty involved.

In contrast, you could say that Shovel Knight: Shovel of Hope presents itself more as a classic side-scrolling platformer. As the name of the genre implies, most of the time you will be walking sideways through each level. Shovel Knight Dig, on the contrary, is extremely focused on vertical traversal. The comparison with a game like Downwell makes lots of sense here, because most of the time, you will be… Walking down? Jumping down? Falling down? Well, perhaps an amalgamation of the three, but progress is made by delving deeper and deeper into the well.

Thanks to that, Shovel Knight Dig offers a very unique platforming experience that showcases Shovel Knight’s shovel drop ability — a special downwards movement where he can use his shovel to bounce off enemies and certain platforms. Entire levels and hazards are crafted with that ability in mind, as the game really demands you learn and master how the shovel works. This results in a platformer with an entirely different mindset at play, because every time you approach a new section or enemy, you need to think carefully about how to jump in order to progress unscathed.

That’s not all that’s in Shovel Knight’s basic arsenal, though. The blue knight can also use his shovel to attack enemies and to dig dirt and rock to the right, left, and downwards positions. There’s some depth to that dig movement too because Shovel Knight will propel himself in the direction he digs. Knowing that you can use the skill to quickly evade enemies, and move over spikes and hazards, among other cool interactions that the game explores as you reach the hardest levels.

It is really cool to see how the entire game is tailored in a way to encourage the player to use the Shovel Knight’s entire moveset. There are multiple secrets in each level that you need to dig up in order to unveil optional paths, giving you access to secret rooms with extra gems, vendors, or temporary power-ups. The levels themselves, too, are frequently built in a way that offers a riskier path where you can get more loot. Nevertheless, it must be said: Shovel Knight Dig is not an easy game.

Before you completely internalize Shovel Knight’s moveset, Shovel Knight Dig can feel extremely unfair at times. This happens as a consequence of the game’s rogue-like structure. Most of the time when jumping into a new level, you are given two different options, with hints of the enemies, hazards, or bonuses you may find. Still, the game still has a strong RNG factor. Sometimes, a stroke of bad luck is all you need to lose an entire run at a moment’s notice. Those moments can feel bad, but Shovel Knight Dig thankfully has tons of accessibility options for those not interested in spending the time needed to master its controls.

What is far from bad, however — I would actually say it is one of the best things about this game — is Shovel Knight Dig’s presentation. Dig is made in a superb pixel art style that really shines with charisma in every crevice. As good as the original Shovel Knight trilogy looks, it can feel at times that the 8-bit aesthetic was used to cover the limitations of what those games could really do. Shovel Knight Dig proves that by allowing itself to simply get inspiration from the 16-bit era, it can still chart its own course forward, free of the limitations of the era it replicates.

Going back to the small village on top of The Well, for example, is often exciting, as you may be able to meet a new character wandering there (which, like everything in the game, will be beautifully animated with an absurd amount of detail). Following suit, every biome has its own feel and look, and they also come with their own soundtrack themes, which perfectly suit the moment-to-moment action of Shovel Knight’s adventures.

On top of the weird difficulty spikes, the only other problem I faced during my runs in Shovel Knight Dig was a few buggy interactions where I got stuck in a specific room without a way to leave. Thankfully, those moments were rare, and the developers already addressed that and are working on patches to fix these punctual issues. In addition to that, Yacht Club Games also announced that Dig is going to release free DLC, which is always exciting and welcome to the rogue-like format of the game.

All things considered, Shovel Knight Dig is a brilliant rogue-like game that will have lots to offer Shovel Knight fans and rogue-like enjoyers alike. If you are up to the high difficulty of the game, you will be rewarded with a beautiful and enjoyable adventure that is totally worthy of the Shovel Knight name.

With a beautiful pixel-art presentation, Shovel Knight Dig reinterprets the moveset of the blue knight with a bigger focus on vertical traversal, as well as an entirely new rogue-like structure that is as enjoyable as it is challenging.