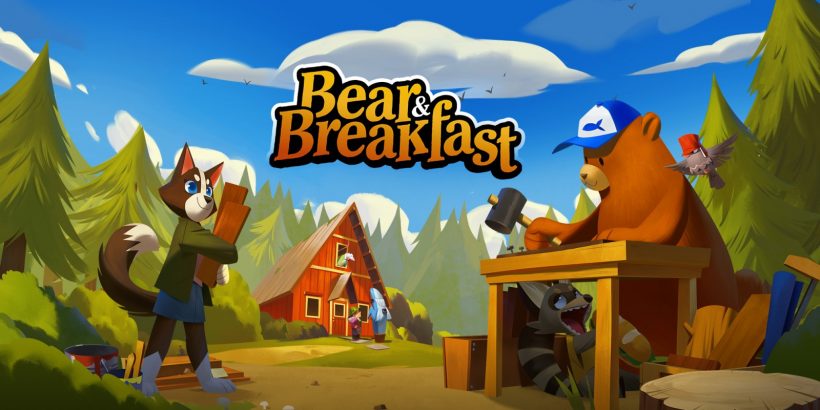 Initially due to release at the end of July alongside other platforms, the Nintendo Switch version of Bear and Breakfast was delayed, with no further release date given due to controller issues. Now, almost two months later, the game is finally available for all to play. This laid-back management sim has been long-awaited by myself and many others, but was this B&B worth the wait?

Bear and Breakfast is a charming, laid-back management adventure game where you take the role of Hank, a seemingly young, good-hearted bear who lives with his mum and friends, Anii and Will, in the woods. Humans have abandoned the area, leaving only junk behind (or valuables, depending on who you’re talking to — I’m looking at you, Took) and run-down, derelict buildings.

While this unlikely trio explored their homelands, they heard an unusual sound and rushed off (somewhat reluctantly) to see what had caused it. They soon came across a negligent old shack, and, with the help of a literal loan shark, the first official bear & breakfast was born, hoping it would help bring the humans back to town.

The exciting thing about Bear and Breakfast is that it has a pretty in-depth and sometimes dark story that introduces a beautiful cast of characters. As you progress further with your B&B business, you’ll uncover more information about the forest and the mysteries that lie within it. This expands into a much thicker and deeper plot but, unfortunately, it feels somewhat unfinished and left me with more questions than answers.

Your newly-acquired B&B comes pretty bare bones: no furniture, no beds and, indeed, no breakfast. You’ll have to build it from the ground up to make it into a thriving business. Luckily, Bear & Breakfast gives you the freedom to decorate your establishments however you so choose, from building the rooms themselves to choosing all the items that go in them. Everything from the rugs on the floor to the pictures on the wall can be added, but it’s not a simple purchase that makes this happen. All these items will need to be crafted at your trusty workbench using resources you have foraged throughout your travels in the woods.

The decorative items you place around your B&B not only serve the purpose of looking pretty but also add to the overall appearance of your place. See, each guest you book in will have their own preferences and matching these guests to their preferred room is vital to getting the most money out of them you possibly can. Each guest will give you a rating out of five stars after their stay, so doing everything you can to please them is vital for getting the best reviews and more guests staying at your B&Bs.

Bear and Breakfast’s HUD and menu system do take a bit of getting used to, purely because it doesn’t seem to have been tailored to the Nintendo Switch. This system was clearly made for a mouse and keyboard layout; on the Switch, it feels janky and awkward to manoeuvre. If you’re playing handheld, it can be challenging to read the writing or even see where you’re placing objects. On top of that, you seem to have to click through many different menus to get to the one you want, which becomes frustrating after a short while.

The building system itself is grid-based, and as you develop your properties and unlock more and more rooms, it can feel like playing Tetris, trying to fit everything in so that it doesn’t look too cluttered. Annoyingly, some items you try to place don’t actually fit where you want them to. For example, the first item I wanted to place in my B&B was a welcome mat, but I couldn’t place it perfectly in front of the door; it was always off-centre.

Interestingly enough, Hank has no energy system in which he needs to rest or stop doing what he’s doing, meaning you can work all night doing whatever you like. He has a bed in which you can nap to pass the time, but there’s no actual requirement to do that. Hank can also collect and carry as many items as he likes, and I loved the lifting of any inventory limits. How many times do we have to sell items in games that we would later need, purely because we have no space? Well, no more. As Hank will spend most of his time rummaging through various objects to collect items, it’s great to know there is no fear of collecting too much. Yay for hoarding!

When you start out in Bear and Breakfast, it’s clear that completing various quests is vital to progression, making it feel like a bit of a slow-burner. But sticking with this process of fetch quests rewards you with new locations to explore, more blueprints and furniture, and new buildings that can be used as extensions of your B&B business, which would otherwise be locked.

Overall, Bear and Breakfast delivers a wonderful and addictive game that oozes charm from the get-go. Following Hank and his friends throughout his bed and breakfast journey is interesting in many ways, and I’m sure you will love the trip as much as I did. The controls take a little to get used to, but that’s a small piece to pay for such a rewarding experience.

Bear and Breakfast is a cosy and relaxing management sim that offers players rewarding gameplay and an exciting story. The game does suffer with some janky controls and a HUD system that needs tweaking for Nintendo Switch systems, but if you want a management sim that isn’t the run-of-the-mill, this one’s for you.