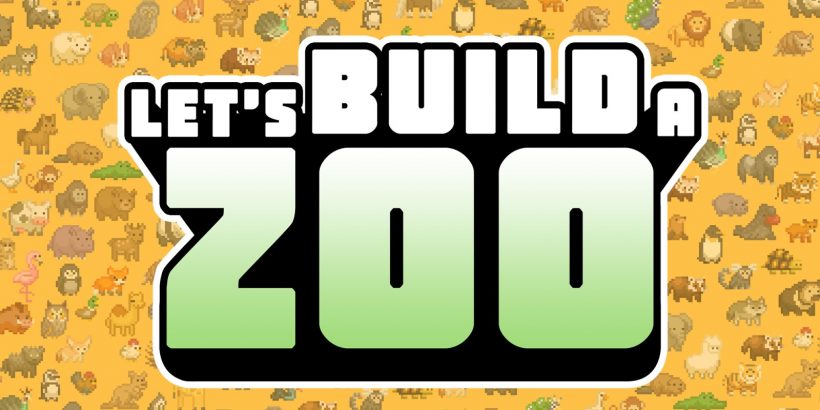 In Let’s Build a Zoo, you build a zoo.

Ok, there’s a bit more to it than that. But your ultimate goal is to grow your zoo from a small sanctuary to a veritable ark of animals and animal hybrids. This is achieved by building more habitats, rescuing or trading animals to gain new species, adding shops and facilities, and all kinds of other expansions.

As is the case with management games, things get more and more complex as time goes on. You’ll go from humble beginnings to struggling to keep track of a hundred habitats, if you have the dedication for it. Not only do you have to take care of your animals, but you have to make sure your customers are happy too. And if your animals are unhappy, your customers sure will be.

Thankfully, the game alerts you when things are going awry. You’ll need to stay on top of your animals’ hunger and thirst, as well as their enrichment by giving them activities and toys to play with. You’ll choose the right habitats, making sure there’s enough space for everyone, avoiding issues with hygiene and health. It’s a lot to manage, but an alert system will make sure you’re aware of things that need your urgent attention.

Unfortunately, navigating to this alert system can be somewhat clunky. The same can be said for the controls in general. Let’s Build a Zoo feels like a game designed with a different control method in mind, so traversing the countless menus and systems is often cumbersome. If the Joy-Con had a few extra buttons to spare it’d work just fine, but as it stands the controls hold this game back from being quite as polished as it could be.

This issue aside, how does the rest of the game fare? If you’re a fan of management games, or zoo games in general, there’s a lot to love. In fact I found myself becoming more addicted as each new animal made its way to my zoo via helicopter care package.

The sense of progression is excellent, and the game achieves this through several methods. The first is the simple act of buying or trading for new animals. Adding new critters to the zoo is always a delight, and as time goes on you’ll be introduced to animals with more complicated, or expensive, needs. It can be tough to keep track of everything, especially as your animals start breeding and requiring more care in their enclosure.

To afford these things you’ll need to hire researchers to unlock new things for the zoo. There’s a sprawling selection of unlocks in the form of a massive grid, where each square unlocks new items like enrichment, decorations, power sources, subway systems, floor tiles, food shops, flowers, trees and so much more. Research points are added naturally over time, and you can eventually add more researchers to speed the process up. This is key to the game’s flow, as it makes sure you’re constantly unlocking new things even if your profit stagnates.

It’s truly satisfying to watch your zoo evolve, especially when you’re the one behind every little decision. And you have to make some big decisions too. These choices can be as critical as deciding whether to rescue animals from a fire, or as goofy as deciding whether to dress a goose up as a peacock to fool your visitors. Some choices will increase your morale, allowing you to build more positive items and buildings. Others will lower it, and if you really want to, you can turn your zoo into a hellscape filled with factories and slaughterhouses.

If you’re like me, most of these choices aren’t really choices at all. I would never sell my animals into a shady black market, I’m definitely not opting to turn my snakes into snakeskin belts, and I’m not going to let my animals suffer to make a profit. Other options are simply impossible to make without going into debt, and they can arrive at rather inopportune times.

Another option sees you choosing between hybrid animals. This is one of the game’s most unique features – the ability to splice two animals into one bizarre combination. You can make a rabbit with the head of a goose, a bear with the head of a donkey, and so on. Personally I didn’t really care for these hybrids, but others will no doubt get a kick out of the sheer weirdness of it all. I’d prefer if the game didn’t force me to make them and add them to my carefully curated enclosures though.

While some of the game’s choices don’t require much thought, it still has a compelling gameplay loop that’ll keep you glued to the screen. It’s fun to be surprised with new animal species, and it’s satisfying to solve problems that arise within the zoo. Like a lot of management games or simulations, it can be a large time sink if you want to see everything. Unlike some, it doesn’t force you to wait before the true game begins, and the learning curve is easily managed.

So all in all, there’s a lot of good things to say about Let’s Build a Zoo. The controls aren’t perfect, and it can sometimes feel overwhelming as a result, but if you’re looking for a witty, addictive game filled with cute animals, you can’t really go wrong here.

If you’re a fan of animals, Let’s Build a Zoo is the perfect game to pick-up — if you’re not easily overwhelmed. It’s packed with content and offers a great zoo management experience, even for the most morally depraved owners.