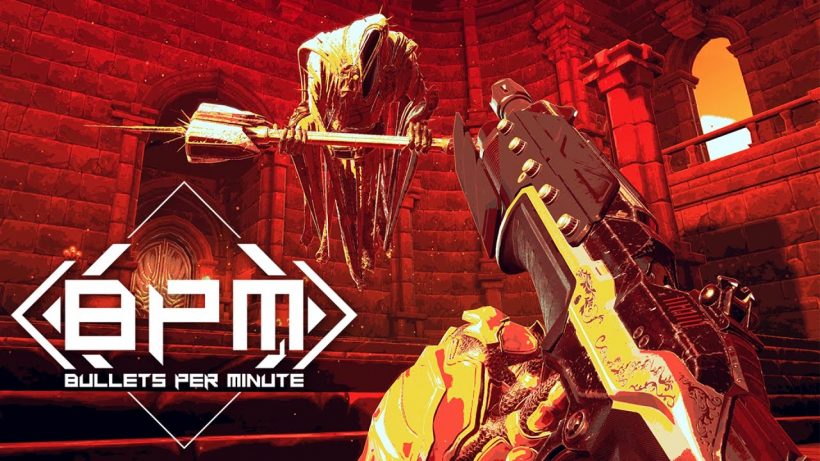 Rhythm games aren’t usually violent for a good reason. Most people want to sit back and enjoy the music without the gameplay being too distracting. However, Bullets Per Minute proves that rhythm, heavy metal, and roguelike elements can come together to create something mesmerisingly addictive without compromising any single element.

Bullets Per Minute is a first-person shooter with roguelike elements. You get your pick of a few different characters, each with their own strengths and weaknesses. Some have new starting weapons, while others can’t use any and deal damage passively but will die in one hit.

The thing that sets Bullets Per Minute apart from anything else you’ve played though is the fact that you can only fire on the beat. Heavy metal music will play throughout, and an on-screen indicator will help you track each beat. This even applies to reloading, with some weapons having three or four-part reload sequences to get through. I missed many shots to start with but quickly adapted. Mercifully, you can turn this off in the settings, but it’s an integral part of the experience, so I’d recommend leaving it on.

As you shoot your way through the rooms of every procedurally-generated dungeon, you’ll open chests with coins, health potions, or keys. Keys unlock special rooms with new weapons or abilities, and coins can be spent on health, armour, weapons, or equipment to augment your character. By beating every room in the first dungeon, you can amass quite the collection and become an efficient killing machine with a shotgun, boots that kill weak enemies, a shield power, and a helmet that causes you to deal double damage. Creating new builds every time you play is part of what makes dying and restarting from the beginning sting a little less. There are enough items in the game that you’ll almost never see the same build twice, adding to the game’s longevity.

Unlike most roguelikes, you see very little progression between runs in Bullets Per Minute. You can bank coins for future runs and unlock new items in the shops by purchasing more items as you play. For the most part, though, you’re playing to unlock challenges and get through the current difficulty mode so you can satisfy the itch to tick it off and move on to the next, much harder, one.

Bullets Per Minute is far from perfect, but it’s got enough going for it that you can sink dozens of hours into it once you get past the initial barrier to entry. This is a difficult game and I wanted to give up several times before everything clicked. At first, you’ll miss beats and shots, wonder how you can become strong enough to beat the first boss and get wiped out multiple times while figuring out what all the map symbols mean. While this is frustrating and will put some players off, it’s necessary because it’s just a result of how well-balanced all the mechanics are.

This isn’t a game to sleep on. If you want something that’s going to pull you in and push you to play for just one more run, there’s no more satisfying game to let sink its metal-infused teeth into you.

Bullets Per Minute is an addictive game that will keep you coming back for more punishment even once you’ve completed it a few times. There’s fun to be had regardless of how much time you’ve got to spare.