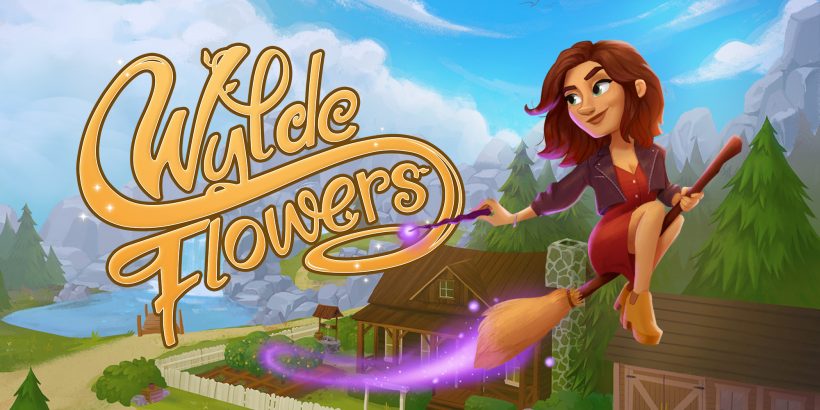 More than ever, video games and other forms of entertainment feel necessary to escape a world embroiled in increasing amounts of turmoil. They provide a certain level of escapism, but as we stumble from one “unprecedented” event to the next, I’ve found that the experiences I crave have shifted quite dramatically. Where once I might not have even looked at a game such as Wylde Flowers—though some of that naivety can be attributed to the whims of adolescence—now such experiences excite me. A running joke after the latest Nintendo Direct was that there were too many farming/life sims. Well, I say bring them on!

There’s an inherent warmth to these titles that just can’t be beaten. Turning on your Switch and playing a game like Wylde Flowers is like being enveloped in a warm hug. It’s comforting. It’s calming. And most importantly, it’s fun.

From afar, Wylde Flowers may look like any other farming sim. You play as Tara, a big city girl who’s traded the grind of the rat race for life on a dilapidated farm. So far so similar right? Well, before long, Wylde Flowers puts its own unique spin on things, and the resulting game is a pleasure to behold. You see, the town of Fairhaven where Tara now resides is home to a secret coven of Witches, among whose ranks is no other than the grandmother that you moved there to take care of! This revelation is something of a transformation for the game, as this enjoyable but familiar farming sim receives a magical spin that elevates it above others in the genre.

The inclusion of magic in Wylde Flowers is certainly what makes the game stand out from a gameplay perspective, but the focus on narrative is what really makes this game shine. In a surprise decision for a game such as this, Wylde flowers is a narrative game first and foremost. Where most games like this drag on until something new comes along and grabs your attention, Wylde Flowers has a clear endpoint that’s quite refreshing to see. That’s not to say it isn’t packed with content. Overflowing with quests to complete, recipes to unlock, and farms to renovate, you never find yourself wanting for anything with this game. Still, the focus on story and character work is what will really have you itching to play.

The cast is one of the most impressively diverse I’ve ever seen in a video game. If you’ve never felt represented in a game before, pick up Wylde Flowers and there’s sure to be a character, or some combination of characters, that you’ll see yourself in. This is an industry in dire need of realising there are all sorts of different people out in the world, and while triple-A studios may be moving forward at a glacial pace, Indie havens like Studio Dryrock prove that representation in games should just be par for the course. There may come a time one day when I don’t have to celebrate a studio for something like this, but until then, those looking to drive the industry forward deserve all the praise we can heap on them.

It’s not just that the cast is so diverse in terms of who they represent though; each has been given their own personality and backstory that provide meaningful substance to your interactions. Slowly building trust between your characters is a highlight of the game. It’s something you work on throughout, and the realisation that what once seemed like a throwaway line was actually pivotal to the motivations of a character gives you a rush of excitement that feels truly earned. Add to all this the surprising fact that the game is fully voice-acted, and you’re immediately sucked into what feels like a truly lived-in world.

Whilst the story and your various interactions with characters are what make the game so special, that’s not to discount the gameplay by any means. If you’ve played any kind of farming sim before, then the basic formula will be quite familiar to you. You go about your daily tasks, you build up your farm, you help revitalise the community. It’s a tale as old as… however long farming games have been around I suppose. The injection of some witchcraft into the proceedings will soon have you cackling, however.

One of my initial reservations about the game is that I felt it had somewhat of a pacing problem. Some of these issues persist, but others you soon realise are vices there to be conjured away with your magic. The use of enchantments and potions soon put an end to the drudgery of slowly traipsing across the entire island for a single plank of wood, although the requirements for many important items and recipes, even at the start of the game, can feel a little unbalanced.

There’s so much more I could say about Wylde Flowers that it actually pains me to draw this all to a conclusion. The very idea of “cosy” games has taken off running in recent times, and Wylde Flowers is a shining example of this type of game done right. The narrative focus is a refreshing break from the norm, and the magical additions only elevate this fact. Simply put, this is a game that’s not to be missed.

Wylde Flowers takes a tried and somewhat tired formula and sprinkles its magic over it for an experience that really sticks with you. Its blending of two genres is a challenge, but one that pays off entirely.