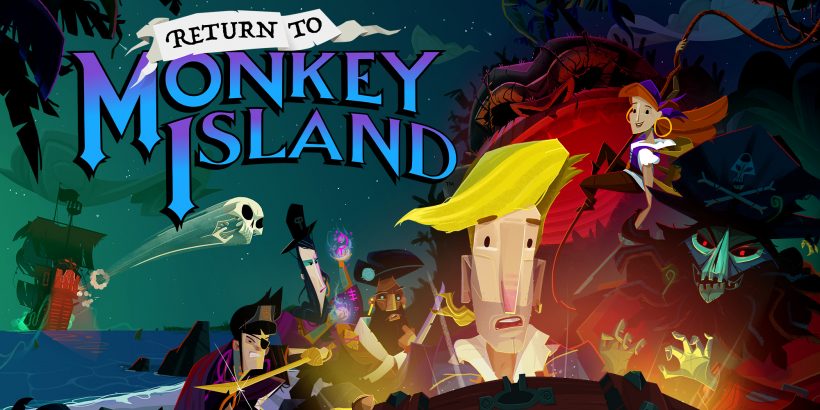 The Return to Monkey Island experience feels like a big reunion tour from a band that’s been on hiatus for 20 years. They pull out all of the old favourites, and fans arrive in droves to try to recapture their youthful energy. But despite that warm sense of familiarity, after all those years something just doesn’t feel quite the same. Rapturous singalong choruses that once captured the spirit of the many now feel just a little too formulaic to those that have undergone decades of growth, and everyone  — both the band and the audience — are just a bit bloody knackered.

Now, that’s not to say that no fun can be had, and just like any good reunion tour covers all the hits, Return to Monkey Island offers the player a best-of selection of Monkey Island series locales and characters, and fans of the series will no doubt enjoy the countless nods to jokes past. However, new players may find that they miss the punchline a little too often. One scene, for example, is a play on the classic insult sword-fighting mechanic that’s featured prominently in the series’ past, in which the player must identify the appropriate verbal retort to counter the opponent’s insult in order to gain the advantage. Rather than rehash the same mechanic, they instead make it appear as if this is what they’re going to do but then quickly subvert it into becoming something else. It’s a smart move for legacy players as they’ll get the joke but won’t necessarily want to do more insult sword-fighting. For the uninitiated, however, it’s much harder to understand the relevance.

This desire to satiate long-time fans is perhaps justified; after all, this is the long-awaited return of Guybrush and LeChuck for hungry fans more than it is an entry point into the series for new ones. Thankfully, the game sports many other classic elements that ensure it’s recognisable as a Monkey Island game, despite the fresh coat of paint (more on that later). Most importantly, with series creator Ron Gilbert finally back at the helm, the writing is as snappy and fun as it’s ever been, and this is bolstered by having all of the original voice actors on board, including, of course, the inimitable Dominic Armato as Guybrush Threepwood, mighty pirate! Oh, and the music is absolutely phenomenal. Lucas Arts veterans Clint Bajakian, Michael Land, and Peter McConnell have all returned to pen the soundtrack for this swashbuckling adventure, and it’s 10/10. No notes. Amazing. Yarrr!

The game takes place in a kind of storytelling format, as Guybrush and Elaine’s son listens intently to his Father tell him of his exploits. Unfortunately, the kid is annoying as hell, and making you play as him for the tutorial section wasn’t the smartest decision. Fortunately, from that point the interactions are fairly slim — only occurring at specific milestones in the story or to recap where you left off if you saved and exited, which would be a nice touch if the kid wasn’t such a pain.

The puzzling is as robust as ever, and Return to Monkey Island’s UI on Switch is exceptionally good in making movement and interaction with objects feel slick, therefore making the puzzle-solving experience as fluid as possible. But Return adds something new to the mix — Casual Mode. There’s already a very well-established hint system in place that will gradually offer you more guidance on your current objective until it essentially tells you what to do, but Casual Mode instead offers the complete game experience in a simpler package, described in-game as “All the story and all the fun but with casual puzzles for the busy on-the-go player.” In a practical sense, it reduces the number of steps in the puzzles, so you may have to collect fewer items in order to complete an objective, visit fewer locations, etc. It’s a very cool middle ground for those that want to enjoy the story without feeling frustrated, but don’t want to feel like they’re cheating by constantly referring to hints. It’s a lovely addition and I hope we see more adventure games take this approach.

Now for the big one. If you were even remotely conscious on social media during the initial reveal of Return to Monkey Island, you will have seen the immediate backlash to the newly chosen art style. Poor old Ron received so much direct harassment for it that he had to shut down comments on his own blog. Of course, this is completely unacceptable, but it does highlight just how impactful this chosen art style was. Gone is the pixel art of the originals, or even the hand-painted detail of the special editions, in favour of a highly stylised and blocky design, full of sharp edges and bright colours. It’s a grand departure for sure, but, frankly, it’s something players need to just get over. It works really well within the context of the game and there’s absolutely nothing lost thanks to the wonderful animations and world details. It’s an exciting, refreshing change; without it, we may really have felt a little too stuck in the past with this long-awaited sequel.

Return to Monkey Island feels like a greatest hits of Monkey Islands past. The overwhelming sense of familiarity is both a blessing and a curse, but ultimately if you’re a series fan, you’re going to enjoy swashbuckling with Guybrush once again.