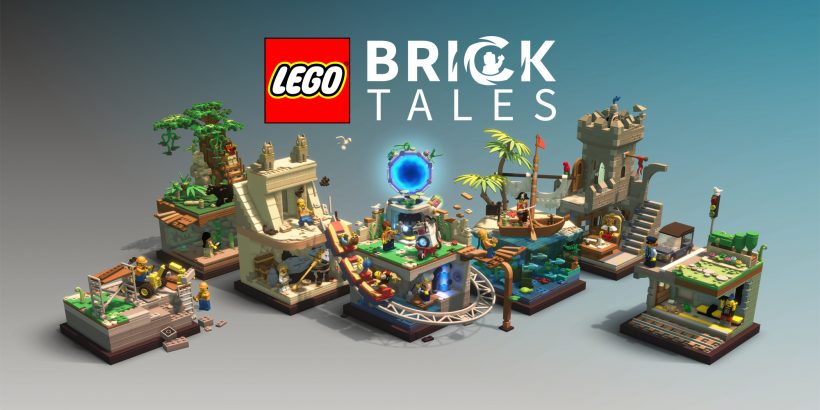 LEGO has quite a storied history when it comes to games. They’ve been releasing them in one form or another since 1995, however, it wasn’t until their licensed efforts in partnership with Travellers Tales that their games really took off in the mainstream. We’ve since seen a steady release of quite fantastic games thanks to this partnership, however, they’ve often overshadowed the more experimental titles. LEGO is such an endlessly creative product, that limiting its games to action-heavy titles such as LEGO Star Wars, always feels restrictive. It’s great to see more niche titles such as LEGO Bricktales enter the mix, it’s just a shame it’s not quite as enjoyable.

The premise of LEGO Bricktales is quite simple. You travel about the world, aiding people with your brick-building and puzzle-solving skills, in an effort to receive gratitude crystals that will help restore your Grandad’s dilapidated theme park. It’s as nonsensical as it sounds, rather even more so, however, the beauty of Lego is that it can be anything you want it to be, no matter how wild the idea seems. The unfortunate problem with LEGO Bricktales is that it doesn’t quite utilise that ideal to the fullest extent.

This isn’t a bad game by any stretch of the imagination. All its ideas are fully formed and make for a somewhat enjoyable experience, it just didn’t excite or intrigue me in the way I was hoping. For example, puzzle solving. Bricktales features some exceedingly challenging brick-building puzzles that will most certainly afford a head scratch or two. You’re limited both in the space you can use, and the number and type of bricks that you have. This really forces you to think outside the box… whilst ensuring you stay inside the box. There’s no time limit to solving these problems, so you’re afforded the luxury of trial and error without penalty, and that feeling of triumph when you finally solve a difficult puzzle is a feeling afforded to the best games of this ilk. The problem lies with the variety of the puzzles themselves.

Much of LEGO Bricktales feels very repetitive. Travelling through just the first world, it dawned on me how many of the things I was building were essentially the same. Bridges are a common theme throughout the game and pose a significant amount of challenge, but that challenge becomes more frustrating than fun when it’s presented so often. What I love most about puzzle games is the variety of different scenarios they can present. Sure, you can dress the same puzzle up in a different outfit, however, that doesn’t negate the fact that it’s still the same puzzle. When you’re actively trying to cut corners in finding a solution, something I personally resorted to rather quickly, it tells me that the game is not holding my attention in the way that it should. It’s a disappointment and one that persisted throughout.

None of this is aided by the fact that the controls whilst in puzzle mode are quite nauseating. Although not difficult to master, they’re far from elegant. I often found myself attempting to place a brick down, only to find it had shot toward the back of the screen. Movement in this mode is far too sensitive, and the camera is an absolute pain to control. It’s a true shame to find the bulk of the game so dishearteningly frustrating to play through.

I’ve painted a fairly dour picture of the game so far, but there’s still enjoyment to be found here, particularly if you’re a creative person. Once you’ve successfully completed a puzzle, you’re given the option to return to it in sandbox mode. Within this, you’re given an unlimited number of bricks to design with, as well as a whole suite of pieces not presented to you during your initial solving of the puzzle. It affords you the chance to return to your potentially crude creations and upgrade them as you see fit. Many of my builds were created either in the interests of efficiency, or in whatever wondrously wild way my brain could imagine in order to achieve the necessary outcome. As such, my designs were far from beautiful. The sandbox mode is LEGO at its finest, giving you the freedom of creativity to craft something in your vision. The options available to you are unlocked through secrets you find travelling through the game, offering an incentive to explore every nook and cranny of the world.

What a world it is! LEGO Bricktales is a beautifully designed game. The LEGO aesthetic provides such a comforting, handmade feel to everything. There’s a sort of rough quality to the design that makes it truly feel as though each brick has been thoughtfully laid by someone attempting to build a vast and wondrous world. So, if nothing else, the game certainly looks a winner.

I can’t say I wasn’t disappointed by LEGO Bricktales. There’s so much potential for a fantastic game here, and it comes close at times, but far too often it’s bogged down by limited design choices and frustrating controls. It’s a refreshingly unique LEGO title, but one that needs a bit more building up.

LEGO Bricktales attempts to capture the excitement that accompanies building LEGO and certainly comes close, however, the experience is unfortunately marred by poor controls and unremarkable puzzles.