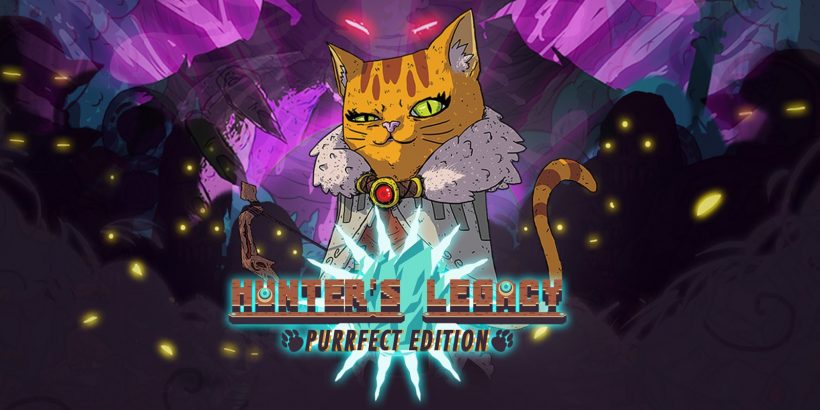 From time to time, there’s a certain genre or style of game that explodes within the indie community, and becomes the latest ‘trend’.

Platformers were the genre of choice when the indie market first took off. Then, there was a period where both rogue-likes and survival games were in turn flavours of the month. More recently, metroidvanias come to mind, with some of the most standout examples of indie games available on the Switch focusing on exploring labyrinths. Just think – Axiom Verge, SteamWorld Dig 2, Hollow Knight, and Dead Cells are all metroidvanias.  Hunter’s Legacy: Purrfect Edition is yet entry in this section of the eShop – but it’s not at the level of those modern classics.

Purrfect Edition isn’t just a port of the original Hunter’s Legacy – it’s also an enhanced version that comes with a couple of improvements and adjustments. Just like its original title, it presents the adventures of Ikki, a huntress humanoid cat that is engaged on a battle against the powers of evil. While this isn’t the most original tale games have ever produced,the player will encounter many different characters along Ikki’s path, each of which contribute to the game’s narrative in their own way. Multi-levelled environments, fully-fledged cities, and dangerous foes are just a couple of other elements you’ll face throughout the game.

Every single one of these elements, from the characters to the scenery, appears in a hand-drawn style. As far as the visuals go, Hunter’s Legacy is somewhat of a mixed bag. One one end, characters, enemies and NPCs are detailed and well-represented, as each one feels like a unique being within the game world. The backgrounds, however, aren’t as appealing as the characters, and look somewhat simplistic due to all their blocks and straight-line edges. Unfortunately, the sound department doesn’t shine much either – most songs are repetitive or forgettable.

Hunter’s Legacy‘s gameplay, on the other hand, is probably the best thing that the game has to offer. The levels are expansive, and they offer different ways for you to explore, with many secrets and optional content to be found along your way. At times, when exploring the hardest bits of the game, platforming can be a little rough around the edges, especially when you consider the game’s imprecise collision system – a consequence of the block-based level design, probably. However, Hunter’s Legacy combat is pretty interesting and can become quite complex as you progress.

At the very beginning, Ikki is equipped with only her double swords, which she can use to swipe at enemies in close-range combat. In true metroidvania fashion, as you advance, you’ll get additional equipment, skills, and magic powers. Finding these are the main motivation for continuing to plough through the game. You’re always looking forward to finding the next upgrade that will expand your exploration options, or a new power-up that can be used to aid you during combat.

Despite some roughness around the edges, the improvements of the Purrfect Edition are most welcome. This is definitely the best version of Hunter’s Legacy, and comes with many quality-of-life improvements, including a new map. If you have never played Hunter’s Legacy, this is a cool and comparatively cheap option for a new metroidvania to occupy your time until the big hitters such as Axiom Verge 2 and Hollow Knight: Silksong are released.

Even though this Purrfect Edition is a revamped version of the original Hunter’s Legacy, it is still a bit far from being a true perfect material. Nevertheless, even with some rough edges here and there, Hunter’s Legacy still provides an enjoyable metroidvania experience, all thanks to a complex combat and wide upgrade options.