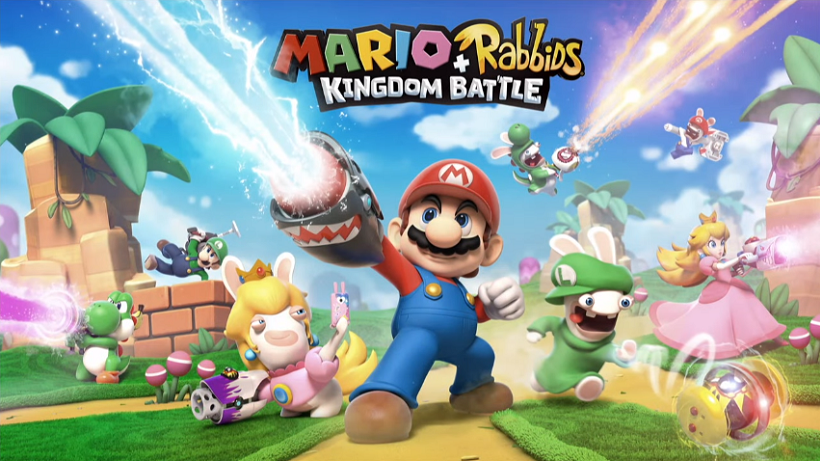 I can’t believe I’m saying this, but a game featuring Rabbids is one of the best games I’ve played this year!

I will admit, I was a bit dubious when the leaks started surfacing around the Mario + Rabbids crossover game, however any doubts were soon cleared when Shigeru Miyamoto and Yves Guillemot took to the stage at E3 to officially announce that the rumours were real. Not only did they confirm that Mario + Rabbids Kingdom Battle was a thing, but they also shocked the world by showing us all a Rabbids game that actually looked pretty good!

Starting off in the real world, we see a young girl working on her latest invention – the SupaMerge. This device is a pair of goggles that can be used to merge two objects together, but currently there are a few teething issues with the piece of tech. The girl is clearly frustrated with these technical issues, so decides to call it a day and leaves her basement work station. No sooner has she exited, the Rabbids arrive in their time-travelling washing machine and start causing chaos. It doesn’t take long for one of the Rabbids to find the SupaMerge and somehow merges it with himself. Mayhem ensues, and soon this Rabbid (who later gets named Spawny) starts uncontrollably merging everything in sight – including his fellow Rabbids with various Mario themed memorabilia that decorates the girls workshop. In an attempt to escape the havoc, the Rabbids get back into the washing machine and prepare to time-travel, but not before Spawny and a Mario poster join them – sending them catapulting to the Mushroom Kingdom. Spawny continues on his merging spree and most of the Rabbids go rogue – leading to Mario and friends to teaming up with Rabbids in Mario costumes to try and restore order to the Mushroom Kingdom.

Once the opening cutscene is over, the rest of the story is delivered mainly through the dialogue of a friendly AI called Beep-O – who you control as you lead Mario and two other party members through the four worlds that you will need to play through in order to complete the game. The story itself is very simple, and the humour is very much slapstick – seemingly aimed at the younger audience, although there were a few times where I found myself chuckling at the self-referential humour on display.

Appealing to the younger audience is no bad thing though, and it does make Mario + Rabbids a great introduction to the turn-based strategy genre. When the first footage of the game was revealed, comparisons were instantly made to the XCOM series, however Mario + Rabbids is a lot more welcoming to newcomers and uses simple presentation and an unobtrusive menu system in a way that helps you understand the effects of your actions in battle.

As mentioned earlier, you have a three-strong team to take into battle against the Rabbids (plus environmental enemies that occasionally pop up such as Boos and Chain Chomps). Your starting party is Mario, Rabbid Luigi and Rabbid Peach but as you progress further through the game you will find and recruit other team members – such as Rabbid Mario, Princess Peach and Luigi. Each of these team members has specific skills, and more can be unlocked by spending collectible Orbs to upgrade each characters skill tree.

You can swap between party members on the fly when not in battle, and you will need to carefully consider how best to approach each battle as your party members are not returned to full health until you complete a stage. Some of these stages can have multiple battles, so being good at party management is crucial – especially later on in the game when healers and tank characters are introduced into the Rabbid ranks!

As you delve deeper into the game, you will soon find that you have a wide range of skills at your disposal – and it is great when you successfully manage to chain attacks together in order to gain the upper hand. Characters can slide tackle foes before using a teammate to springboard to higher ground prior to taking cover and shooting another enemy – and you will feel like a boss when you pull of a perfect round. There are a lot of skills to be acquired as you earn more upgrade orbs, and working as a team is encouraged throughout – with some fantastic team moves that will see your party work together to make short work of your foes.

As well as using orbs to unlock more skills, there are also coins that you will find lying around the world and will also be awarded for completing stages. These coins can be used to purchase new weapons for your heroes once you have unlocked them by either finding them in the chests that are dotted around the world or by progressing through the main game.  Each character has two weapon slots, one for a primary weapon and one for a secondary. The primary weapons are the guns you will have seen the likes of Mario and Rabbid Peach wielding in the game’s promotional shots. There are Blasters (standard guns), Bworbs (a futuristic yo-yo that acts like the Blasters), Boomshots (read Shotgun), Precision (a sniper rifle) and the gatling gun-esque Rumblebang. These guns are all specific to certain characters, so you will need to experiment with your party and plan your attack based on the effectiveness and range of your arsenal. Not only do these weapons pack a punch, but they also can have elemental effects that include Honey (sticking enemies to the spot so they can’t move), Fire (causing a burn effect at will make enemies run around randomly trying to put the flames out -drawing them out of cover) and Ink (blinding enemies and removing their abilities) among others.

Secondary weapons are only secondary by name, and I would encourage you to use them as often as possible! The only downside with these is the cooldown period between uses, meaning that you can only use them every couple of turns. These secondary weapons include melee style mallets for both Marios, homing sentries that explode for Rabbid Peach and Luigi, exploding rubber Grenaducks that Peach and Rabbid Luigi use and Rockets for Rabbid Luigi and Yoshi. I found most of these secondary weapons packed as much of a punch as their primary counterparts, and evened the odds in some of the harder battles.

Not every stage is the same “defeat x amount of enemies” – some of the eight stages that make up each world will see you tasked with reaching a safe zone at the other end of a map that is filled with respawning enemies or escorting a character (usually Toad or Toadette) from point A to point B without them taking too much damage. This keeps proceeding fresh, although for some reason the difficulty does seem to ramp up pretty quick after world two. The boss levels at the middle and end of each world are also great fun, and often add environmental puzzles into the mix to make battles more than just who can dish out the most damage.

I particularly found the game’s first major boss battle, against a Rabbid version of Donkey Kong, to be an example of a boss that took brains as well as brawn to beat. I spent the first five minutes shooting him, taking small amounts of HP off him – only for him to eat a banana from a pile in front of him that refilled his health. The penny soon drops and you will realise you have to move your party across the map to the green area where the bananas are placed, causing them to fall through a trap door so you can attack him and do some permanent damage.

If you do find yourself getting troubled by the game’s difficulty at any point, you can switch to “Easy” mode at the start of any battle by pressing the Y button. Doing this will see your party’s health restored and gives your team fifty percent extra health – so if you do find yourself getting stuck on a particular stage you can always fall back on this mode. Once you have beaten a stage, you will receive a rank based on how many turns it took you to complete the level and how many party members survived the battle – the higher the rank, the more coins you are rewarded with and these are used to purchase more powerful weapons for your squad.

Outside of battles, you will guide your trio around the vibrant, colourful worlds of the Mushroom Kingdom. The game looks fantastic and feels like a Nintendo-crafted Mario title. Looking in all of the nooks and crannies will see you find treasure chests that will yield orbs, weapons and items to view in the game’s gallery as well as finding catapults that will shoot you off to take on bonus challenges and the like. There are also environmental puzzles dotted around that break up the action and are used to proceed to new areas or to gain additional unlocks – these are often quite straightforward but working out the solution is great fun!

Speaking of fun, it is clear that Ubisoft clearly enjoyed their time working on this game, as so much love and passion has gone into making Mario + Rabbids Kingdom Battle. There are countless references hidden away here that Mario fans will enjoy uncovering and I found myself playing this game with a smile on my face throughout. There were times when I felt the difficulty was a little off – I was clearing battles within ten minutes with “Perfect” ranks but some stages took me an hour of trial and error tactics to get full marks. Overall, I think these spikes did improve me as a player, but I dread to think how younger players will handle this unexpected rise in challenge.

There are also co-op missions in the game that are unlocked once you finish each of the game’s differently themed worlds. These levels up the party limit from three to four, and see you and a friend take turns during the action. Aside from this nice little addition once you have beaten each of the worlds, I don’t feel Mario + Rabbids Kingdom Battle offers much on the replayability side – so once you have unlocked everything you probably won’t go back to the game unless you purchase the DLC that is due to release for the game at a later date.

That aside, Mario + Rabbids Kingdom Battle is a fantastic addition to the Nintendo Switch’s library. Ubisoft has come up with a winning formula that many people doubted would work. The Italian plumber seems to be able to adapt to any genre and the turn-based strategy genre is another one he can add to his ever expanding repertoire. Whether you are a fan of the genre or not, I would wholeheartedly recommend this game to anyone who likes Mario – and who knows, like this writer, you may end up liking those raucous Rabbids after all!

Mario + Rabbids Kingdom Battle is a mashup that shouldn’t work, but does! Taking Nintendo’s beloved mascot and combining him with their own, love them or hate them Rabbids – Ubisoft has made a Mario game that feels every bit a Nintendo first party title. Aside from some odd difficulty spikes and a lack of replayability, Mario + Rabbids Kingdom Battle is a fantastic turn-based strategy title that both newcomers and fans of the genre should definitely experience!