There was a time where point-and-click adventure games were all the rage, with fiendish puzzles stumping all sorts of people. In recent years this genre has seen a resurgence – such as Thimbleweed Park – and with the original release of Stick It to The Man on the Wii U eShop back in 2013. Four years is quite a considerable amount of time, making a platforming based point-and-click-esque adventure game would’ve been novel then, but isn’t enough to carry it above its shortcomings today.

An act of fate results in protagonist Ray hit on the head one day during work at a construction site and later discovers a psychedelic “spaghetti arm” coming out of his head, one that only he can see. What’s more, some mysterious agency is now after you because of what they assume is in your head, and have taken Ray’s girlfriend (because it’s 2013/17 and apparently other motivations don’t exist). It’s not all bad though, as you can now read the minds of people/animals – living or dead – drag objects from their thoughts and insert them into the minds of others, as well as grabbing drawing pins to propel yourself around. 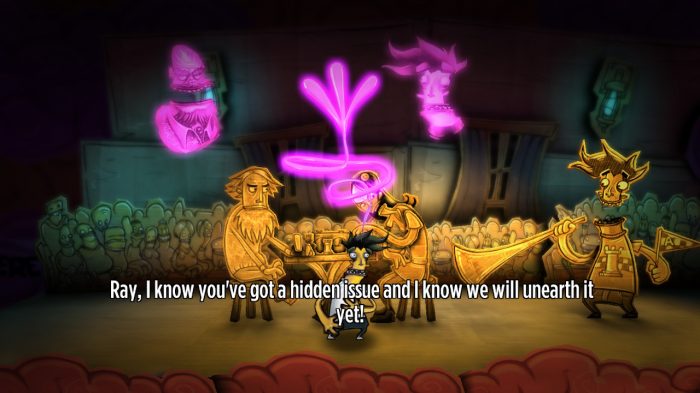 This is all visually possible thanks to the pleasing graphical style, which is like Paper Mario but crossed with a blend of Psychonauts and the work of Tim Burton. Everything looks as if it was made from either paper or cardboard and some of the logic of the world is informed by this. Further similarities to Paper Mario come from the latest game Sticker Star as stickers play a prominent role in Stick It to The Man (get it?) as they are crucial for solving the puzzles necessary to progress. 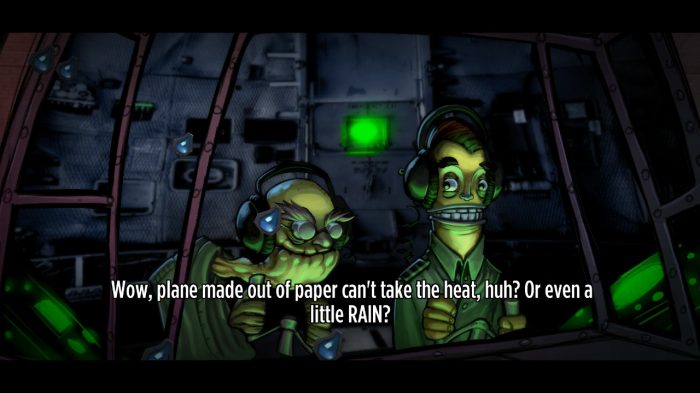 Objects represented in sticker form are diverse but mostly serve one purpose and it’s often easy to determine what they’re for with little effort. Sometimes a sticker or two will be required to produce another sticker that is needed to move forward, the entire process is just a visually unique way of depicting familiar fetch quests, and the novelty of this approach loses adhesion quickly.

What doesn’t help are the “stealth” sections incorporated into the platforming. Movement is functional, but a bit too floaty, yet when combined with the necessity of not getting caught by cut and copy enforcers gets old after the very first encounter. It provides minor frustration, little challenge, and no sense of achievement. 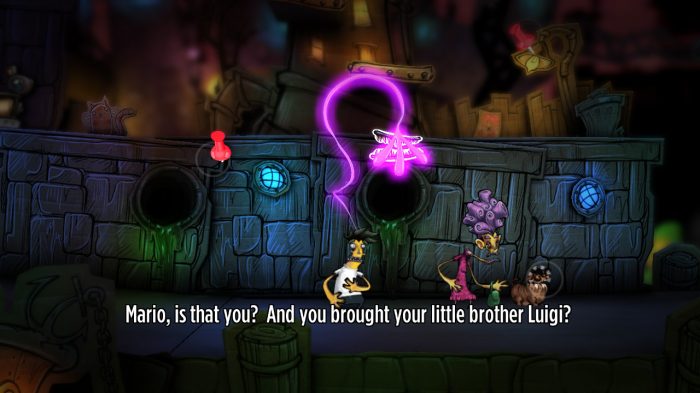 Overlapping everything is the games tone and sense of humour. Again, it draws inspiration here from Psychonauts and Tim Burton, but the lead writer Ryan North – who has worked on the Adventure Time comic – brings in more irreverent humour as well as a more “mature” attitude. Whilst this means that this is not suitable for children, it is by no means “grown up”, as many aspects are rather crude, whilst others come off rather angsty. Thankfully none of this comes from Ray – who is the most likeable of the entire game – keeping the game bearable and preventing it from becoming an entirely tedious experience.

Stick It to The Man is an accessible adventure with a lot of effort having gone into the games visual style to significant effect. It’s unfortunate that same can’t be said for the gameplay that accompanies it.

Stick It to The Man

Stick It To The Man is a perfectly functional but forgettable experience due to the tedious elements of the game. The Tim Burton-esque visual style and black humour fails to catch up to its influencers, but offers just enough to be worthwhile to those who share these interests.

One thought on “Stick It to The Man Review”