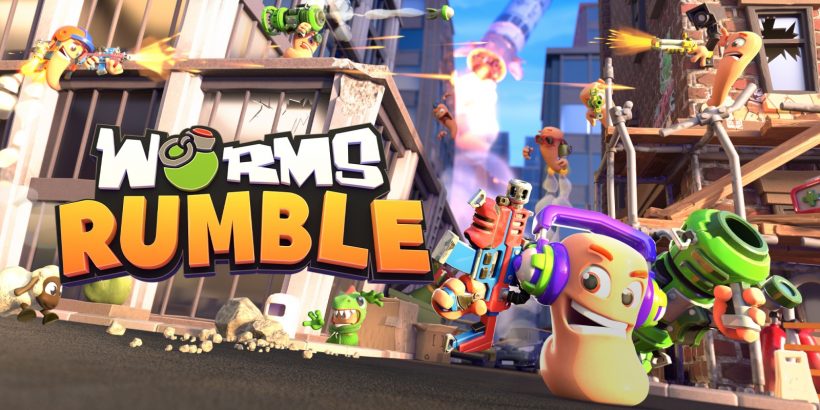 Every time we think about a classic video game franchise, we probably remember them at their pinnacle.

When you think about all these different entries, you may notice how long-running franchises have a tendency to try different things. Yet, they would keep the most common elements intact. When it comes to Worms, it would be snarky characters with funny lines, crazy weapons with unique effects, destructible scenarios, and a turn-based combat system. As one of these ‘attempts at something different’, Worms Rumble brings back a few of these classic Worms elements. What is changed, though, transforms it into a game that has very little to do with Worms at all.

First and foremost, you need to know that Worms Rumble is a completely multiplayer-focused game. With the exception of a very short (and not very good) tutorial, there is not a single offline mode for you to try. Worms Rumble is all about multiplayer madness, and it offers a handful of maps that are shared between four different game modes.

The main gameplay differs a lot from what you expect from a Worms game due to how it all happens in real-time. With a much more action-focused gameplay style, you need to control your own Worm with a side-scrolling twin-stick shooter control scheme – and here is where Worms Rumble starts to crumble. The twin-stick controls really get in the way of the fast-paced action you’ll find in Rumble, because there’s an extremely steep learning curve when you consider the combination of the fast movement options, the many actions that you need to access with the face-buttons, and the left-stick aiming – and it only gets more complicated when you consider the intricacies of each weapon available.

The arsenal is where Worms Rumble resembles a classic Worms game the most. From Shotguns and Bazookas to the more iconic Holy Hand Grenades and Sheep Launchers, Worms Rumble features many different weapons for you to find throughout each match (if you’re lucky). Each one will have a different projectile pattern and will demand a different approach. However, their efficacy is more limited now when you consider that Worms Rumble doesn’t feature destructible scenarios like previous instalments. Your success is more linked to your map knowledge and proper positioning than learning specific weapon effects.

As a multiplayer title, Worms Rumble features basic game modes such as Deathmatch and Team Deathmatch, where you go solo or with a team to try and get the most kills in a set amount of time. That’s not all, though, as Worms Rumble also follows the most recent multiplayer trend, and offers two Battle Royale modes. In Last Worm Standing and Last Squad Standing, you (or your squad) will only have one life during the whole match. In this mode, as time passes, parts of the map will be filled with toxic gas, forcing players to get closer and face each other. Despite being the most unique game mode available in Rumble, the Battle Royale counterpart has a serious problem with matchmaking. Even with the cross-play option activated I would have to spend several minutes to find a match, and when found it would never be a filled 32-player game.

As a ‘Game as a Service’, you could guess that Worms Rumble will receive many improvements and new additions over time. As it is, you have a great number of items for customising your characters available (with also a great number of paid content included). With a “season” approach, Rumble is bound to receive more content in the form of The Lab – a seasonal game mode that has different rules applied. Unfortunately, though, that won’t be enough for the time being, because this Switch version also needs a considerable number of technical improvements.

During the matches, the most common problems were related to the performance. At the most basic level, Worms Rumble fails to deliver a steady frame rate and resolution. The variable resolution results in a blurry view during heated moments, which only gets worse when you also have a few frame drops at the same time.

Remember, this is a multiplayer-focused title, so problems like these more often than not result in an unexpected death. To make matters worse, Rumble also features a few inconsistent bugs, which include menus that freeze in place, and respawn buttons ceasing to work. Sadly, when you consider the sum of its parts, Worms Rumble is a game that proposes a new gameplay style for the series, but fails in almost every aspect.

Worms Rumble takes a few elements from the Worms series and recontextualizes them as a multiplayer-focused and action-based title. On top of failing in its most basic gameplay elements, the Switch version also features many annoying bugs.