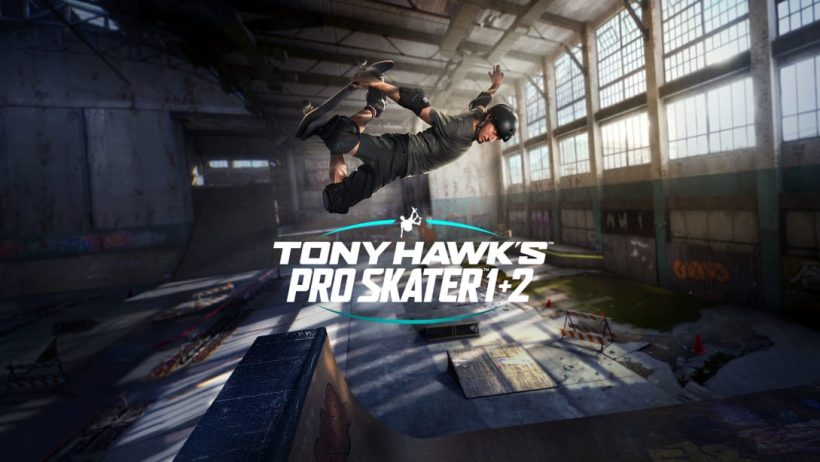 1999… I’ll never forget it. It was the year The Matrix was released, the Euro became the common currency of the European Union, and let’s not forget the massive freakout about Y2K (if you thought the toilet paper purchasing freakout when Covid started was bad…).  Perhaps one of the biggest events of 1999 was the September release of Tony Hawk’s Pro Skater on the now-retro systems of PS1, N64, Dreamcast, and GBC.

And now the year is 2021, and on top of skateboarding being included, for the first time, in the 2021 Tokyo Olympic Games, gamers around the world can live (or re-live) their skateboarding dreams through the Tony Hawk’s Pro Skater 1 + 2 port on Nintendo Switch.

Booting up the game, players can start with either 1 or 2. At first there will be very little choice: you’re Tony Hawk and you’re playing level one. However, as you progress through the game you will unlock things like new skaters, boards, decals, outfits and so on. Playing through the career mode, and completing challenges, will put money into your wallet to spend at the in-game store. Starting from the bottom is never easy, so don’t expect the money to instantly start pouring in. This game is a lesson in the value of persistence and hard work.

If you’re a Tony Hawk pro, you will likely hop straight into the game and all those sick ollies and kickflips, but if you are new to the series there is a tutorial to get you going.

This tutorial is akin to a dull teacher trying to drill quadratic equations into your skull: mind-numbingly long! For someone brand new to the world of video game skateboarding, I found that after every new trick and mechanic introduced I’d forget the one Tony had previously taught me. Press B to ollie, press A and tap a direction to flip, hold X to grind rails but press X while travelling at a specific angle to the edge of a half-pipe you can do a fancy balancing thing to hold the tip of your board on the edge, Y is flip tricks, oh and you can switch your stance with ZR and do it all the other way! Got all that? Okay, here are fifteen more things on your controller you can do. Great, now go have fun!

If you’re new to the game, skipping the tutorial isn’t a recommended option either as this is one of the most frustrating games to be bad at. Watching your skater “bail” (also known as “falling off the skateboard and crashing painfully to the ground”) over and over can easily induce controller-throwing rage.

The hardest hurdle of Tony Hawk is the beginning, and should players persist, getting good at the controls will provide a wonderful feeling of accomplishment as your skater lands your perfectly timed tricks. There are plenty of game modes to keep players entertained. Playing solo you can skate your way through career mode, hop into a free-skate, or unleash your inner designer in the Create-A-Park or Create-A-Skater modes.

Making your own custom skate park is an open-ended and creative endeavour. There are a lot of objects you can place into your park: obvious stuff like ramps, half-pipes and railings, but also things like pools, trees, or picnic tables. There are also “smart objects” that you can pull, expand, and bend to your whim, and this really allows for a person’s individuality to shine. Before you know it, several hours will go by designing your dream-park.

If level design is more your preference, Tony kinda hits the brakes on any real aspirations you may have. Not only do you need in-game currency to buy things like new boards, but you also need it to buy the objects for the level-editor. On top of that, some objects (and of course they seem to be the neatest ones) are also locked behind a level-cap. If you want skaters to hop over a plane you had better enjoy career mode because you won’t be able to until your skater hits level 100.

If you have a handy-dandy Nintendo Online subscription, you can upload your levels for others to enjoy. You can also take advantage of the online multiplayer modes: play games like Tag and HORSE with others and see your name on the online leaderboards.

Graphically, the game has been significantly improved from the original. What were once blocky and blurry polygons are now character models that look like actual humans complete with separate fingers! The soundtrack still features all of that 90s punk music that the game originally had, plus some new stuff too. It stays true to the musical vibe that helped make the game so popular back in ‘99.

The world of skateboarding has come a long way; it’s delightful to see more female representation not only in the sport itself, but also in the game. Players can now make a female character in Create-A-Skater mode (something that was not in the original game, woo progress!), as well as the roster of new professional skaters featuring several awesome ladies. There are all kinds of things to collect, and secrets to unlock, in each level also.

If you were a fan in ‘99, then you’ll likely have a good time re-living the new and improved game.

Tony Hawk’s Pro Skater 1 + 2 does a decent job of bringing the game into 2021, however it falls short in a few unnecessary ways that might keep newcomers to the series from enjoying it.