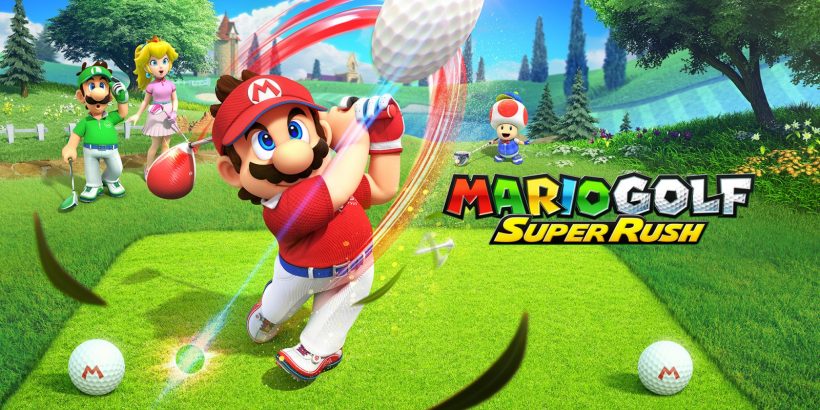 It’s been a long time since Mario set foot on the green on home consoles, with the Gamecube’s Mario Golf: Toadstool Tour in 2003 being the most recent entry to grace our television sets. The question is – after a nearly two-decade hiatus – is Camelot’s latest entry, Mario Golf: Super Rush, worth the wait and your time? Well, it feels strange to say, but perhaps things might have been better if we’d waited a little bit longer…

The joy of Mario Golf is that it’s always managed to strike a perfect balance between genuinely great, intricate golf mechanics that allow you to feel in control, with just the right dash of Mario madness to add enough spice to the formula to entertain you and your friends. Mario Golf: Super Rush definitely has some great ideas and interesting twists on the formula at the very least, but a lot of the problems lie in the execution. First up is your basic multiplayer golf, with both local or online modes available. You can, of course, play standard golf where you simply play a few holes, trying to get the lowest score you can, but you can also play online in both of the new modes: Speed Golf and Battle Golf.

Speed Golf seems to be taking a few tips from the Mario Kart school of multiplayer shenanigans, because as well as trying to putt as proficiently as possible, you’ll also be running from each hole to the next with opportunities to either boost your speed or knock other characters over in a hilarious goof on the golfing formula. It’s pretty funny careening around the courses and crashing through Donkey Kong on your way through, especially when you play with a few friends and the threat of being knocked over yourself is constant.

Yet, while Speed Golf definitely shakes up the formula, it feels shallow and sometimes like a change for the sake of change. When the normal golf mechanics are still so tight and genuinely satisfying, it can be a little annoying to throw that out of the window for a much more chaotic few moments inbetween regular golf. Meanwhile, when you boost your character there’s no option to cancel if you reach the ball. Often you’ll shoot way beyond your target and lose precious seconds from your score. Not to mention, it makes playing golf take quite a bit longer, and it wasn’t exactly the swiftest sport to begin with.

Next was Battle Golf, a mode clearly inspired by Battle Mode in Mario Kart and with even more wackiness to set itself apart. In Battle, players attempt to capture three flags by using any skill or power their character has to land a hole. Because the Battle arena is completely open, there’s no penalty for how many swings it takes, but you’ll have to deal with a lot more hazards. Despite there being only one arena, it’s jam-packed with different mushroom kingdom enemies to manoeuvre around, as well as regularly changing effects that add interesting new wrinkles to every passing moment. Battle Golf feels slightly more fun thanks to the fact it’s so far removed from regular golf that it’s fun just to let loose and embrace the chaos. It’s a shame there’s only one course, however, as it meant that this mode became tiring far too quickly.

In terms of online performance, both modes work competently but there are a few issues. Firstly, in our time with the game, we still had some issues with framerate dropping and losing connection. It’s beyond frustrating to play several rounds of golf only to lose it all thanks to issues like this, and with titles like Monster Hunter Rise offering higher framerates with more action and options for when connections break, it’s an abrupt and upsetting shift to be kicked out of a game after 20 minutes of painstaking golf. There’s also a lack of options, including any sort of tournament mode. Online worked more often than it didn’t, but I’m beyond giving Nintendo the benefit of the doubt with online infrastructure when other games are wildly outshining them on their own device.

Finally, the other big difference in Mario Golf: Super Rush is the Adventure Mode, a single-player experience that offers a short blast of challenges tied together with a vague narrative. If I’ve seemed unenthusiastic so far, brace yourself. It can be unfair to expect huge sprawling RPG elements in Mario sports titles, but something similar to previous entries could at least be passable. But the Adventure Mode here manages to be forgettable, and infuriating in several different ways.

Playing as your Mii character, it’s your task to challenge each individual course to earn badges, garnering experience and equipment along the way to improve. It’s a simple system that should have been a great framework, but almost everything works against it. From the very first moments, the characters and dialogue are gratingly dull, with each speech bubble of text quickly becoming just an obstacle in between the action. While the host of familiar Nintendo characters are present, none of them stick around long enough to be interesting, and the writing here is sadly flat. Even later on when bigger characters are introduced, the presentation and writing rarely ever lift anything above monotony.

When you finally do get to play a few rounds, despite the fantastic base mechanics on display here, you’ll be replaying courses often and also will be met with some truly maddening conditions – including a series of tornados and gust billowing clouds that nearly drove me insane. It’s not all bad though, because the simple, whimsical tale on offer isn’t awful by any means, and a lot of the challenges are actually pretty fun. There are even a few boss fights later on that test the more advanced skills you’ll learn in interesting ways and add some much-needed spectacle. Overall, the Adventure Mode was a mixed bag of fun moments, interspersed with some dull and often infuriating moments that dragged down a package that wasn’t strong enough to begin with. It’s mercifully short (if you don’t get too stuck) though, and if you really don’t fancy it, it’s luckily not the only way to unlock the game’s six courses.

In the good pile, it should be mentioned that Mario Golf: Super Rush looks great, with a nice visual clarity that shows Nintendo understand the hardware and their own characters. The roster is similarly fantastic, with characters like Pauline and King Bob-omb making appearances, along with signature special moves that set each apart. It’s a great way to add some much-needed tactics to the game, and every character feels well realised with great models and animations. The music is fairly flat though, with no real motif or strong character at any point, and some moments in Adventure Mode were dragged down even further by this dullness. A final mention should also go to the motion controls, which work fantastically. I’m glad the option is here, and it’s done well. You might not be using it constantly, but when playing with friends it helps elevate the game and build on the fun party atmosphere.

Ultimately, the saving grace of Mario Golf: Super Rush is, luckily, just golf. Because underneath the lacklustre single-player campaign and a couple of mixed attempts at shaking up the formula, the base mechanics are still absolutely rock-solid, and a few games online with your buddies can be a blast. There’s not much to mention about the mechanics as this is simply Mario Golf, but if it ain’t broke, don’t fix it. If that’s all you want from a Mario Golf game then you might be happy enough with the product here to purchase it, and it’s also a solid foundation for whatever DLC Nintendo has planned, including the recently revealed level based on New Donk City. But, we can’t review content that isn’t here yet and it also only serves to point out how much content feels missing from this package right now. With only six main courses, a very brief story and the fleetingly interesting extra modes, it’s sad how hollow this package feels.

As of right now, I’d cautiously recommend Mario Golf: Super Rush if players simply want to play golf with their friends. However, if you were hoping to be entertained for multiple hours thanks to the Adventure Mode and the new Speed Golf & Battle Golf, that mileage may vary. For me personally, I felt the Adventure Mode was an exercise in tedium that, despite its shortness, still outstayed its welcome. Meanwhile, the other new modes were brief distractions, but ultimately didn’t do anything good enough to stand out, nor was there enough content to enjoy them for long enough anyway. Sadly, Mario Golf: Super Rush feels a little…rushed, so unless you’re a diehard fan with some friends ready to join you on the course, maybe don’t rush to buy this one.

While the core of Mario Golf is fantastic as always, there’s very little around it with Super Rush in either content or variety to keep players entertained. If you want to play a few holes with friends then this is everything you need, but anyone hoping to be blown away by new modes will find this latest release to be sadly just par for the course.