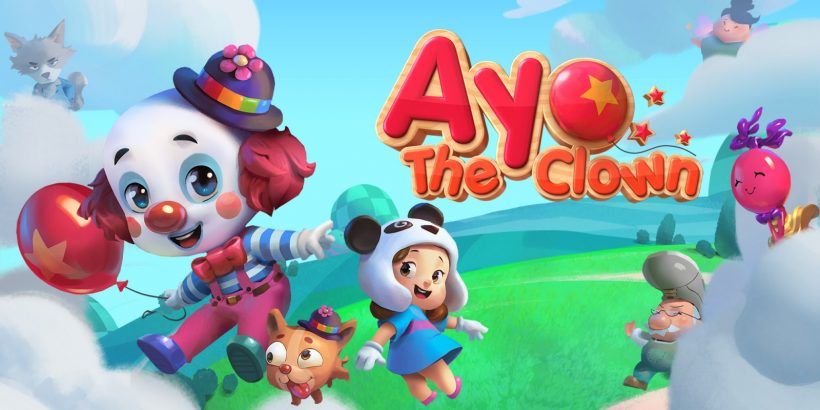 Being a clown can be challenging. Regardless of how your day is going – good or bad – you’ll be called upon to entertain people and make them laugh with some slapstick action and a plentiful plastering of face paint. Poor Ayo isn’t having such a good day. His faithful dog has gone missing, and so the only course of action is to put on his bravest clown face and find his four-legged buddy.

This task is presented in the form of a gloriously cute 2.5D platform game, and it only takes a few steps in Ayo’s oversized shoes to spot the major sources of inspiration here. Developer Cloud M1 has evidently learned from the best, with plenty of Nintendo’s DNA running through Ayo The Clown’s veins. Specifically, there’s a very obvious Yoshi’s Crafted World feel to proceedings. Looking further back, Kirby’s Epic Yarn (Wii) might be another influence. It’s there in the cutesy characters, jolly tunes, playful spot effects, and soft-focus backgrounds. But this obvious copycat behaviour shouldn’t be interpreted as a criticism, because Ayo sprinkles on enough ideas of its own.

Things take a surprising turn from the beginning. This may be a platformer, but initially Ayo doesn’t even have the luxury of a jump ability. This skill – like others throughout the game – is introduced when our clown completes a certain task during the side-scrolling levels. It’s not long before he gains his jumping shoes, but nevertheless it is refreshing to play a platform game that doesn’t want you to take anything for granted.

Once Ayo gains a little red balloon, his jump ability has a little extra lift: press B once to jump, and then hold B while he’s in the air for Ayo to inflate his balloon to levitate that little bit further. It’s a satisfying variant of a double-jump ability that soon becomes second nature.

Levels usually follow a left to right path, but there’s an element of exploration both above and below to find hidden gems and collectibles. There are often subtle clues in the landscape to indicate a direction worth exploring, one of those classic Nintendo devices, right there. Enemies can be defeated with a jump on their heads, although on occasion the collision detection may seem a little too pixel-specific in its requirements. Certain power-ups can also be found that offer a limited amount of usage, including water balloons that can be lobbed ahead, and a wooden sword to take swipes at enemies who are proving to be a more immediate threat. Spikes and bottomless falls off-screen are amongst the hazards in your way, but generally Ayo The Clown doesn’t offer too much of a challenge. This is particularly apparent by the option to tweak the difficulty level; Cloud M1 has ensured anyone is capable of coming along for the ride.

Certain moments in each level are divided by brief cut scenes, in which you’ll come across a friendly character. Often, they will give you a task to complete in order to gain an extra ability; for example, a fairy requests that you help her find some yummy chocolate, while the mayor asks that you clear the area of rampaging rats. These brief appeals for help offer interesting diversions, but the game also features sections within its levels that completely change the dynamic. Ayo may temporarily gain a tank, or don an upturned boot and become a fire-breathing dinosaur, burning everything in its path to gain gems. These creative interludes are indicative of an intention to keep the player on their toes. The occasional boss fights also mix up gameplay requirements.

Character animation is filled with personality, and the scenery changes often enough to keep the visuals fresh. Although the game is presented in 2.5D, that point five of extra dimension is used by the obstacles around Ayo rather than Ayo himself, who tends to follow the 2D plane. A large hammer in the background for example springs towards the screen, before retracting to allow safe passage. It’s a neat effect that adds to the charm.

It would be easy to pin this game as being particularly suitable for a younger age group with its bright colours and gentle thrills, but the truth is that Ayo The Clown – like Yoshi’s Crafted World – can be enjoyed by anyone of any age that is capable of spotting fun when they see it. But hey, if you’re a Switch player, surely you already fit that category!

Platform games exist within a crowded genre, built upon a rich heritage. The Switch is the best console for platforming action, and there are more than enough first-party releases to play, most of them featuring a well-known plumber. Ayo The Clown manages to stay afloat where many others would simply drown under the competition. There aren’t anywhere near as many levels to explore as you would find in Super Mario 3D World or Donkey Kong Tropical Freeze, or perhaps quite the same level of polish, but Ayo is an enjoyable undertaking that crams in a lot of fun for less than half the retail price of the big hitters. Who says that only Nintendo can do Nintendo?

Ayo The Clown offers platforming antics by numbers, and it’s a crowded genre with some big jumping shoes for company. But there are enough fresh ideas to warrant a deviation from the well-worn first-party platforming path.