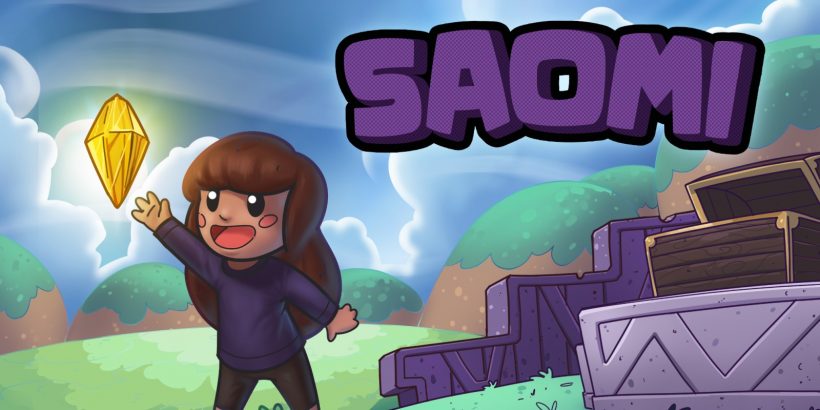 This might be the hardest review I’ve ever had to write. Not because SAOMI isn’t any good, or because it’s difficult to decide whether it’s good or bad — nothing like that. SAOMI is simply a perfectly capable, utterly unoriginal game.

I mean, in almost no way does it bring anything to the table. If you like this kind of game, you’ll like SAOMI, you just won’t really remember it in a few months’ time. There’s no real reason to buy it or to pass on it. There’s really little else to say…

Let’s at least set a scene here: SAOMI is a retro, single-screen, precision platformer, spread across 60 levels. Like Duck Souls, Dungeon Escape, Rite, Hatup, and countless others, SAOMI looks to piggy-back on the immense success of two of the genre’s most revered ancestors: Super Meat Boy and Celeste. Unsurprisingly, it doesn’t come close to that sort of greatness, but does manage to offer a prototypical experience, suited to both beginners and those firmly obsessed with masocore gaming.

Playing as diminutive adventurer SAOMI, your task is as simple as you’d expect: reach the door on each screen by traversing a series of carefully placed platforms, spikes — a lot of these — and mobile enemies. Die, and you’ll merely restart at the beginning of the current level, no sense of lives being lost or significant punishments enacted. It’s classic fare: the developers clearly see nothing broken here, certainly nothing in any need of fixing.

Initially, during the levels that make up a protracted tutorial, your movements are limited to a jump and, soon after the start, double-jump. After 20 levels — one-third of the game — you’re gifted a dash and the game really begins. It’s at this point that the action really veers into Celeste territory, with tight gaps and perfect positioning the order of the day. Checkpoints also become more and more common in Normal mode, which makes this difficult game slightly less so. In fact, SAOMI is definitely on the easy side, requiring just an hour or two to complete, even at the harder difficulty level.

As core mechanics go, there’s no problem with what’s on show here — jumping feels just as ‘heavy’ as you’d want, the dash sends you a pleasing distance, and the levels are designed well enough to provide a challenge that’s clearly surmountable with the smallest of practice.

Visually, the game is nothing to write home about, while being perfectly adequate. Some of the background details are a little ropey, but everything in the foreground, that you’ll actually interact with, is functional and attractive without being particularly memorable. Actually, once more, it’s just reminiscent of similar games, including the aforementioned Hatup which, as it turns out, the developer was also responsible for. In that game, there was at least a gimmick. Oh, and touch-screen isn’t recognised for the menu. The tiniest of flaws, admittedly, but it reflects an overall lack of effort that makes it very difficult to get enthusiastic about this game.

SAOMI is, for all its playability, just a very basic, derivative entry alongside other, superior efforts.

With almost no bells or whistles, and zero innovation, SAOMI bets everything on its level design. Thankfully, that core gameplay is pretty good, you just won’t be playing this one for long before moving on.