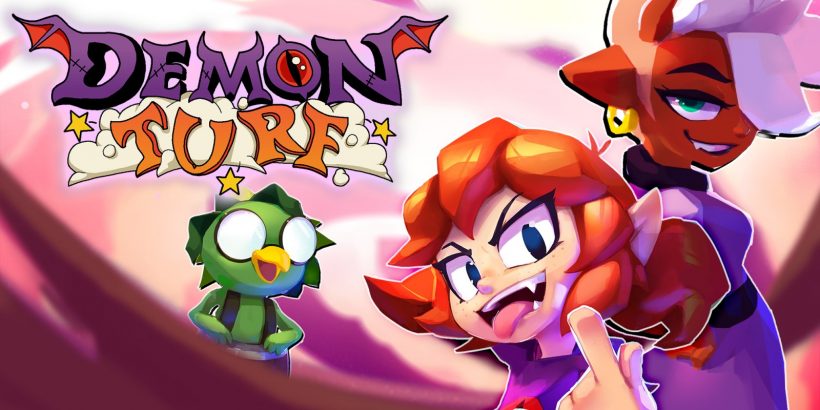 While there are a few select types of games that are extensively explored by AAA developers (open world games, first-person shooters), other genres feel almost like a thing from the past.

3D platformers are the prime examples of this phenomenon. There was a time where they were one of the most popular genres. However, nowadays, if you remove Nintendo from the table, there are barely any other companies developing 3D platformers — at least, not when it comes to the AAA market. Thankfully, indie developers are starting to explore the genre too, presenting their own reinterpretations of what a 3D platformer can be. We saw examples of that in titles such as Yooka-Laylee, New Super Lucky’s Tale, and Toree 3D.

Demon Turf is the newest indie entry to the genre, and it’s a title that stands out amongst the crowd for many different reasons. The first lies in the fact that it comes from Fabraz, the developers of Slime-san and Skellboy (respectively, a 2D platformer and a 3D action RPG). You could say Demon Turf looks and feels like a weird mixture of these two titles, because it takes the platforming essence from Slime-san and mixes it with a revamped version of Skellboy’s visuals. At the same time, though, it is also its own entirely unique thing.

In Demon Turf, you control Beedz, a young demon full of attitude, who has decided to take their chances at overthrowing the Demon King himself. Before she can have a real go at that, though, she needs to deal with the hierarchy of the Demon World. This means that, throughout the campaign, you must visit each one of the five titular Demon Turfs, stealing the batteries that these gangs have at the end of each level, until you can finally defeat the big baddie that controls each region.

In keeping with most 3D platformers, the narrative of Demon Turf acts mostly as an excuse for you to explore different scenarios and engage with the levels and side-activities. Sure, there are a few interesting characters to meet along the way, including the stoic Luci, and the helpful Midgi (not to mention the different bosses and some funny random NPCs), but the story becomes secondary once you start to deal with the best that Demon Turf has to offer: its platforming mechanics.

On this matter, Demon Turf uses its basic structure as a way to present a familiar, but very welcoming gameplay loop. Basically, the city you start in works as a kind of central hub, where you can find NPCs to talk with, shops, and also the entrance to each one of the five turfs available in the game. If you want to make a comparison, you’ll find here something akin to Super Mario 64’s Castle or Sunshine’s Delfino Plaza. Each turf also works as a secondary hub, from which you can access each of the seven levels available, plus the boss room.

This structure of multiple levels inside a hub adds a lot to Demon Turf’s variety, and is fundamentally linked to the way the game encourages the player to use Beebz’s full motion capabilities and extra skills. This happens thanks to the way each level presents something unique. Sometimes, for example, it is a more linear map that demands you show off your platforming skills against different hazards. At other times, though, levels consist of an expansive, exploratory area that you can roam freely to find items. That’s just to mention a couple of examples.

As a consequence of such variety, Demon Turf can be a very challenging game. From the very start, Beebz has a wide array of movements — jumps, double jumps, wall jumps, and spins are just a few examples of movement skills that can all be linked together in different ways. As if that’s not enough, you will also unlock additional power-ups as you progress, which can expand Beebz’s moveset in even more complex ways. While other 3D platformers tend to have a very lenient skill curve, with really difficult segments only at the very end, Demon Turf will demand you master Beebz’s moveset in order to finish the game, let alone to complete its many side-missions.

While this challenge can be extremely satisfying when you’re dealing with platforming segments, Demon Turf comes with a combat element which, unfortunately, is its weakest link. By pressing ZR (or holding for a more powerful attack), you can throw punches in the direction your camera is facing. These punches don’t damage enemies directly, though. Instead, you can only push enemies around the arenas, which always have some kind of hazard that can damage both you and enemies. This physics-based combat feels floppy and unresponsive. Thankfully, it is not bad enough to ruin the experience, but it is the least pleasant aspect of Demon Turf, for sure.

The game’s qualities clearly outweigh the problematic combat, and Demon Turf has a huge amount of content that can last dozens of hours, if you are up to the challenge. From interesting levels to gigantic bosses, Demon Turf offers a superb platforming experience that is brilliantly framed with a unique and interesting art design — well-worthy of a spot in the hall of great 3D platformers available on the Nintendo Switch.

Demon Turf reinforces the 3D platformer genre with an experience that is familiar, yet unique; challenging, yet rewarding; complex, yet engaging. With a distinct art style and superb level design, it is a blast to play — even if the combat is not up to those same standards.