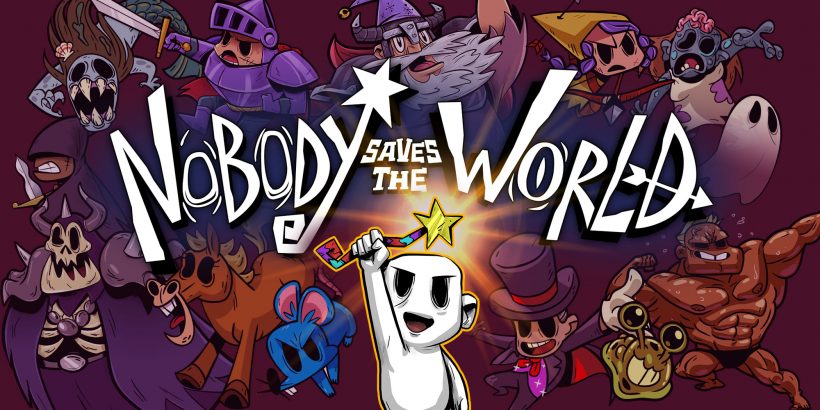 They say that two heads are better than one, but what if you had eighteen heads? With that kind of brain power you will be flipping switches, solving riddles, and defeating hordes of baddies in no time!

Nobody knows who Nobody is, not even Nobody knows! Despite this completely unknown status, this hollow-eyed, pants-less individual is the protagonist of our story. Waking up in a dirty little shack with no memories would take a toll on anyone’s sanity, but finding out that an ancient Calamity has re-awakened as well? Talk about having a bad day. After stumbling through a crime scene, snatching up a magical wand, and escaping a dungeon, Nobody sets out on a quest to save the world.

Brought to us by the Canadian DrinkBox Studios (also the creators of Guacamelee), Nobody Saves the World is a top-down Action RPG full of kooky characters, an intriguing story, and plenty of wacky humour.

Players first start out as original hero: Nobody. Nobody has one attack (a pathetic little slap) and leaves a bit to be desired. Luckily, once in possession of the magic wand, you will unlock the character-tree that allows you to change into a myriad of different forms. For example, Rat (the first form) can chomp baddies for dark damage and poison status effects, as well as fit through tight spaces.

Each character eventually has access to four different moves. A character’s base attack is always attached to the B button, and when you use this move it will restore Nobody’s mana bar. As you level up your character you will unlock the rest of their arsenal on the Y and A buttons, and these attacks will use your mana. Now, the X button is where things get really interesting. Players can attach any other character’s Y or A attacks to the X button of any other character.

This mechanic leaves players a lot of freedom to customize their favourite characters and create their own unique play style. Each character also has four slots for passive abilities; one slot has the character’s own passive, and then three other slots can be filled by whatever you want. Make your Monk’s fists poisonous, or have your slug’s tears stun enemies!

Each dungeon is situational and has different requirements to be successful, so being flexible with your passives, moves, and characters is truly the key to success in this game.

Holding down R will bring up a character wheel that allows for quick switching between roles. The wheel doesn’t have enough room for all eighteen characters, and unfortunately, there is no way to lock in your favourites. Instead, if you need to change to a character that isn’t in your wheel you have to go into your menu and manually select it from there. Once you do, this new character will replace one on your wheel that you haven’t used in a while. This can be a bit annoying, but luckily the menu pauses the game (where the wheel does not) so it doesn’t become too frustrating changing between characters.

And changing characters is the name of the game. There are several gameplay mechanics that will require you to do the ole switcheroo quite often such as: fitting into tight spaces or having to do a particular type of damage to enemies.

The gameplay is engrossing and engaging, it’s easy to pick up and difficult to put down. Nobody Saves the World will also let players bring a friend along to join in the fun. Either online or locally, you and a friend can hop into a game together and tear the Calamity a new one!

This game is already a ton of fun by yourself, but it’s a million times more exciting with a friend. You don’t even have to start a new game, you can pop a friend into your save file at any time. Any progress they make leveling up your characters is saved if you decide to go solo again. They have access to everything you do, and they can go in and customize their characters their own way without affecting yours. It truly is the best of ALL worlds!

The music in this game is absolutely spectacular. Composed by Canadian singer-songwriter Jim Guthrie (look him up, he does all kinds of awesome musical things), this soundtrack absolutely bangs. Each tune sets the mood and is catchy as all get out.

Similar praise for the artwork: it’s amazing and unique, silly and dark. Our protagonist, Nobody, is seriously lacking in eyeballs, and subsequently, every form he changes into is likewise visually deficient. There are plenty of over-the-top emotions spewing out of each character’s lovingly drawn face, and the environments are full of life (even if it is pulsating).

All in all, there is a lot to love in Nobody Saves the World. An interesting story wrapped up in simple, yet engaging, gameplay mechanics with a killer soundtrack and fantastic artwork to back it all up. The multiplayer makes this game truly shine; even if you’re the kind of gamer who prefers to go solo, so consider getting a buddy (either online or local) in there to help you in your noble quest to save the world.

Nobody Saves the World is a quirky and engaging little action RPG. With smooth controls, awesome art and sound, plenty of customization options, and fantastic multiplayer; you should definitely consider adding this one to your Switch library.